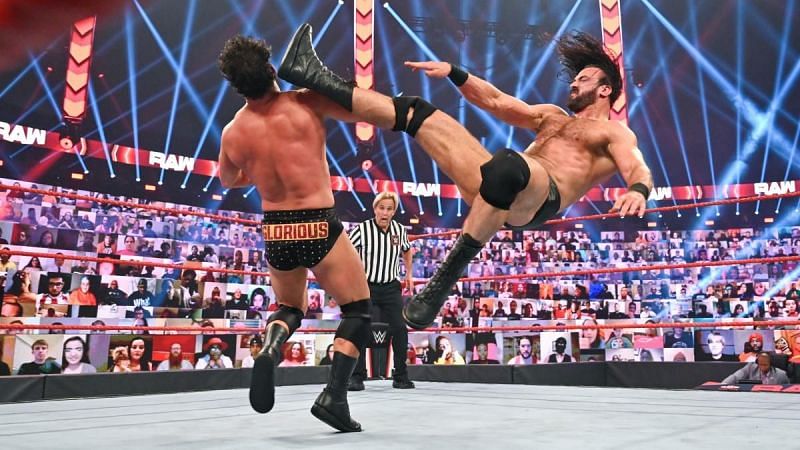 Drew McIntyre recently faced off against Ricochet as part of an open challenge on WWE SmackDown, and The Scottish Warrior later revealed that he wasn’t sure he hit his finisher, the Claymore.

Since McIntyre moved to SmackDown in the 2021 WWE Draft, he has issued several open challenges. Sami Zayn and Mustafa Ali previously answered the invitation, and The Scottish Warrior defeated them. When Ricochet stepped up, he delivered a valiant effort, but McIntyre still emerged victorious.

During a recent interview with Sean Ross Sapp, the Scottish star shared his thoughts on this match. He praised Ricochet’s athletic ability and revealed that he didn’t believe that the match-ending Claymore made contact with his opponent.

“…I wasn’t sure how the connection was, but the timing of it, you couldn’t mess up a split-second,” said McIntyre. “[Ricochet is] such a freak athlete that he’s going to do what he has to do. It’s on me to do my part to look the way it’s supposed to look. When I went in and made the connection, I wasn’t convinced the connection was that good.”

“I think even fans were unsure, it happened so quick,” McIntyre continued. “They played the replay and I was watching it with them and you heard the reaction, so my reaction, and I was like, ‘Oh wow, it came off exactly how I wanted it,’ probably better than I wanted. It was just so split second, you had to watch the slow-motion replay to see it.”

McIntyre has executed the typical Claymore countless times, but in this bout with Ricochet, he hit the move in mid-air. As a result, there was a chance something would go wrong, but everything went according to plan.

McIntyre has used the Claymore to win some of the biggest matches of his WWE career in recent years. But some fans might be surprised to know that an amusing accident was responsible for the creation of this move.

The former WWE Champion has opened up about the creation of this move several times and noted that he unintentionally came up with it in 2013.

McIntyre was initially going for a big boot to the head of his opponent, but because his pants were too tight, he had to jump with it to avoid ripping them. The move garnered quite a reaction from the WWE Universe, and McIntyre subsequently decided that it would be a perfect finisher. As a result, the Claymore was born.

What do you think about McIntyre’s comments? Sound off below.