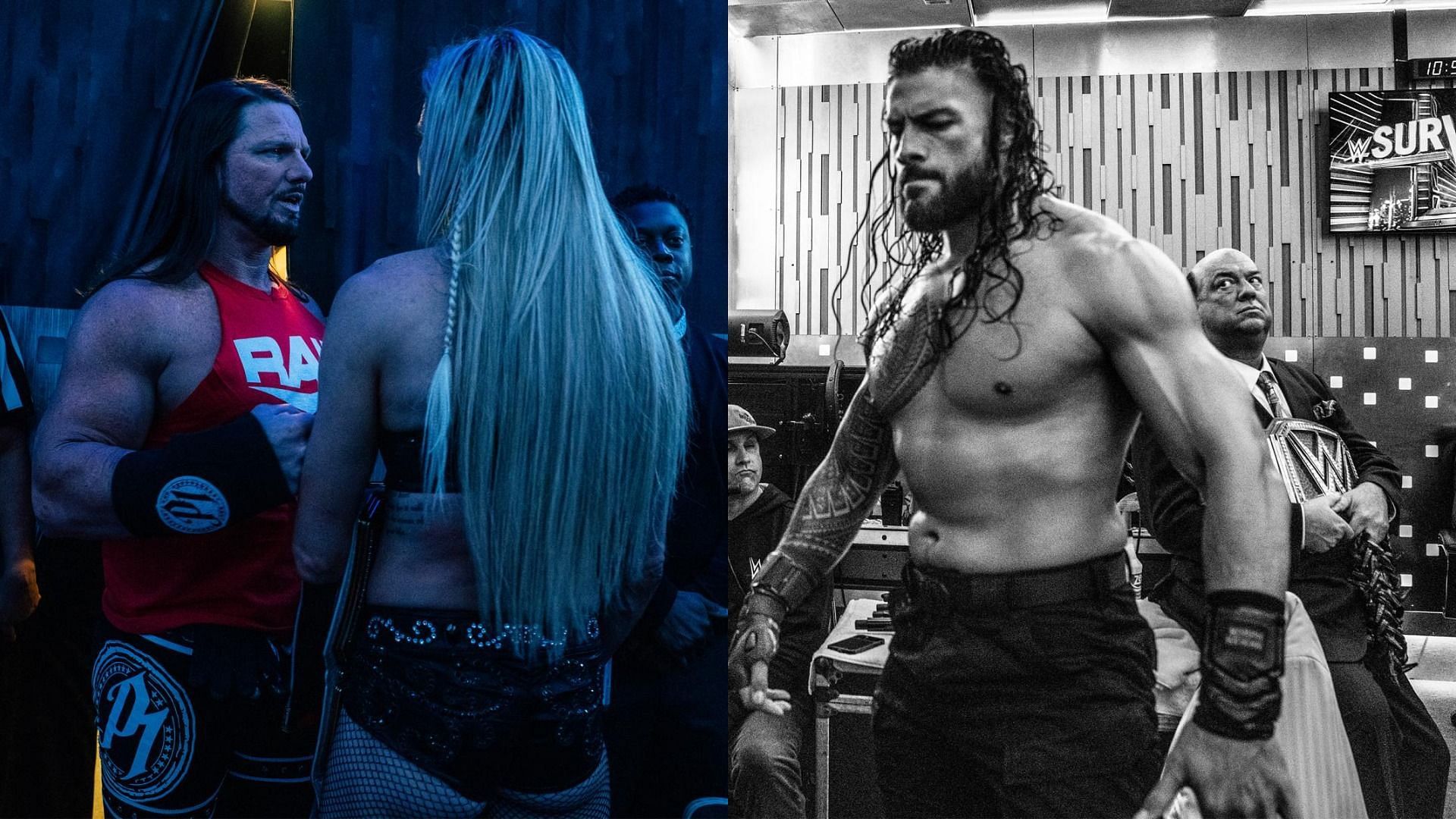 This past Sunday, WWE presented their last pay-per-view of the year, Survivor Series 2021. The show saw the roster of Monday Night RAW and Friday Night SmackDown battle each other for brand supremacy with the former coming out on top.

Survivor Series 2021 was also a special occasion as it marked the 25th anniversary of the WWE debut of The Rock. The show was filled with multiple tributes to him. The fans in action witnessed some amazing matches between the superstars from RAW and SmackDown. While all this was going on, there was a lot happening backstage as well.

Let’s take a look at 10 behind-the-scenes photos from Survivor Series 2021 and check out how the atmosphere was behind those curtains. Be sure to comment down and let us know your thoughts on the pay-per-view and the pictures!

Survivor Series 2021 was a memorable night for 14-time world champion Randy Orton. Currently holding the RAW Tag Team titles alongside Riddle, Orton broke the record of most WWE pay-per-view matches this past Sunday.

The above picture shows Randy Orton and The Original Bro, together known as RK-Bro having a fun conversation backstage. The Viper can be seen having a little meal as well. The two faced The Usos at the pay-per-view and came out victorious.

#9 The man who stole the egg

Survivor Series 2021 saw Vince McMahon make multiple on-screen appearances. The WWE Chairman had the golden egg of Cleopatra, which he claimed was gifted to him by The Rock. This was all done to promote The Brahma Bull’s new movie on Netflix, Red Notice.

During the show, the egg got stolen and McMahon angrily ordered Adam Pearce and Sonya Deville to find the superstar who stole it. The next night on RAW, Austin Theory was revealed to be the culprit.

Instead of punishing him, Vince McMahon gave Theory a title shot at WWE Champion Big E later that night. The above picture shows Austin Theory backstage at Survivor Series. He was part of Team RAW in the five-on-five elimination match.

#8 The Tribal Chief with the Wiseman at Survivor Series

Survivor Series 2021 saw Universal Champion Roman Reigns defeat WWE Champion Big E in the main event. The pairing of Reigns and his special counsel Paul Heyman has been an absolute hit on SmackDown. The latter has, in many ways, helped put over the entire Tribal Chief persona through his brilliant character work.

The above picture shows the two having a little conversation before the pay-per-view at the commentator’s table. Find someone who looks at you the way Heyman looks at his Tribal Chief!

#7 Imagine an alliance between these two

Paul Heyman and MVP are two of the best managers on WWE television currently. By aligning himself with Bobby Lashley, MVP has almost given a new life to the career of The All Mighty.

The above picture shows Heyman and MVP having a candid conversation before Survivor Series 2021. If not for Big E dethroning Lashley as the WWE Champion, we could have seen some amazing promo battles between these two gentlemen on-screen as the managers of Reigns and Lashley respectively.

#6 The Man before her match at Survivor Series

Survivor Series 2021 kicked off with a war between RAW Women’s Champion Becky Lynch and SmackDown Women’s Champion Charlotte Flair. The real-life animosity between the two was a huge topic of discussion before their match, which turned out to be an instant classic.

The above picture shows Lynch backstage in the gorilla position with WWE equipment visible in the background. She won her match against Charlotte Flair at the pay-per-view, although in a rather controversial manner.

Seth Rollins had a great night at Survivor Series 2021. He was part of Team RAW in the five-on-five men’s elimination match against Team SmackDown. After a hard-fought battle, it came down to Rollins and Jeff Hardy. The Architect managed to keep his calm and delivered a Stomp to Hardy to become the sole survivor for his team.

The above picture shows Seth Rollins backstage at Survivor Series before his match. A camera crew can be seen behind him, recording the action. Hopefully, we’ll see some of this footage in a future WWE documentary.

#4 The Queen and The Phenomenal One at Survivor Series

Survivor Series 2021 wasn’t a great night for SmackDown Women’s Champion Charlotte Flair as she lost her match against arch-rival Becky Lynch. AJ Styles, on the other hand, was part of the dual-brand battle royal, which was eventually won by his tag team partner Omos.

The above picture shows The Queen having a conversation with Styles. The two have previously competed together as a team in season two of WWE’s Mixed Match Challenge in 2018. Two of the best pro-wrestlers in the world at the moment!

#3 Getting ready for the big night!

While we all know WWE because of the superstars that perform on our television screens, there’s a much bigger crew that plays a crucial role. This includes the make-up artists, hair-stylists, and others who get the superstars ready to face the cameras and an arena full of fans.

The above picture shows Carmella backstage at Survivor Series getting her hair done. Accompanying her is Kayla Braxton who has made a name for herself as one of the prominent backstage interviewers and panel hosts for WWE.

Carmella was part of Team RAW in the five-on-five women’s elimination match against Team SmackDown at Survivor Series.

#2 Just soaking it all in

WWE Champion Big E faced his biggest challenge yet at Survivor Series this past Sunday in the form of Universal Champion Roman Reigns. While he was not able to defeat The Tribal Chief, he put up a great showing and proved to his critics that he belongs on this level.

The above picture shows Big E before Survivor Series, sitting on the custom chairs and soaking it all in. He has been amazing over the last couple of months and has quickly established himself as the biggest babyface on the current roster. Big E is currently feuding with Seth Rollins and Kevin Owens on RAW.

#1 Before entering the battlefield at Survivor Series

Drew McIntyre and Sheamus are best friends as well as arch-rivals. After a heated feud against each other earlier this year, both were drafted to SmackDown last month during the 2021 Draft.

The above picture shows McIntyre and Sheamus backstage at Survivor Series, just about to enter the arena through the curtains. The two were part of Team SmackDown in the five-on-five elimination match at the pay-per-view but couldn’t take their team and brand to victory.