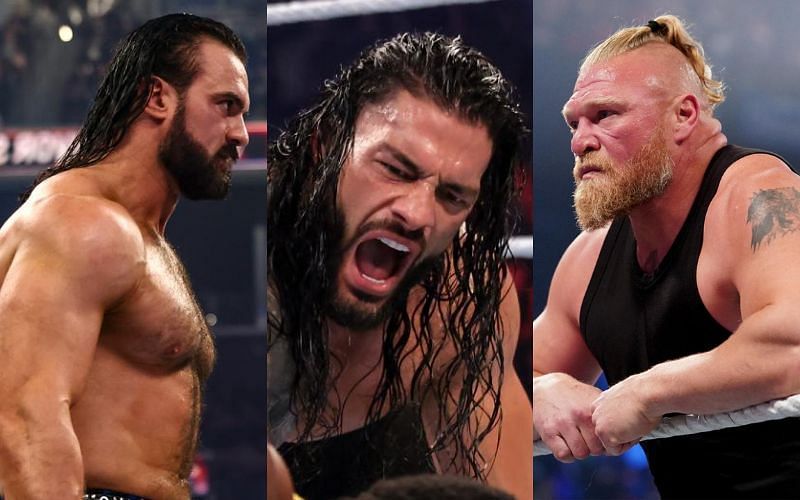 We are all set for WWE SmackDown’s first episode after the Survivor Series pay-per-view. The blue brand suffered a crushing defeat in the battle for brand supremacy, with only two superstars picking up a victory for the Friday Night SmackDown – Roman Reigns and Shinsuke Nakamura. Tonight’s show would require the brand to step up their game.

Here, we look at the biggest things that can happen on WWE Smackdown this week. So, without further ado, let’s begin.

#5 Roman Reigns meets his next opponent on WWE SmackDown

Roman Reigns was one of two champions from SmackDown who picked up a victory at Survivor Series 2021. He faced WWE Champion Big E in an entertaining match that pushed both titleholders to their limits. The match eventually ended with The Tribal Chief standing tall after a taxing main event.

After the pay-per-view, it was confirmed that Reigns’ next challenger will be revealed on WWE SmackDown tonight. The video used in the post included clips of several potential challengers including Drew McIntyre, Jeff Hardy, Sheamus, Happy Corbin, King Xavier Woods, and Sir Kofi Kingston.

Paul Heyman recently said that Roman Reigns’ next goal is to make the blue brand better, and thus, the fans are anticipating an epic rivalry in store for the Universal Champion.

“The next goal for Roman Reigns is clear, and that is to be better tomorrow than he is today. His goal is to be better in two weeks than he is next week, to make next week’s SmackDown better than this week, and to make the SmackDown that airs in three weeks better than it is in two weeks. Roman Reigns continues to set the pace and achieve levels that no one in WWE has ever or will ever achieve. The world has the privilege and joy of watching it unfold every Friday on SmackDow,” said Heyman.

Interestingly, it was also confirmed at Survivor Series that Brock Lesnar’s indefinite ban has been lifted. The Beast Incarnate was penalized for wrecking half the WWE SmackDown roster and even ended up paying a million-dollar fine. However, he is now free to return and challenge Reigns for his gold once again.

It is worth noting that The Usos lost the match against RK-Bro at Survivor Series after Jimmy Uso was pinned. Roman Reigns wasn’t happy when the same thing happened on WWE SmackDown a few weeks ago.

He held his cousin accountable for losing and might do the same once again tonight. Moreover, it will give King Woods enough ammo to go after his old rivals once again. Thus, it will be interesting to see what’s in store for The Bloodline on the show this week.

Sasha Banks was the captain of the WWE SmackDown Women’s Survivor Series team. However, she was betrayed by her teammates Shotzi, Natalya, and Shayna Baszler. This proved costly for the trio as Bianca Belair from RAW pinned them all to pick up a significant victory for the red brand against all odds.

Now, Banks has enough reason to go after all three of her teammates who compromised the victory for personal reasons.

The Boss will look to address the events that transpired at the recently concluded pay-per-view and confront Shotzi, Natalya, and Baszler. She has been involved in a feud with Shotzi on WWE SmackDown since the beginning of this month.

The writers now have enough to continue this narrative and push both superstars into the title picture with the help of an intense rivalry.

#3 Drew McIntyre and Jeff Hardy team up on WWE SmackDown 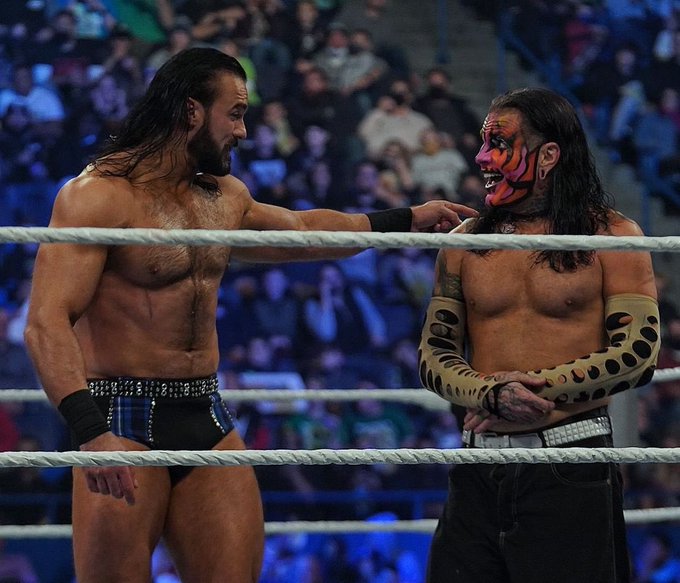 This week, as confirmed on Twitter, WWE SmackDown will witness Drew McIntyre and Jeff Hardy teaming up to take on Happy Corbin and Madcap Moss. Last week, Hardy and Moss faced each other in a singles match.

The Charismatic Enigma called McIntyre to the ringside to watch his back, which helped him win the bout. Following that, they both took turns to hit their finishers on Corbin and his ally, making a strong statement.

Tonight, we will see all four superstars back inside the ring, but they will compete in a tag team match this time. Jeff Hardy and The Scottish Warrior were a part of the WWE SmackDown men’s Survivor Series, and so was Corbin.

It will be interesting to see how the two top babyfaces will perform against two of the most annoying heels in the company.

WWE SmackDown Women’s Champion Charlotte Flair faced her former best and RAW counterpart Becky Lynch in an epic match at Survivor Series. The two superstars delivered the best match of the night that eventually ended with The Queen being defeated. She will now turn her attention towards her next challenger on the blue brand.

We saw Toni Storm challenge Flair to a title match a few weeks ago, but the latter refused. Now that she has lost her match at a recent pay-per-view, Storm will take the opportunity to go for another title shot.

There aren’t many options on WWE SmackDown who can portray a convincing challenger for The Queen. With Sasha Banks being busy in a feud with Shotzi, Toni Storm will likely make for an interesting opponent against Charlotte Flair.

#1 Ridge Holland set to make his debut on WWE SmackDown

..an Irishman & an Englishman walk into a bar.. 1st round is on young Holland here… the kid done good @RidgeWWE #SmackDown 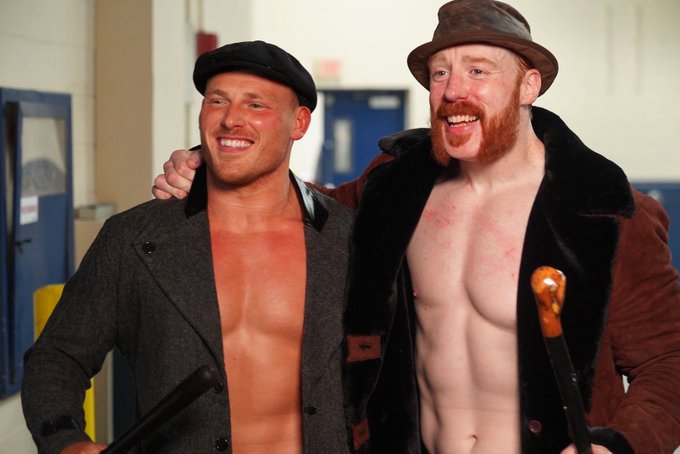 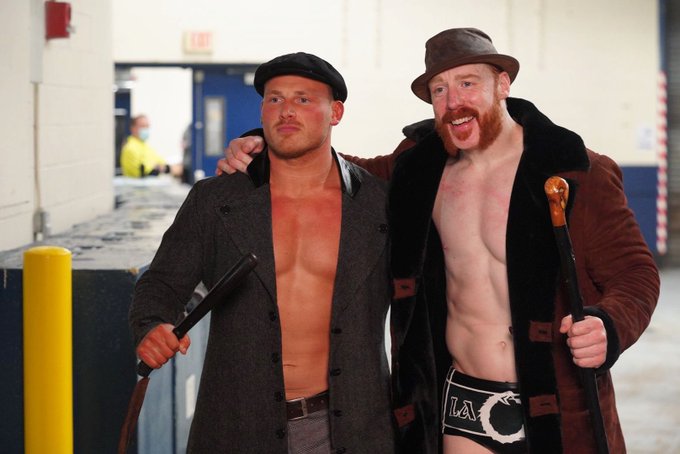 ..an Irishman & an Englishman walk into a bar.. 1st round is on young Holland here… the kid done good @RidgeWWE #SmackDown https://t.co/hHsrIirmv9

Sheamus was the last superstar to join the WWE SmackDown men’s Survivor Series team after defeating top superstars from the blue brand, including Cesaro. However, it is worth mentioning that The Swiss Cyborg was dominant throughout the match and came close to beating him.

He only missed the opportunity due to a distraction caused by Sheamus’ biggest fan, Ridge Holland. He claims that The Celtic Warrior is his idol and hopes to replicate his success in WWE.

Holland is set to make his in-ring debut on the Friday night show this week. He is scheduled to face Cesaro in a singles bout and will likely have Sheamus in his corner.

This is going to be a massive moment for him to make an impression on WWE SmackDown, and he will look to make the most of this opportunity. Moreover, this match could lay the groundwork of a potential feud between Cesaro and Sheamus, especially considering the envious history they shared as part of The Bar.

Tonight’s episode of WWE SmackDown is set to feature several interesting segments and matches. Are you excited to see what the blue brand has to offer this week? Let us know in the comments section below.