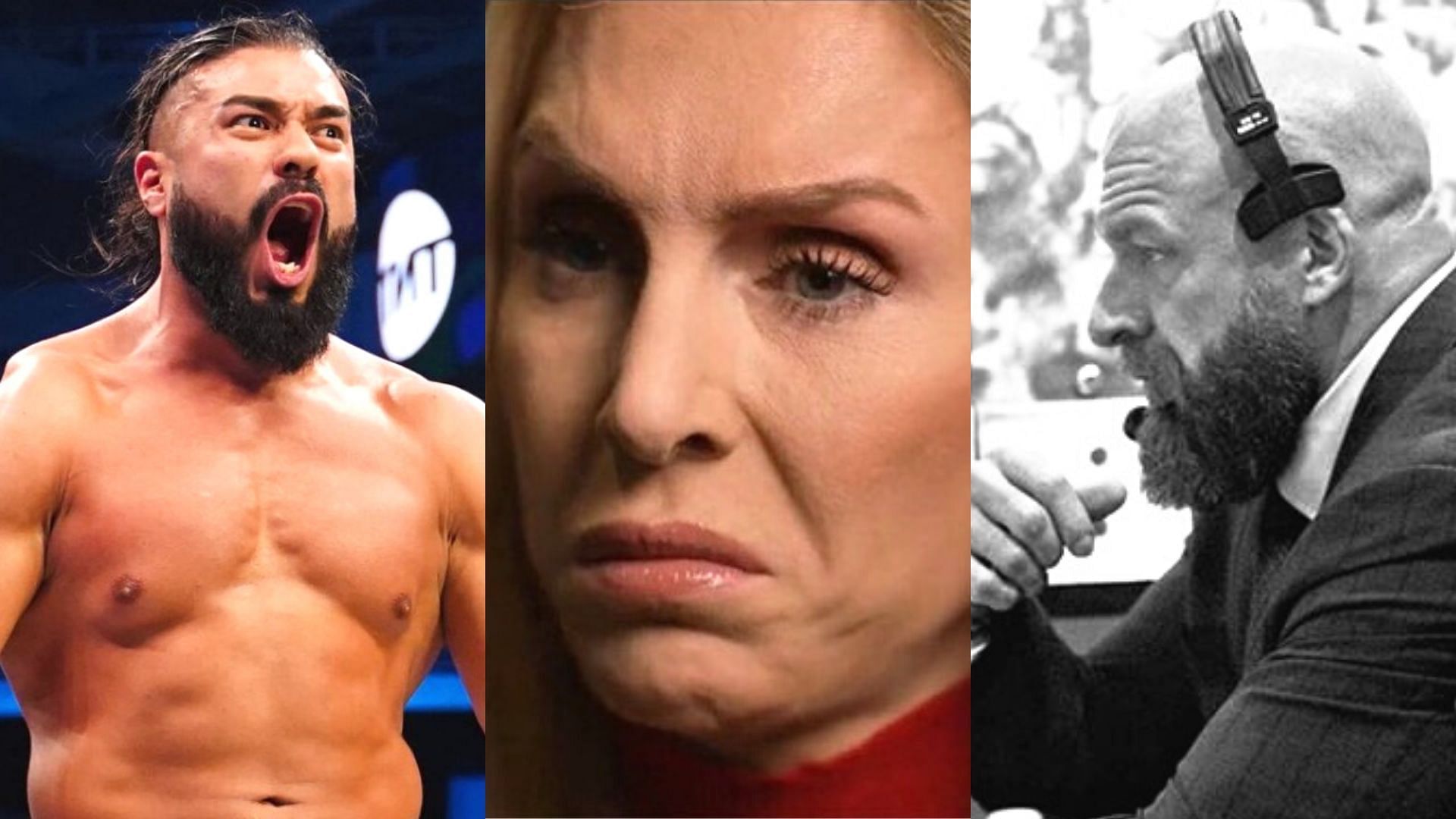 Welcome back to another edition of our daily WWE News & Rumor Roundup, and just like every other day, we have a lot to get into in today’s lineup.

One of the biggest stories going around is an update on Charlotte Flair’s relationship with Andrade.

We also have some backstage news on Elias’ absence and the recently scrapped plans for the WWE Superstar. Brock Lesnar returned on this week’s SmackDown, and details regarding the original plans for the Beast Incarnate’s comeback have now come to light.

A former WWE writer revealed details of his falling out with Triple H and how The Game was against the idea of a current SmackDown star becoming a world champion.

Austin Theory also broke his silence after he got slapped by Vince McMahon on the most recent episode of RAW.

That’s the gist of what to expect in the latest WWE News & Rumor Roundup, which you can view below:

Cassidy Haynes of BodySlam.net confirmed the rumors of Charlotte Flair’s break-up with Andrade and revealed that the WWE Superstar decided to end their relationship.

Reports of the split started doing the rounds a few weeks back when both Flair and Andrade unfollowed each other on social media. The former NXT Champion also deleted recent photos of him and Charlotte, but there was no confirmation of their status as a couple.

New details reveal that Flair and Andrade split up a couple of weeks ago. Here’s an excerpt from the report:

Andrade and Charlotte Flair started dating in 2019 and eventually got engaged in January 2020. The former NXT Champion joined AEW after forcing his way out of WWE earlier this year and has enjoyed a solid run thus far in Tony Khan’s company.

“Hunter brought it up, and everybody else was cool. And nobody had said anything, and I’m sitting in there nervous. And he (Triple H) says, ‘Are we really going to trust the championship with this guy?’ And I knew that was a sniper bullet, man,” Freddie Prinze Jr. revealed. H/t WrestleZone

Freddie Prinze Jr. understood Triple H’s reasoning as any top professional wrestling company needed a stable world champion at the helm. While Jeff Hardy has always been a fan favorite and a phenomenal performer, the Charismatic Enigma has had his fair share of troubles outside the wrestling ring.

Prinze Jr. still believed that pushing Jeff Hardy to be the WWE Champion – albeit for a short reign – was the right call from the creative team.

“Jeff wasn’t trustworthy as champ,” Freddie continued, “It was a feel-good moment but wasn’t a sustainable one. Hunter’s about sustainable championship runs because that’s bankable, reliable money for the company. His philosophy was sound then, and it’s still sound now, and I just know I pushed hard on that one because I thought it was worth it.”

With three World Title reigns under his belt, Jeff Hardy is still gunning for his fourth as he continues to be a popular contributor to the current WWE product.

Should WWE give Jeff Hardy one last run with a world championship?

Brock Lesnar returned on this week’s SmackDown and was at his entertaining best as he secured a future rematch against Roman Reigns.

Dave Meltzer noted in the Newsletter that Brock Lesnar was originally slated to return on the 10th December SmackDown episode in Los Angeles. WWE previously wanted a suspended Brock Lesnar to buy tickets and attend the LA show as part of the crowd, adding a different dynamic to his character and the entire storyline.

However, WWE lifted Brock Lesnar’s suspension and worked out an angle on the most recent show involving Sami Zayn.

“Lesnar returns on 12/3 in San Antonio and is also booked on 12/10 for Smackdown in Los Angeles. Originally he was still going to be suspended and would do the deal where he bought a ticket to attend the Los Angeles show, but on the 11/26 Smackdown the show was built around Braxton ending the show announcing that Lesnar’s suspension was lifted while Pearce acted shocked that Reigns and company also were,” stated Meltzer.

Brock Lesnar is all set to take on Roman Reigns at the Day 1 pay-per-view, and we’d love to know your predictions in the comments at the end of the roundup.

Elias has not been seen on WWE programming for over four months, despite many fans expecting him to return after some character repackaging. However, WrestleVotes now reports that WWE never had any long-term plans following Elias’ graveyard segments, in which he declared that ‘Elias was dead.’

Sources revealed that the former 24/7 Champion’s rebranded gimmick looked oddly similar to Randy Savage, and Vince McMahon wasn’t a big fan of the pitch. Here’s what was reported about Elias’ future:

“Interesting note on Elias, source states they had no end plan for graveyard vignettes. Just shot them to kill off the “music” gimmick. His initial rebranding weeks back looked to similar to Randy Savage w/ colorful trunks & beard so Vince & co didn’t like it. Back to square 1,” WrestleVotes revealed.

Interesting note on Elias, source states they had no end plan for graveyard vignettes. Just shot them to kill off the “music” gimmick. His initial rebranding weeks back looked to similar to Randy Savage w/ colorful trunks & beard so Vince & co didn’t like it. Back to square 1.
11:22 AM · Dec 3, 2021
1382
173

WWE earlier killed Elias’ ‘Drifter’ character to give him a fresh creative direction. However, the talented star is seemingly now stuck in a creative rut, and it would be interesting to see if the WWE Officials choose to utilize him on TV in the time to come.

Austin Theory was awarded the rare opportunity to work an angle with Vince McMahon on RAW, and it all ended with the young star getting slapped by the WWE Chairman.

Austin Theory was a guest on After The Bell with Corey Graves, and the RAW Superstar said he cherished the chance to share the screen with Vince McMahon, who he called a ‘wrestling god.’

“When you think ‘wrestling,’ and you think, like, ‘wrestling god’ — it’s Vince McMahon, you know. I think when I’m sitting there, and I’m talking with him, it’s like, ‘Wow. It doesn’t get bigger than this,'” said Austin Theory.

Austin Theory admitted that he’d rewatched his segment with Vince McMahon on countless occasions since it happened, and he concluded with a cheeky comment about the WWE boss.

“I’ve probably watched the video of [me] getting slapped [by Vince McMahon] like a 100 times. I would just say, just don’t upset Vince McMahon. Because, yo, he’s got some hands, man,” Theory added.

Theory is being groomed for a top spot on RAW as only a handful of superstars are booked to be in storylines with Vince McMahon. Is Austin Theory the next big thing in WWE?

Let us know your thoughts in the comments section. We’ll see you on the next edition of Sportskeeda Wrestling WWE News & Rumor Roundup.