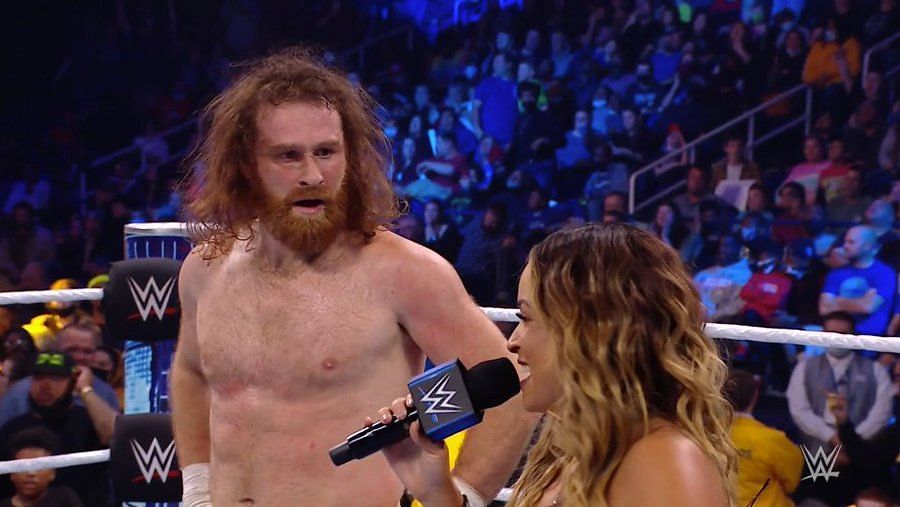 On last night’s episode of WWE Smackdown, Sami Zayn won the Black Friday Invitational Battle Royal. As a result, Zayn now has a Universal Championship Match against Roman Reigns in the future. However, that was overshadowed by the news that Brock Lesnar’s suspension has been lifted and he will be on SmackDown next week.

With Zayn winning, how he won by sneakily eliminating Jeff Hardy, Drew McIntyre’s inclusion from the match and Lesnar’s return. WWE has multiple options they can go in as we head into 2022 and Royal Rumble season.

Let’s start with Sami Zayn. As of this moment, he is currently the #1 contender to Reigns and the Universal Championship. The interesting dynamic here is that both men are heels and WWE typically doesn’t do heel v. heel or babyface v. babyface. So, this will either be that rare occasion that they do or they can make Zayn the babyface for this feud.

With Lesnar returning next week, it is a possibility that Lesnar destroys Zayn and he does not revive the title shot. While this may disappoint fans, this could be used to fuel Zayn’s conspiracy theorist character. He could say how losing his title match is another example of him being held back and a conspiracy against him.

This could be one of the more interesting routes WWE can take.

Next up is Jeff Hardy. Fans were thrilled when it appeared that Hardy had won the Battle Royal, only to be disappointed when Zayn appeared and eliminated him. WWE seems to be giving Hardy a bit of a push after being drafted to Smackdown. He has been picking up wins and was the last member of Team Smackdown to be eliminated from the brand vs. brand Survivor Series match.

Despite him not being used to his full potential, fans are still fully behind Hardy. All you have to do is listen to crowd reactions when “No More Words” starts or when he hits the Twist of Fate and goes for the Swanton Bomb. Hardy is still massively over and a match with Reigns in the future seems inevitable.

While Zayn didn’t do anything wrong, Hardy will likely confront Zayn about how he won the match and he may challenge Zayn for his #1 contendership.

Lastly is Drew McIntyre. McIntyre was inexplicably left out of the Battle Royal last night. There was no given reason as to why he was not included in the match, but WWE can tell a good story out of this.

An example could be that Reigns paid off Adam Pearce and Sonya DeVille to keep McIntyre out of the match because .

Reigns saw Drew take him to the limit at least year’s Survivor Series and knows Drew can beat him. If Reigns isn’t facing Lesnar at WrestleMania, then McIntyre is likely the next best option as Reigns’ opponent at the Showcase of the Immortals.

Who brings a SWORD to a #BattleRoyal?!

Who brings a SWORD to a #BattleRoyal?!

In conclusion, we will have to wait until next week’s Smackdown when Brock Lesnar returns to see what direction WWE goes in.

With Lesnar possibly along with Sami Zayn, Jeff Hardy, and Drew McIntyre, there are a lot of options WWE can go with as we head into 2022 and Day 1 of the PPV.

Who are some Superstars you’d like to see face Roman Reigns for the WWE Universal Championship? Share your thoughts in the comments section below.