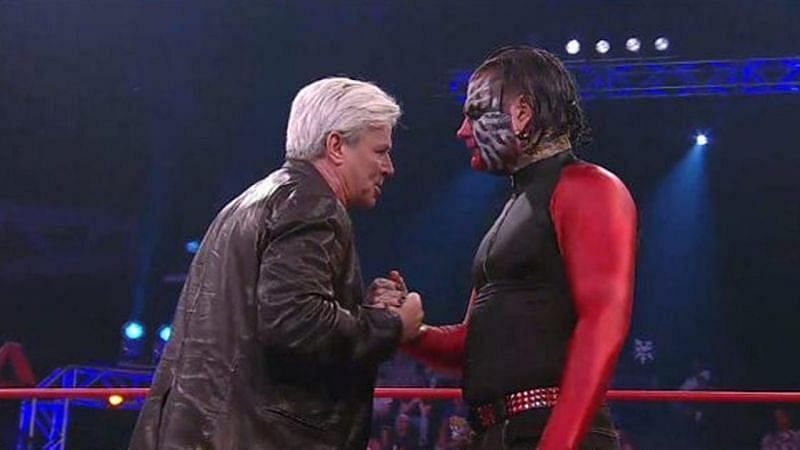 It has been well-documented over the years that Jeff Hardy has fought his demons throughout his career. Thankfully, today, he is performing regularly on the SmackDown brand and receiving the WWE Universe’s love and gratitude whilst doing so.

Whilst it is easy for society to chastise someone who is at rock-bottom, it takes courage and determination for them to get out of that cycle. Jeff’s willingness and perseverance to get healthy and remain healthy, no matter how many times he’s been knocked down, has to be hugely admired.

One of Hardy’s most devastating nights was broadcast to the world at TNA, now IMPACT Wrestling’s, Victory Road pay-per-view in 2011. The Charismatic Enigma fought The Icon Sting in the main event for the TNA World Heavyweight Championship.

So what happened in Jeff Hardy and Sting’s TNA Victory Road match?

Sadly, Jeff Hardy entered the match completely intoxicated, resulting in then-TNA executive Eric Bischoff coming down to the ring. Bischoff called for an audible for both men there and then for the match to finish quickly. After some stalling from Hardy, in just one minute and twenty-eight seconds, Sting pinned Hardy with the Scorpin Death Drop.

You have to give props to #WWE, they aren’t hiding the dark times for Jeff Hardy #WWE24

You have to give props to #WWE, they aren’t hiding the dark times for Jeff Hardy #WWE24 https://t.co/NHsRfIexXH

Of course, you have to wonder why the match even happened in the first place if Jeff Hardy was intoxicated. Eric Bischoff explained a little more about the details behind it:

“First of all, it took forever to find Jeff, so he was really late getting to gorilla, which is probably why I was in the proximity that I was in. When I saw Jeff approaching, I didn’t really notice Jeff being twisted up as much as I noticed the look on the agent’s face. And that’s kinda what brought me in closer to gorilla, just to try to figure out what the f—- is going on. Whoever the agent was essentially said, ‘He’s f—– up. He’s too f—– up to work. And then it became, Okay, who’s calling this?'”

“There was no captain of the ship in gorilla. The match would have been the s—-, and I didn’t want Sting to be in that position. Sting didn’t know. He had no idea that Jeff was gonna show up f—– up. I’m looking for a decision, looking for somebody to come up with an idea. What do we do? Clock’s ticking. We don’t have a lot of time, folks. Can’t call a meeting. Somebody’s gotta call the ball. Who’s gonna call it? Crickets. F— it. I literally walked through the curtain not knowing what I was gonna do.” (h/t WrestleZone)

Did Jeff Hardy get punished for his actions at Victory Road 2011?

#OnThisDay in 2011
TNA VICTORY ROAD
@Sting vs Jeff Hardy
What should’ve been a true classic, unfortunately because of Hardy’s demons, it wasn’t.
#StayStrongJeff 🙏🏼 #ThankYouSting 🦂 https://t.co/tzbJBhICDA

Jeff Hardy was immediately punished for the Victory Road incident. He was sent home and missed the following week’s IMPACT tapings and written out of storylines for the foreseeable future. He ultimately completed 120-days in rehabilitation during his time away from the promotion.

The Charismatic Enigma eventually returned. He has said that the Victory Road incident was one of the best things to happen to him, allowing him to once again follow a path to get himself clean and healthy.