WWE Chairman Vince McMahon was convinced to put the world title on Jeff Hardy after a writer showed him The Charismatic Enigma’s merchandise sales.

Hardy’s three world titles in McMahon’s company came in 2008 and 2009, with his first world title, the WWE Championship, coming in 2008. He won it at the Armageddon pay-per-view, defeating Edge and Triple H in a triple threat match.

Former WWE writer Freddie Prinze Jr. has revealed how he was tasked with giving Jeff Hardy a push by Hall of Famer Michael Hayes. Some on the creative team didn’t think it was a good idea, but Prinze Jr. convinced Vince McMahon by showing him Hardy’s impressive merchandise sales figures.

“The only other ace in the sleeve that I kept that I didn’t use in the pitch because it was good enough to get over with Vince was Jeff’s merchandise sales and those armbands that looked like Spider-Man [webbing] and his t-shirts. At least the week that I presented them with was outselling everyone.

“So I came out of the dark with that, and I said, ‘Listen, this guy’s merchandise is already the top-selling,’ and I showed them the numbers on that. And I said, ‘It’s outselling everyone it’s even outselling you, man,’ I said, ‘We got to take a chance now while we can strike now while everything is ready and perfect or they’re gonna stop believing,’” said Freddie Prinze Jr. (H/T WrestleZone) 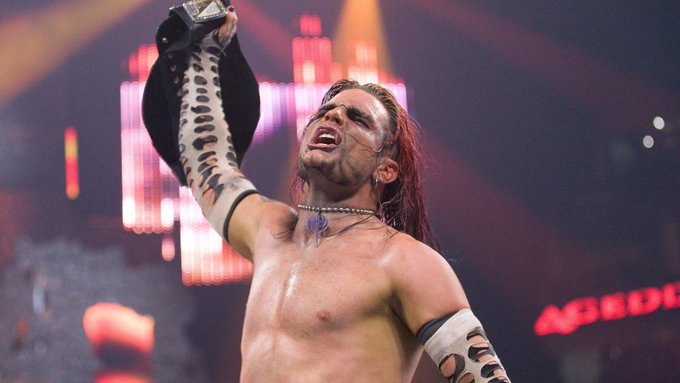 Throwback to Jeff hardy vs cm punk from summerslam 2009

Throwback to Jeff hardy vs cm punk from summerslam 2009 https://t.co/0mJq6n0ZNx

Jeff Hardy will go down in WWE history as one of the best tag team wrestlers of all time. After returning to the company in 2006, Hardy got opportunities to truly showcase his abilities as a singles star.

His win against Edge and Triple H — two names at the top of their game — put him on the map as a singles star and was his crowning glory in WWE.

Hardy had two more world title runs, which included a renewal of his feud with Edge, as well as one with CM Punk, whose star was on the rise in Vince McMahon’s promotion.