The Young Bucks provide a major update on their AEW contract

The Young Bucks have recently revealed that they have signed a two-year contract extension with AEW.

Apart from being signed as in-ring talents, Matt and Nick Jackson are also AEW’s EVPs, playing an integral role in its rise to prominence in the business. The former AEW Tag Team Champions recently shared a cryptic message about their contract status with the company, leaving fans perplexed.

Now, in their recently-updated Twitter bio, The Young Bucks have seemingly cleared the air, stating that they recently agreed to a contract extension for two more years. The duo also revealed that they gave themselves a notable pay hike, which they deserve.

In closing, The Young Bucks added that they are also eyeing to win the AEW Tag Team Championships soon. Check out Matt and Nick Jackson’s message below:

“Contract officially rolled over for two more years. Gave ourselves a nice raise. We deserve it. Maybe we should win the tag titles again too tbh? ImAo,” wrote The Young Bucks. 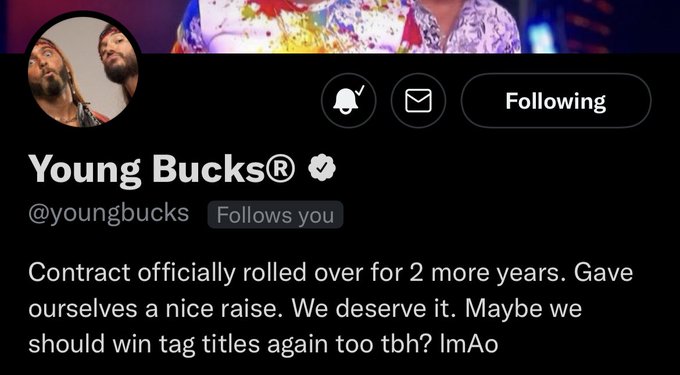 Back at All Out 2021, Lucha Bros had defeated The Young Bucks in a brutal Steel Cage match to win the AEW Tag Team Championships. Fans would love to see the two teams run back their rivalry sometime soon.

On the most recent episode of their smash-hit YouTube-exclusive series, Being The Elite, The Young Bucks disclosed that they are injured and aren’t medically cleared to compete in AEW.

While Matt Jackson is suffering from issues in the neck, Nick Jackson is dealing with a leg injury. However, it’s also worth noting that there’s a chance these injuries might be entirely kayfabe and not real. It now remains to be seen when The Young Bucks step back into the squared circle in AEW.

As it stands, Adam Cole is the only member of The Elite who’s actively competing, with Kenny Omega also recently taking time off to undergo multiple surgeries.

Do you see The Young Bucks regaining their AEW Tag Team Championships in 2022? Sound off in the comments section below.