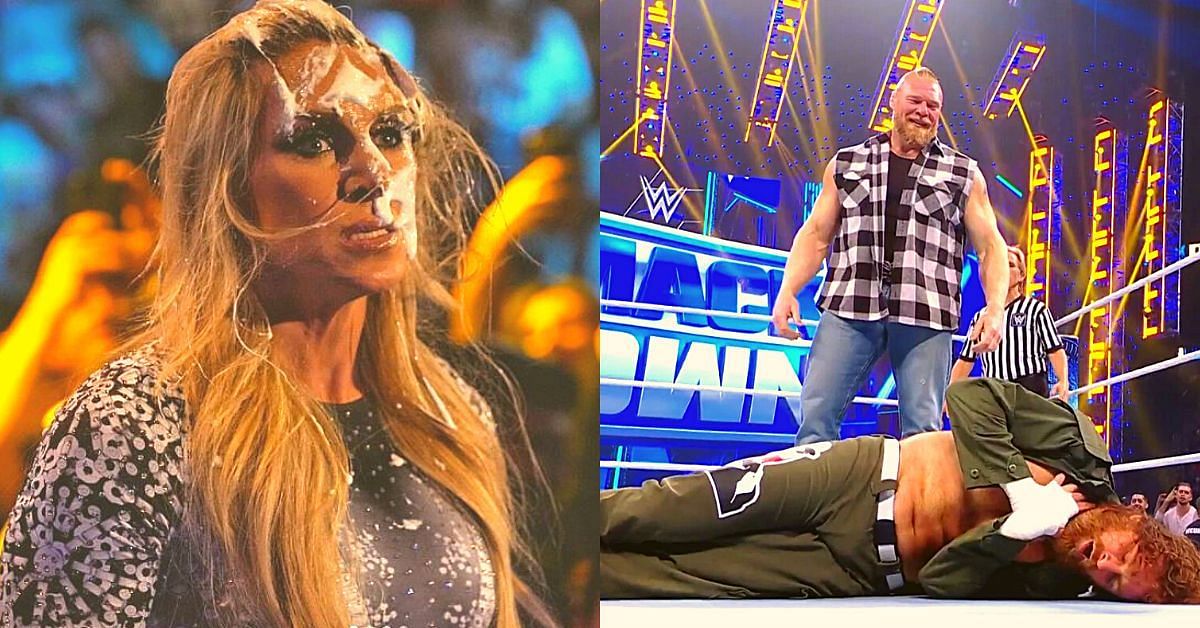 Brock Lesnar kicked off SmackDown and said he had his eyes on the Universal Championship. Sami Zayn interrupted Brock to remind him that he was the No.1 Contender for the Universal Title. 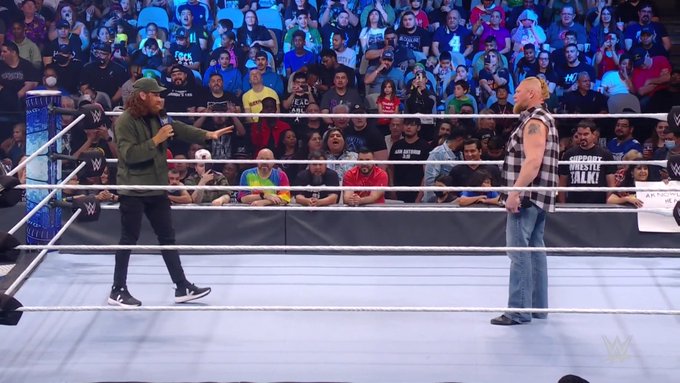 Sami said he would face Roman at WWE Day 1 and would give Brock the first shot at the title if he won.

Lesnar insisted that Zayn should face Roman for the Title tonight and Sami was too scared to say no to the Beast Incarnate.

Backstage after a break on SmackDown, Sami tried to tell Sonya Deville to tell Brock that the Universal Title Match was impossible to book for tonight. But when Lesnar showed up, Sonya went ahead and booked the match for tonight.

Baszler went for an early Khirifuda Clutch but Sasha got out of it. Banks got an arm drag before sending Baszler into the apron outside off a counter. Banks got a Meteora on the outside for a near fall.

After a break on SmackDown, Baszler got a near fall off a knee strike in the corner. Banks slapped Baszler after Shayna taunted her and caught her with a kick before hitting the double stomp in the corner.

Banks was caught in the Khirifuda Clutch but she managed to reverse it into the Banks Statement.

Sasha rolled Baszler up before she could hit her finisher and picked up the win.

Backstage on SmackDown, Adam Pearce told Sonya that he would be gone for the night and left her in charge, possibly due to the return of Brock. Drew was looking for Pearce to ask about why he was not included in the Battle Royale last week and Sonya told him he would have to wait.

Happy Corbin and Madcap Moss were out next on SmackDown for Happy Talk. The duo made fun of Jeff Hardy and Drew McIntyre before Drew made his entrance.

Corbin sent Moss to attack Drew before Hardy surprised him from behind with a Twist of Fate.

Moss ran back inside and took one as well before Drew ran in for a Claymore on Moss before the heels retreated. 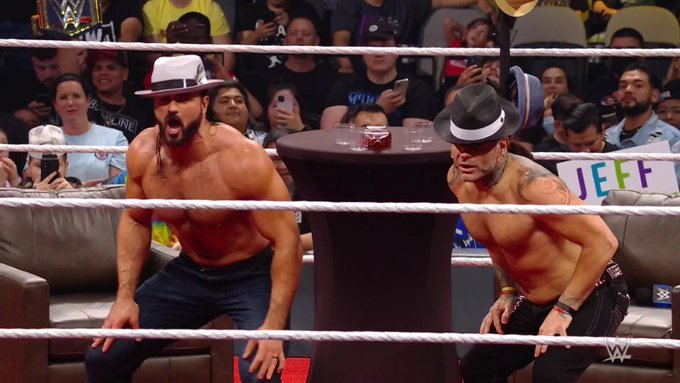 We got another short vignette for Xia Li before SmacKDown continued.

@XiaWWE comes to #SmackDown NEXT FRIDAY.

Erik came right out of the gate and took Angel down in the ring before knocking Humberto off the apron. Erik dropped Ivar on Garza before Humberto came in and took him out and hit a dive on Ivar.

The Lotharios were in control when Boogs was seen playing a guitar solo on the announcer’s desk and Nakamura was jamming out next to him. The distraction ended up costing the Viking Raiders the match as Garza got the roll-up pin.

After the match, the Vikings faced off with Nakamura and Boogs outside the ring before Boogs played their entrance music and diffused the situation.

Backstage on SmackDown, Toni Storm said that she was not afraid of Charlotte while Flair was bothered by her presence. She wanted to face Charlotte for the SmackDown Women’s Championship soon.

The Usos were out and said that Sami would be stupid to challenge Roman Reigns tonight. King Woods came out for his match with The Usos before welcoming Sir Kofi Kingston back on SmackDown.

Woods was hit with a big neckbreaker early in the match and kicked out of a pin attempt from Jey. Uso missed a knee strike in the corner before Woods hit a big boot and a clothesline.

Jimmy Uso got involved as the match went outside and the ref called for the disqualification finish. Kofi came in and hit the Trouble In Paradise before The New Day beat The Usos out of the ring.

After the match, The New Day challenged The Usos to a match at WWE Day 1.

Backstage, Roman asked Heyman if he knew about Brock’s plans ahead of time and Paul said he had no idea. Roman said that he would beat Sami tonight and if Brock interfered, he would take him out as well.

“If Brock comes anywhere near me tonight, I’m gonna smash @BrockLesnar too.”

“If Brock comes anywhere near me tonight, I’m gonna smash @BrockLesnar too.”

Charlotte Flair was out next on SmackDown and said that she knew Toni Storm’s plan and intended to ignore her. She said that last week’s stunt made Toni get noticed and that a match with Flair would boost her career by leaps.

“Even acknowledging Toni feels like I’m giving her too much credit.”

“Even acknowledging Toni feels like I’m giving her too much credit.”

Still, Charlotte refused to give Storm the match before walking out. Storm sneaked up behind Flair as she walked out of the ring and hit her in the face with a pie, getting her revenge for last week. The Queen was left fuming.

Sheamus vs. Cesaro on SmackDown

Cesaro and Sheamus traded uppercuts as the match started and the Celtic Warrior got a backbreaker before hitting the chops on the ropes. Cesaro came back with some fists and sent Sheamus over the ropes and onto the outside.

The Swiss Superman drove Sheamus over the barricades outside with an uppercut before the Irish Superstar got a knee strike in the ring. Cesaro got the double stomp but missed the Neutralizer. Sheamus got the Brogue kick off the counter and picked up the win.

Sami Zayn was out for the Universal Championship match-up next on SmackDown.

Backstage on SmackDown, Naomi challenged Sonya to a singles match. Deville threatened her and then slapped Naomi in the face after accepting the challenge.

Before the match, Sami Zayn said that Texas was his least favorite state in America and he wasn’t happy to have his title shot there before swearing that he will beat Roman tonight and thanked Brock. The Beast Incarnate walked out to watch the match. Sami hinted at Brock to help him in the match before reminding Lesnar of his loss against Roman.

Brock was not happy and hit three German Suplexes and an F5 on Sami. Brock hit a second F5 before setting him up in the corner and walking out.

After a break, Roman walked out and headed for the match and The Usos set Sami back up in the corner. Roman set up for the spear and hit it before getting the win with the Guillotine.

We got the return of Brock Lesnar on SmackDown tonight as well as Kofi Kingston. Sami Zayn walked into a title match with Roman Reigns with little preparation while The New Day challenged The Usos to a title match at WWE Day 1.