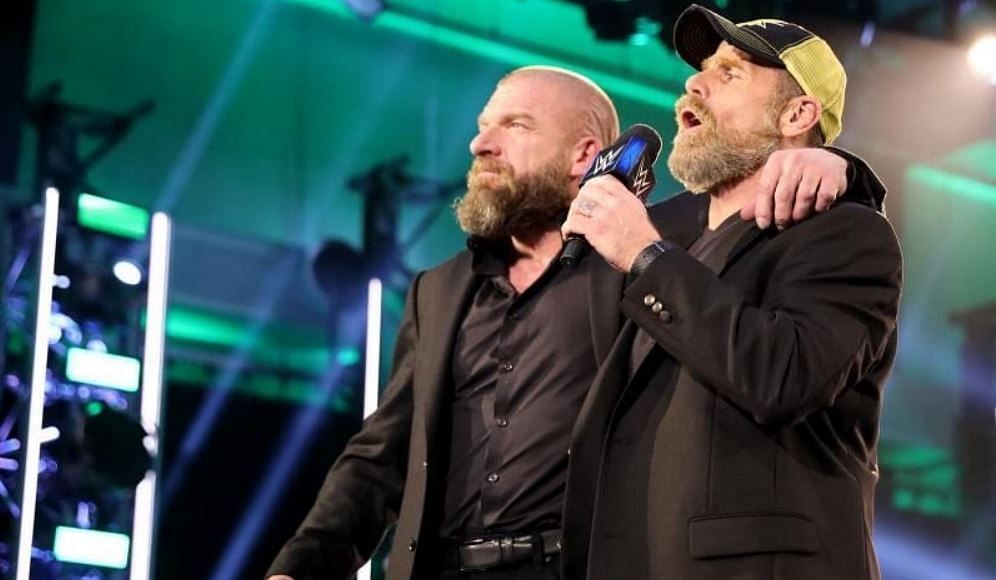 Triple H’s absence has been felt in all corners of WWE throughout the past few months. On September 8, the company announced that the Hall of Famer had a successful medical procedure after he suffered a serious cardiac event. Triple H has been recovering ever since, and Shawn Michaels recently provided an update on his status.

The concerning cardiac episode was caused by a genetic heart issue, but after the procedure, Triple H is expected to make a full recovery. During his absence, Michaels has taken over the reins of NXT as the temporary replacement.

In an interview with Jim Varsallone, The Heartbreak Kid discussed Triple H’s WWE NXT status. Michaels noted that he has told The Game to focus on getting healthy. He also praised the “phenomenal” team that his friend left behind.

“…I’ve told him, ‘I don’t care how good you are, you stay away, get healthy, concentrate on you,'” said Michaels. “The thing is, he put in a fabulous team here, and that’s why it’s able to continue on without him because he put phenomenal people in place….The team he put in place was prepared for these kind of days, and we want him to get healthy.”

As of this writing, it has not been confirmed when Triple H will return, but we wish him well in his ongoing recovery.

Triple H hasn’t made many media appearances during his absence, but he had a few words to say about the launch of the NIL program. WWE announced this initiative earlier this week, and it could revolutionize the company for years to come.

Alongside the official announcement, Triple H explained how the program will help form essential partnerships with a range of top-class athletes. In doing so, it will allow WWE to expand its recruitment of talent in various sports.

“The NIL program has the potential to be transformational to our business,” said Triple H. “By creating partnerships with elite athletes at all levels across a wide variety of college sports, we will dramatically expand our pool of talent and create a system that readies NCAA competitors for WWE once their collegiate careers come to a close.”

WWE has announced the launch of a groundbreaking NIL (Name, Image & Likeness) program that will provide a clear pathway from collegiate athletics to WWE! wwe.com/article/wwe-ni…
7:05 AM · Dec 2, 2021
2799
506

WWE has announced the launch of a groundbreaking NIL (Name, Image & Likeness) program that will provide a clear pathway from collegiate athletics to WWE! wwe.com/article/wwe-ni…

Through this program, Triple H is clearly eager to help young athletes prosper under WWE’s guidance

Are you excited to see the WWE Hall of Famer return? Sound off in the comments below.