The last 24 hours in the Sasha Banks life have been quick, with trademarks filed for new wrestling ideas and now we have moved on the Sasha Banks front as fans continue to wonder when we might see her doing anything even remotely associated with wrestling ever again.

The kind-of, maybe, maybe-not WWE star is reportedly getting ready to make a pretty major appearance in the coming weeks for a legitimate wrestling promotion, and, as it turns out, it won’t be for either WWE or AEW.

PWInsider has today reported that “The Boss” is expected to show up on January 4 at the Tokyo Dome for New Japan Pro-Wrestling’s Wrestle Kingdom 17.

In addition, while it wasn’t confirmed if Banks would appear before fans, it was noted that NJPW was responsible for bringing Banks to the event and that the former WWE Women’s Champion wasn’t just attending on her own accord as a spectator.

With Banks making her presence felt in NJPW, this would be the strongest indication yet that, barring a new working arrangement between WWE and New Japan, Banks is willing to pursue other wrestling options outside of her former company.

On her Instagram stories page today Mercedes Varnado (AKA: Sasha Banks) posted something that has her fans buzzing.

Varnado published a picture, a Stardom graphic, that shows her facing off against KAIRI (AKA: Kairi Sane) for the newly-created IWGP Women’s Championship. 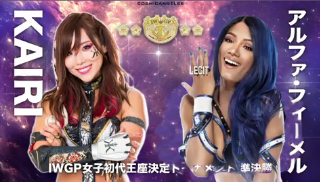 NJPW, the sister company of Stardom, announced the title in July. NJPW’s first-ever women’s championship will be crowned at an NJPW-Stardom joint event, Historic X-Over, on November 20, 2022. The competitors in the tournament are: Mayu Iwatani, Momo Watanabe, Utami Hayashishita, Himeka, Jazzy Gabert, Ava White and KAIRI. Gabert has already beat White in round one and has already moved on to face KAIRI in round two.