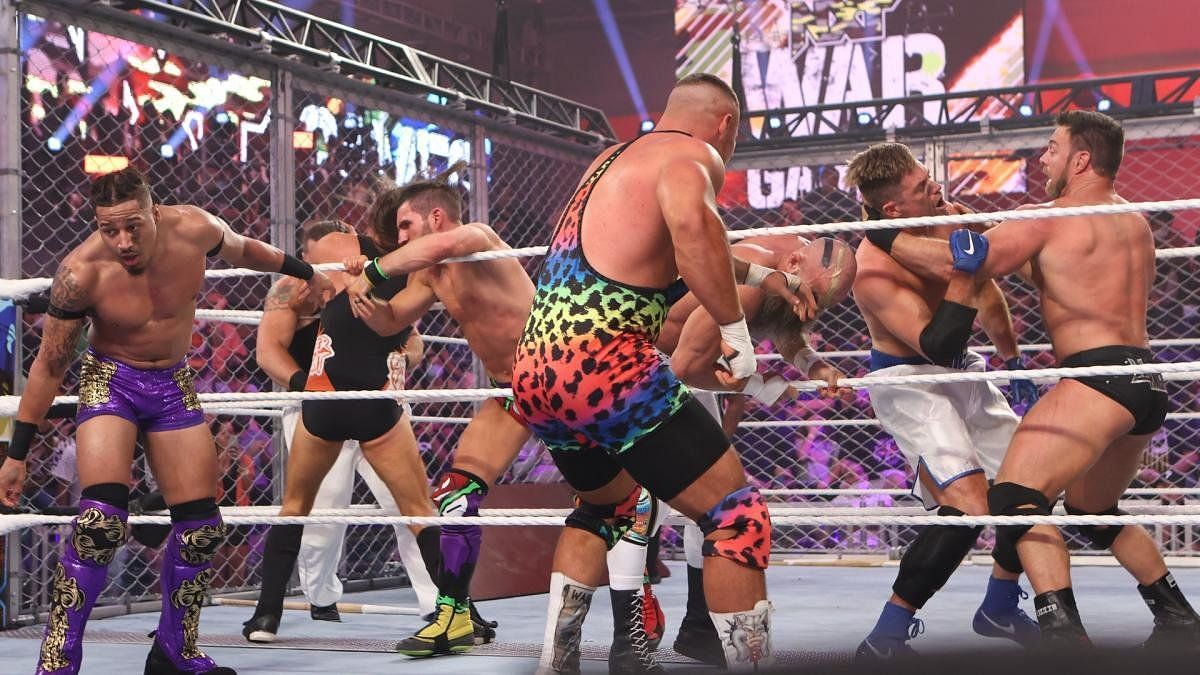 NXT War Games 2021 marked the first major offering from the brand not to be under the “TakeOver” banner. It was also the first major event for NXT since the 2.0 rebrand. The shift has been greeted with polarizing opinions from the fans and critics alike, but the show went a long way towards dictating how everyone views the third brand of WWE.

Although it isn’t a TakeOver, the “War Games” name has plenty of equity behind it with NXT adopting the signature stipulation of WCW since 2017. It has become synonymous with the brand and delivered on the match type that was made famous after being created by Dusty Rhodes.

🚨 The cage is being lowered. 🚨

🚨 The cage is being lowered. 🚨

With the pay-per-view now in the books, it is time to dissect what went down between the ropes and whether the roster delivered with their in-ring action. More than anything, the high workrate matches were what NXT was always known for. In this article, let’s take a look at the star rating for every match at NXT War Games 2021.

NXT War Games 2021 kicked off with the latest installment of the Women’s War Games Match. Over the past two years, the female superstars of the brand have arguably outperformed the men in the titular match type and delivered the most replayed highlights as well. It left lofty expectations for the ladies to meet on the night.

The action started out well with the workhorses of this War Games, Kay Lee Ray and Dakota Kai, but the booking hurt this contest NXT War Games 2021 quite a bit. As soon as Cora Jade entered the bout to give the babyfaces the advantage, the story suffered as a result. Fans immediately got behind the heels and cheered for Toxic Attraction, specifically Gigi Dolin.

All ten women performed admirably and appeared to stand out ahead of the pack. Io Shirai was her usual brilliant self and was a consistent highlight throughout. The Women’s War Games Match was focused heavily on elevating Cora Jade with her suicide swanton bomb off the cage on Jacy Jayne through a table. Her arm injury became the story in the latter half of the bout.

Raquel Gonzalez was at her powerhouse best and proved to be the difference maker, hitting a massive Chingona Bomb on Jayne before Cora Jade scored the deciding fall to give her team the win. This NXT War Games 2021 opener showcased the new stars of their women’s division and put a spotlight on Jade, who could have a bright future.

NXT War Games 2021 rolled on with the NXT Tag Team Championships on the line. Fabian Aichner and Marcel Barthel of Imperium defended the titles against Kyle O’Reilly and Von Wagner. The challengers have developed a friendship through working together in the ring and looking to pick up a big win here, but the champions had other ideas.

The clash proved to be a star-making moment, but not for the 2.0 superstar Wagner. This instead became Aichner’s game-changing performance. He was an absolute star with amazing high flying moves, while his partner Barthel was smooth and crisp with everything he did. Imperium picked up the win after Aichner powered out of a triangle choke into the Imperial Bomb.

You should know by now, @sixftfiiiiive.

Always expect the unexpected with @CGrimesWWE.

You should know by now, @sixftfiiiiive.

Always expect the unexpected with @CGrimesWWE.

The third match on the NXT War Games 2021 card was Cameron Grimes vs. Duke Hudson in a Hair vs. Hair Match. The two men developed hostilities after Grimes beat Hudson in a poker match and the Australian star responded by cutting his hair. The 28-year-old looked for a measure of revenge here by shaving his rival bald.

The Hair vs. Hair Match here at NXT War Games 2021 was underwhelming to start. It didn’t get out of a certain gear and struggled to get the crowd into the action. The two rivals showed poise by getting the fans into things and having a solid bout as Grimes defeated Hudson with a rollup. After the match, Cameron Grimes hit the Cave In and gave Duke Hudson a crewcut.

The second title match of the NXT War Games 2021 event saw Roderick Strong defend the NXT Cruiserweight Championship against Joe Gacy. The Diamond Mine member has reigned form since defeating KUSHIDA for the gold in September, while Gacy has taken exception to the exclusivity of the cruiserweight division and wants to abolish the weight limit completely.

Strong brought his A-game as expected from one of the best workers on the roster here at NXT War Games 2021, but this contest suffered from the characters trying to get in the way of the work. Gacy performed well, but his over-the-top persona overshadowed any potential greatness he could achieve in between the ropes.

There were plenty of distractions on the outside during this NXT War Games 2021 bout as well, with Harland showing up to pick up Ivy Nile. Gacy was distracted by this and led directly to Strong hitting the End of Heartache to retain the Cruiserweight Championship. This could have accomplished more if they let the guys just work out a competitive encounter.

The most anticipated bout of NXT War Games 2021 had to be the Men’s War Games main event. The old school met the new school in a four-on-four battle, which would determine the future of the brand. Team Black and Gold were the stalwarts of the previous era with NXT Champion Tommaso Ciampa, Pete Dunne, LA Knight and Johnny Gargano.

Meanwhile, Team 2.0 includes the best of the newest superstars introduced since the rebrand. Bron Breakker has to be considered the top prospect and a monster who has gotten over huge in a short time. His partners Carmelo Hayes, Grayson Waller and Tony D’Angelo have all made no secret of targeting previous anchors of the brand.

The NXT War Games 2021 main event had a big fight feel right from the entrances, which included Johnny Gargano coming out to his old “Rebel Heart” theme. The energy was palable, with the crowd more invested into this bout than anything else on the evening.

Starting things off with Gargano and Hayes was a great choice. There was even high-octane action in the opening five minutes. Grayson Waller, Pete Dunne and Tony D’Angelo all brought energy upon their entrance. D’Angelo introduced a chain to lock the door, leading to LA Knight hitting a dive off the top of the cage to enter.

Bron Breakker and Tommaso Ciampa came in to get the War Games underway. What followed were high spots and big moments that kept the fans on the edge of their seats for this NXT War Games 2021 main event. Waller hit a flying elbow off the cage on Knight through a table, while Breakker hit a massive spear through a table on Ciampa.

There were awesome callbacks to DIY with Ciampa and Gargano teaming up to give all the fans the feels in what could potentially be Johnny Wrestling’s final NXT match. Breakker proved to be the biggest star of the night when he hit his military press powerslam to pin Ciampa and give Team 2.0 the win to close NXT War Games 2021.