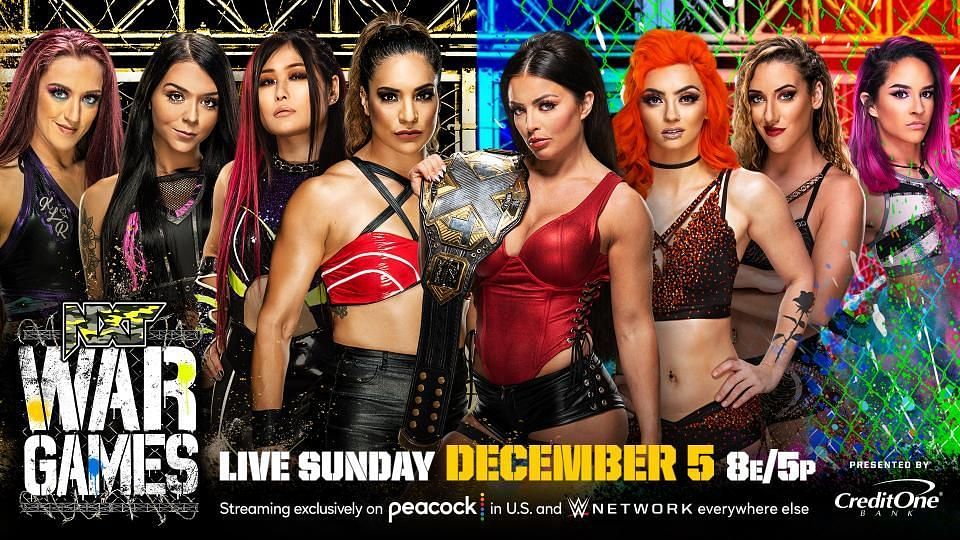 Five big matches are set to take place at this year’s NXT TakeOver: WarGames 2021. The women’s WarGames matches will see Dakota Kai and Raquel Gonzalez settle their rivalry inside a steel cage.

The match between the men’s WarGames team will be electric as NXT Championship hopeful Bron Breakker will be looking to score a victory over Tommaso Ciampa’s team to make his case for another title opportunity.

Imperium will be looking to extend its NXT Tag Team Championship reign when it defends its titles against Kyle O’Reilly and Von Wagner.

Cameron Grimes and Duke Hudson will take their rivalry to the next level in a Hair vs. Hair match.

Lastly, Roderick Strong will defend his NXT Cruiserweight Championship against Joe Gacy in what could turn out to be the match of the night.

NXT has carefully booked some great contests for the final TakeOver event of the year. Check out the preview to this year’s NXT TakeOver: WarGames.

Cameron Grimes has been struggling to get into a good rivalry ever since his storyline with LA Knight for the NXT Million Dollar Championship. He’s had some run-ins with Duke Hudson in recent weeks, and the two men will meet in the ring at NXT TakeOver: WarGames.

Hudson has been impressive in the few matches he’s had on NXT 2.0. Grimes is an NXT veteran, and he will look to assert his authority over the newer superstar.

The two men will fight each other in a Hair vs. Hair match. The match type will give the NXT creative team a chance to do something different on Sunday night.

Grimes could end up losing his signature hair and beard at TakeOver: WarGames after his battle against his larger opponent. Meanwhile, Hudson’s good looks will be at stake as the experienced Grimes can take him down and shave his head.

The battle between the two superstars will be entertaining and give fans something different to look out for. Who will leave TakeOver: WarGames with a full head of hair?

Roderick Strong will put his title on the line against Joe Gacy at NXT TakeOver: WarGames. The NXT Cruiserweight Champion will have a lot at stake when he goes head-to-head against the not-so-cruiserweight superstar.

Strong will have the advantage as he is more experienced. The Diamond Mine will also likely help him during the contest and look to give Strong an unfair advantage.

Gacy will be looking to silence his critics and become even more inclusive. Harland will come out with Gacy to ensure that Diamond Mine avoids getting involved. Will fans crown a new NXT Cruiserweight Champion at TakeOver: WarGames?

Kai has a strong heel team comprising of the three women’s champions on NXT. She will have the advantage walking into WarGames even though she lost the ladder match to Kay Lee Ray on the go-home show of NXT.

Gonzalez has the experienced Shirai by her side along with former NXT UK Women’s Champion KLR and youngster Cora Jade. The mix will help her side put on a great show at WarGames. Her team also has the advantage in Sunday’s match.

Will Gonzalez pick up another victory over The Captain of Team Kick? Or will Kai boot Big Mami Cool out of NXT with a win at TakeOver: WarGames?

Imperium will defend its tag team championships at NXT TakeOver: WarGames 2021. The team recently won back the NXT Tag Team Championships from MSK and will be looking to make their reign memorable.

Meanwhile, the new team of Kyle O’Reilly and Von Wagner has been making headlines all over WWE. KOR is known as a tag team specialist, while Wagner has surprised many fans with his work in the ring.

TakeOver: WarGames will provide KOR and Wagner to win their first titles together on NXT. Meanwhile, Imperium will be looking to pick up a big win to push ahead as the premier tag team for the brand. Who will come out on top on Sunday?

The biggest match of NXT TakeOver: WarGames will see veterans of the brand take on the newcomers. Tommaso Ciampa has been phenomenal as the NXT Champion once again, and he will look to silence the new guys of NXT 2.0.

Meanwhile, Bron Breakker and Carmelo Hayes have already proven themselves to be top superstars on the brand. Their early successes have helped them gain quite a fan following over the months.

The biggest match of TakeOver: WarGames as the future of NXT 2.0 will be decided on Sunday night. Will the newcomers of the brand prove themselves on Sunday? Or will Ciampa and his men show why they are the pillars of NXT?