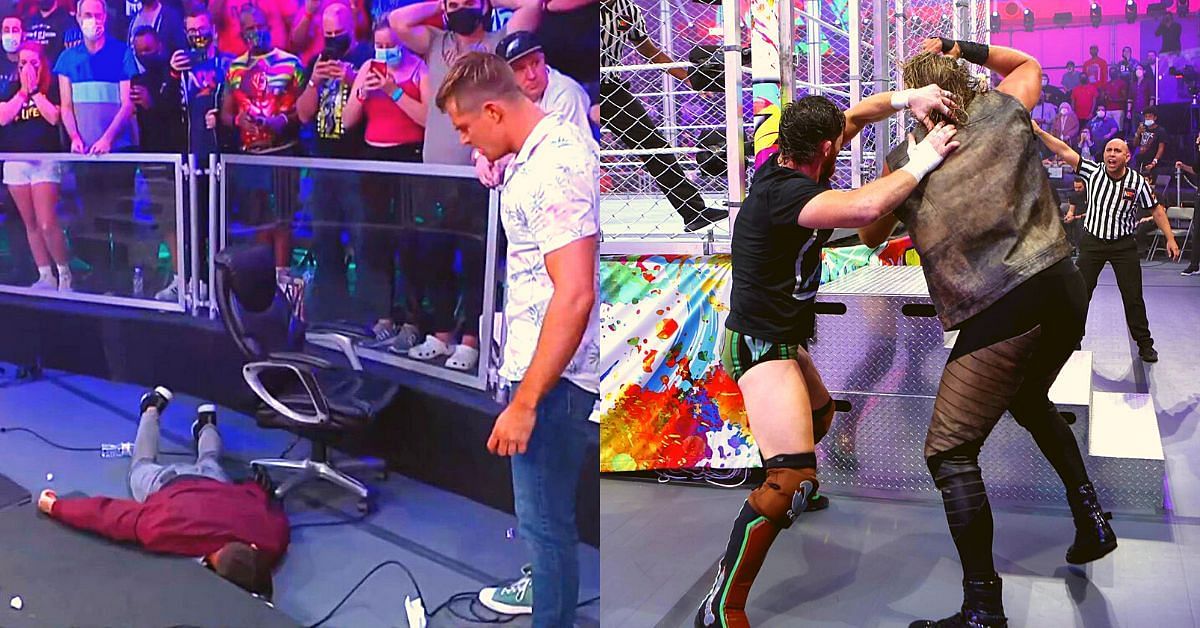 Von Wagner kicked off the NXT 2.0 after WarGames and was headed to the ring for the Steel Cage Match with Kyle O’Reilly.

O’Reilly attacked Wagner during his entrance and dragged him into the cage, locking it shut before the match began.

.@KORcombat is NOT waiting around to get things started!

.@KORcombat is NOT waiting around to get things started!

O’Reilly had the early advantage and Wagner hit a side slam but went back down as KOR unloaded on him. Wagner recovered and tossed Kyle around the ring and into the cage wall.

O’Reilly came back with some big kicks and got a dragon screw on Wagner before getting a near fall off a DDT.

After a break on NXT 2.0, O’Reilly had a guillotine locked in off the ropes, but Wagner countered into a vertical suplex.

O’Reilly got a near fall off a knee strike before Wagner got him with a low blow. Wagner slammed Kyle into the cage wall before getting his finisher for the win.

After the match, Wagner hung O’Reilly upside down on the ropes facing the cage door and slammed it in his face thrice.

Joe Gacy had a short promo and said that Harland was set to make his in-ring debut next week.

Bron Breakker was out next on NXT 2.0 and called out Tommaso Ciampa and challenged him to an NXT championship rematch. Diamond Mine interrupted his promo and congratulated him on the win at WarGames.

“I have nothing but the utmost respect for team black-and-gold.” 🙌

“I have nothing but the utmost respect for team black-and-gold.” 🙌

Bivens said Roderick Strong has wiped out the entire cruiserweight division. Since the weight limit has now been lifted, Strong would like to challenge Breakker.

You want to challenge @bronbreakkerwwe!?

You want to challenge @bronbreakkerwwe!?

Breakker accepted the challenge and walked out as the Creed Brothers headed for their upcoming match.

.@bronbreakkerwwe is ready to take on EVERYBODY!

.@bronbreakkerwwe is ready to take on EVERYBODY!

Briggs & Jensen vs. The Creed Brothers on NXT 2.0

Not only are we setting a whole new standard in this division inside the ring, we also make this division look better than ever 👑 👑
#WWENXT
#EuropeanElegance🇪🇺
#IMPERIUM twitter.com/wwenxt/status/…

#Imperium is keeping a close eye on this one…

#Imperium is keeping a close eye on this one…

Not only are we setting a whole new standard in this division inside the ring, we also make this division look better than ever 👑 👑
#WWENXT
#EuropeanElegance🇪🇺
#IMPERIUM twitter.com/wwenxt/status/…

The match was about to begin on NXT 2.0 and Imperium came out to watch from the balcony. Briggs and Jensen had the early advantage as Brutus Creed was isolated in the ring.

The Creeds got the advantage after Julius tagged in and Brutus managed to send Jensen over the ropes. Julius hit a big suplex on the outside.

The Grizzled Young Veterans were at ringside and stole Jensen’s tag rope, meaning that Briggs couldn’t legally tag in. Briggs took a beating from the Creeds but still managed to roll Brutus up for the win.

Well that’s a new one.

Well that’s a new one.

Duke Hudson was out on NXT 2.0 in a wig and tried to pass it off as his own hair. Hudson said Cameron Grimes was a disappointment and Grimes made his entrance. Cameron reminded us of what really happened at WarGames before Hudson said that he cheated to win the match.

Grimes challenged Hudson to a No Holds barred match and Duke agreed before attacking Grimes. Grimes chased him out of the ring and tried to rip his wig off but failed as Hudson ran backstage.

Backstage on NXT 2.0, The Grizzled Young Veterans got in a fight with Jacket Time after their plan to mess with Briggs & Jensen failed.

In the parking lot, Grayson Waller was trying to impress a lady but she already had a date with LA Knight and they drove off in Knight’s corvette.

Dexter Lumis had the early advantage and sent Hayes into the ring post before ripping off the bandages from his ribs. Lumis went outside to scare Trick as Melo snuck up on him but Dexter was too quick.

Back in the ring, Melo hit a forearm off the ropes for a near fall. Hayes attacked Lumis’ injured arm and tried to rip his gloves off.

After a break on NXT 2.0, Melo was in control of the match and slammed Lumis’ bandaged arm on the mat.

Can @DexterLumis take down the NXT North American Champion???

Can @DexterLumis take down the NXT North American Champion???

Lumis reversed Melo’s finisher and got a big sequence of moves ending with a near fall off an elbow drop.

Trick tried to interfere and landed a punch on Lumis as the referee called for the disqualification. However, Dexter got the Silence in on Williams. 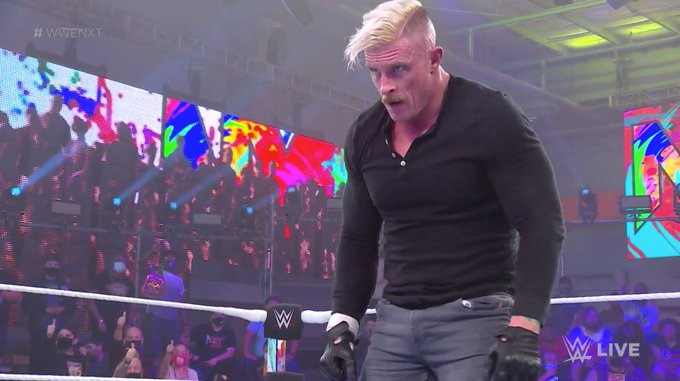 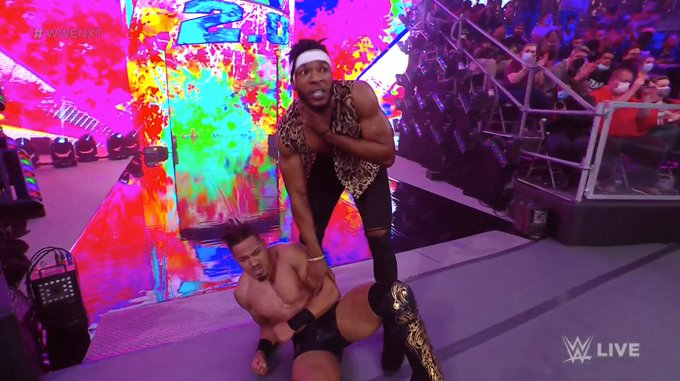 Riddle was revealed as MSK’s Shaman on NXT 2.0

MSK was on NXT 2.0 with the Tag Team Shaman and it was Riddle from RK-Bro on RAW. MSK asked what they needed to do from here on, having accomplished everything they wanted in NXT 2.0.

Riddle said that they would reach the top of the division once more and that he would be there with them.

And the shaman is……

And the shaman is……

Jayne and Feroz kicked off the match and Leon was tagged in early on as Jayne was being isolated. Dolin came in and got the advantage for her team before tagging Jayne back in for a near fall on Leon.

Feroz got a close call on Dolin as the match continued before Jayne tagged back in for a big double-team move.

Jayne knocked Leon off the apron before hitting her finisher on Feroz in the ring for the three-count. 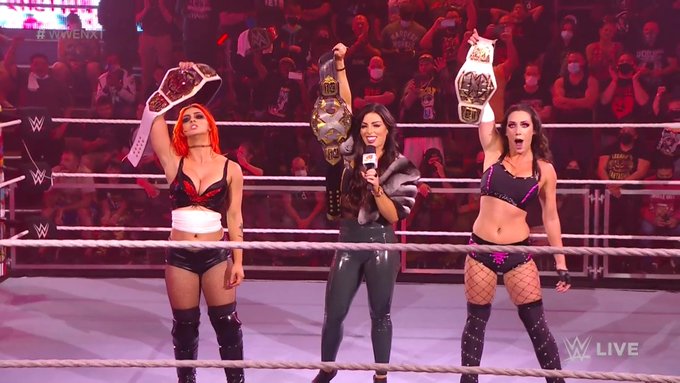 .@CoraJadeWWE is not afraid of #ToxicAttracion, but having some backup always helps.

.@CoraJadeWWE is not afraid of #ToxicAttracion, but having some backup always helps.

Mandy Rose put out an open challenge for the NXT Women’s Title and Cora Jade walked out. Mandy said that ‘she wasn’t the one’ and Raquel Gonzalez came out with a steel chair and drove Toxic Attraction out of the ring.

Tiffany Stratton got another promo before Tony D’Angelo was in a backstage interview on NXT 2.0. Andre Chase came in to give him advice and they ended up scheduling a match next week.

“Next week, why don’t you meet me in the middle of the ring…”

“Next week, why don’t you meet me in the middle of the ring…”

Jade and Gonzalez argued about which one of them should get a title shot and Kay Lee Ray gave Cora her baseball bat to defend herself.

Quinn and Escobar went after each other right off the bell and the former took Santos down with a big tackle before hitting a big slam on the mat. Escobar was taking a beating as Lopez and the LDF watched from ringside.

Escobar managed to come back with a knee strike and sent Quinn outside but his advantage did not last as Xyon sent him into the announcer’s desk.

After a break on NXT 2.0, Quinn got a near fall before Escobar dodged a elbow strike and got a pop-up samoan drop. On the ropes, Escobar dodged a big move and hit a hurricanrana from up top.

Lopez put brass knuckles in Quinn’s hand and Wilde was on the apron to run a distraction. Quinn tossed the knuckles at Wilde and took him out. Escobar took advantage of the distraction and hit a knee strike and finished off his opponent with The Phantom Driver.

Is @elektralopezwwe trying to help @xyonquinnwwe or get him disqualified?

Is @elektralopezwwe trying to help @xyonquinnwwe or get him disqualified?

In the parking lot, Malcolm Bivens and Diamond Mine got into an argument with Trick and Melo about who was the bigger champ on NXT 2.0 – Carmelo Hayes or Roderick Strong.

Gargano was out on NXT 2.0 and the crowd was cheering him on. Gargano said that he was always worried if his performance was good enough for the fans and recalled his WWE tryouts in 2015 where he was rejected.

He thanked William Regal for allowing him to wrestle in a dark match where the crowd chanted his name so much that WWE brought him on to NXT.

He thanked the backstage crew and said that he thought of everyone he worked with as his family.

“I know change is scary, but sometimes it needs to happen.”

“I know change is scary, but sometimes it needs to happen.”

Gargano said he was unsure of his career but would focus on being a dad. Grayson Waller attacked him in the middle of his promo and hit him with a steel chair before sending him into the steel steps with the chair around his neck.

Waller sent Gargano through the announcer’s desk before NXT 2.0 went off the air.

What did we just witness?

What did we just witness?

We got a huge steel cage match to kick off NXT 2.0 and the in-ring return of Dexter Lumis.

Johnny Gargano revealed his plans for the future of his career in WWE while Santos Escobar picked up a big win on Xyonn Quinn in the main event.