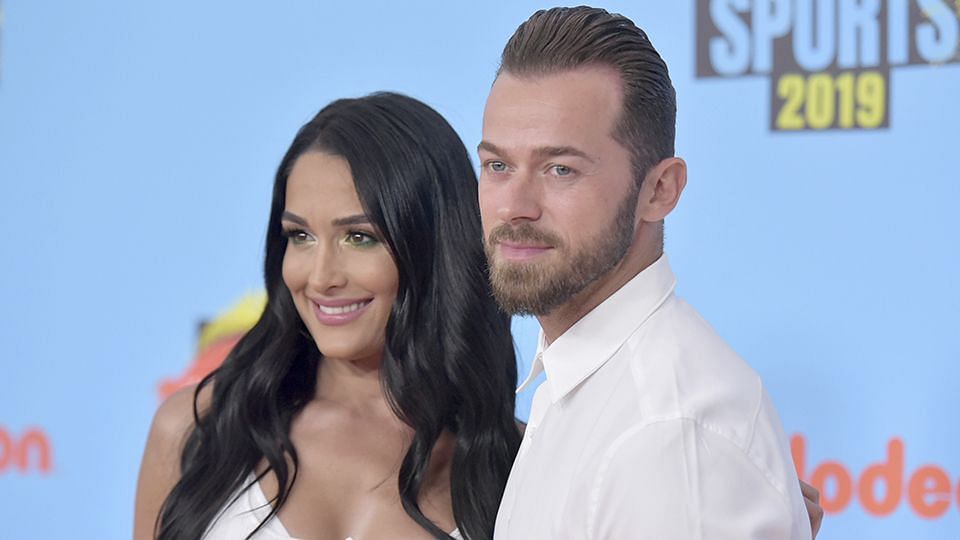 Nikki Bella reveals why she keeps postponing her wedding, discusses the possibility of Baby #2

Former WWE Divas Champion Nikki Bella has been engaged to fiance Artem Chigvintsev since 2019. The couple has since been trying to nail down a date for when she and him would be able to officially tie the knot.

This has not been an easy task for both the former WWE star and professional dancer. Most recently, Nikki Bella announced her wedding would be on Thanksgiving, November 25th 2021; however that did not work out.

In an interview with ET, Nikki Bella revealed that the reason the two keep postponing their wedding is due to Chigvintsev’s family being unable to come to the United States for the ceremony. Her fiance’s parents live in Russia, and due to COVID-19 and pauses on international visas, it’s been difficult for them to make their way to the US. Nikki Bella says this is a promise she made to her fiance, as he wants his parents to be present on their big day.

“The one promise I made him before we can plan, is that his parents can attend, and with where the world’s at right now and trying to get two Russian parents into the country, it’s almost impossible…So, the day I can get two visas, is the day we will set our date and say, ‘I do.'” Said Nikki Bella, (h/t ET)

Later in the interview, Nikki Bella revealed that despite her wedding plans being in limbo, she and fiance Artem may be looking to have another child sometime in the future. Bella gave birth to her first son, Matteo, in July of 2020.

“At the rate I’m going with never getting married, maybe, but this is what I told Artem, ‘At 39, if I’m happy where I’m at in life, and with you and you’re still in my life, I possibly will get pregnant, and let’s try to have that baby before 40, but hey, if not, I’m sorry, she is closed,'” Said Nikki Bella (h/t ET)

The @BellaTwins couldn’t believe they were pregnant at the same time! Check out the Town Hall with The Bellas Podcast on @SiriusXMStars. siriusxm.us/bella-twins
5:20 AM · Nov 27, 2021
50
4

The @BellaTwins couldn’t believe they were pregnant at the same time! Check out the Town Hall with The Bellas Podcast on @SiriusXMStars. siriusxm.us/bella-twins https://t.co/miS7JH7Tyw

Nikki Bella found love once or twice before her engagement to Chigvintsev.

On a 2014 episode of Total Divas, she revealed to her family that when she was 20 years old she married her “highschool sweetheart”; but the wedding was annulled three years later.

Of course, many WWE fans are very familiar with her engagement to WWE icon and 16x World Champion John Cena. The two were involved in a romantic relationship for over 6 years, with the two beginning to date in 2012. At WrestleMania 33, Cena proposed to Bella following their mixed-tag team match with The Miz and his real life wife Maryse. On April 15th, 2018, the two ended their engagement just a month prior to their wedding date.The reason cited for the split was due to the duo’s disagreements about having children.

Nikki Bella began her friendship with now fiance Artem when they were paired together on Dancing With The Stars in 2017.

What do you think of Nikki Bella’s career in WWE? Share your thoughts in the comments section below.