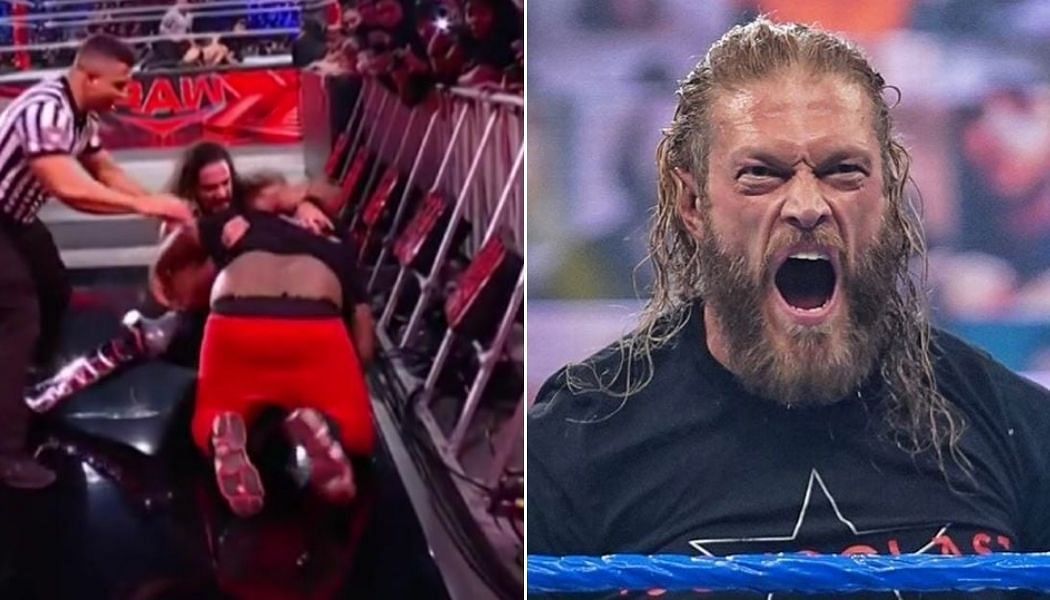 Welcome to another edition of the AEW News Roundup. This week we take a look at comments made by a former WWE tag team champion about Seth Rollins getting attacked by a fan on RAW.

We also look at an injury update about The Young Bucks and Jim Ross’ comments on why Edge didn’t sign with All Elite Wrestling and a whole lot more.

Remember when the wrestlers were tougher than the fans? Ah, the good ol’ days. 🤷🏻‍♂️

Seth Rollins was attacked by a fan on WWE RAW earlier this week. Even though the fan managed to blindside Rollins and tackle him to the ground, The Architect was thankfully not hurt. He immediately put the guy in a Guillotine while referees and security restrained him.

One person who had a terrible take on what happened was Chavo Guerrero. He took to Twitter to say that wrestlers had been much tougher back in his day, which had drawn criticism from both fans and critics.

In a follow-up tweet, Guerrero sort of walked back his comments, apologizing to Seth Rollins for the same.

That got out of hand quickly.Instead of deleting,I will own it & say no disrespect to @WWERollins
I have had many agree&many disagree.Only comes from love of this Biz that has feed my fam for 85 yrs.The fact is,Seth should have never been put in that position in the first place.
3:36 AM · Nov 24, 2021
452
32

That got out of hand quickly.Instead of deleting,I will own it & say no disrespect to @WWERollins
I have had many agree&many disagree.Only comes from love of this Biz that has feed my fam for 85 yrs.The fact is,Seth should have never been put in that position in the first place.

On the latest edition of Grillin’ JR, Ross opened up about Edge’s return to wrestling and why he chose to return to WWE instead of signing with AEW.

There had been interest from Tony Khan’s promotion when The Rated-R Superstar was getting ready to return to the ring. But he ended up coming back to WWE and making his return at the 2020 Royal Rumble.

Jim Ross said that he wasn’t surprised to see Edge choose WWE over AEW because he was comfortable there and had a good relationship with Vince McMahon. JR also added that it was unlikely that Edge would ever wrestle in an AEW ring:

“No, not really. Not really, he’s got a brand established in WWE. It’s home for him, he’s comfortable there, he’s got a really good, open, established communication with Vince which is crucial. Hey look, would I’ve loved to have had him in AEW? Hell yeah, are you kidding? Absolutely but I just think that WWE for him after all these years was his home.”

“When I signed him and Christian, that was their big goal. Their big goal as young wrestlers, young guys training, young guys in the indies throughout Ontario and beyond was to get to WWE. So, I understand his motivation but yeah man. It’s like that same thing about the third question a while ago, you got a chance to get em’, get em’. But he’s just a lifer there. Would I like to see Adam Copeland have a match in AEW someday? Of course I would, most fans would. You and I would, you would too. Is it gonna happen? Unlikely. Highly unlikely,” said Jim Ross.

On the latest edition of Being The Elite, The Young Bucks revealed that they hadn’t been cleared for action last Wednesday on AEW Dynamite.

The Bucks said that they were not cleared to wrestle, which led to Adam Cole teaming up with former stablemate in WWE, Bobby Fish, to take on Jungle Boy and Luchasaurus.

In a recent promo on Dynamite, MJF teased a bidding war between All Elite Wrestling and WWE, when his contract expires in 2024. Tony Khan was asked about this during a recent interview on Busted Open Radio.

Khan said that he had no issues with what MJF said and that he was aware that The Salt of the Earth was going to say it beforehand:

Yes, I knew he was going to say that, he’s been saying it for a long time. I have no problem with it. I signed him to a five year contract two years ago, he has three years left. I’m totally fine (with his comments). There may be a bidding war in 2024, I’m fine with that,” said Tony Khan. (H/T – Fightful)

MJF signed a five-year contract in 2019 and has three more years with Tony Khan’s promotion.

Darby Allin faced MJF at AEW Full Gear but ended up losing after getting clocked in the face with the Dynamite Diamond ring. The Salt of the Earth later cut an intense backstage promo, differing from his usual calm and composed promos. He said that he proved everyone wrong and beat Allin with a headlock takedown like he had promised.

“This was a pretape that was shot after the Darby Allin match. He’s sweating, he’s still in his gear, he’s covered, as he said, in Darby’s shame and not his face paint. I don’t know if this was two minutes or three, I don’t know how long it was, but it was a Roddy Piper promo. It was flawless. The emotion, the venom dripping from the words that he said, about people he doesn’t like and he proved everybody wrong and he beat Darby Allin with a headlock takeover and blah blah blah, what a heel. I’m surprised he didn’t have a brain aneurysm doing this promo but it was great.”

“Your blood’s pumping and the adrenalin is flowing when you’re in a situation like that. You’ve got that advantage but it’s just a different way rather than MJF, like you said, always coming out and being composed and snotty with people by being in control. There he’s in control but triumphant and it was just an extra gear,” said Jim Cornette.

MJF is now set to feud with none other than CM Punk going forward. Punk interrupted him on AEW Dynamite before refusing to shake his hand and walking away.