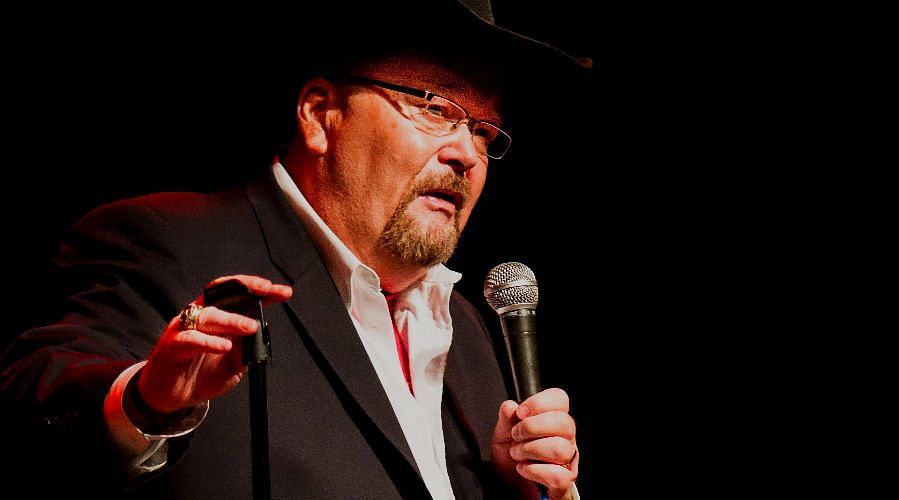 AEW announcer and wrestling legend Jim Ross recently announced he would be off television for a while as he deals with a serious health condition.

The venerable veteran and beloved broadcaster has had quite a journey through the course of his wrestling career. Starting out in Leroy McGuirk’s Tri-State Wrestling territory in the mid-70’s as a referee, he worked for next to nothing just to get his foot in the door. He would also often serve as McGuirk’s driver, as the former wrestler turned promoter had lost his sight from a horrific car accident.

Jim Ross immediately showed signs of a man who could fill any role or task that was asked of him. When Bill Watts took control of the company and renamed it Mid-South Wrestling — later known as the Universal Wrestling Federation — it wasn’t long before JR became his right hand man.

And from there? The rest, as they say, is history.

Ross would join NWA‘s Jim Crockett Promotions in 1987 after the promotion purchased UWF. From there, he would transition to Ted Turner Town, when JCP was purchased by the Atlanta media mogul and became known as WCW in late 1988.

Ross had a steady, if not spectacular, career at World Championship Wrestling, but his eventual signing with the WWF was his springboard to legendary status. He would develop a character to go along with his commentary: Good Ol’ JR, the man under the black hat.

During one of the most pivotal times in the history of pro wrestling, Jim Ross made his biggest calls ever. He was the soundtrack of the sport

Count down to release of my new book THE COMMENTATORS >> another EPIC commentary. The mighty @JRsBBQ with his famous call of @RealMickFoley vs @undertaker Hell in a Cell. I’m thrilled to have Jim Ross as a contributor. Read about this amazing call & more! @amazon @bookdepository
8:08 AM · Aug 1, 2021
6

Count down to release of my new book THE COMMENTATORS >> another EPIC commentary. The mighty @JRsBBQ with his famous call of @RealMickFoley vs @undertaker Hell in a Cell. I’m thrilled to have Jim Ross as a contributor. Read about this amazing call & more! @amazon @bookdepository https://t.co/qFFBsUtl0L

But as all hero stories go? There were some dark times amongst all the bright, shining lights of stardom.

Ross was left twisting in the wind by WCW before finally being let go in 1993. He was later hired and fired on a couple of occasions by the World Wrestling Federation. He was often made to look like a fool or the scapegoat for a lot of things that were often out of his control.

McMahon seemed to take some guilty pleasure in torturing JR, despite his everlasting loyalty to the promotion. There always seemed to be a reason to mock Ross, even though he was the best play-by-play man in wrestling by the late 90’s. Whether it was some sick backstage joke or simply your traditional, locker room towel snapping, it often went way over the line.

The broadcasting icon has persevered through so much personal pain and professional persecution.

He has battled Bell’s Palsy for many years, to the point that the recurring bouts left him with partial paralysis in his face, making it even more difficult for him to do commentary. Once again? This drew some stupid snickers behind his back in WWE.

Then, Ed Ferrara did the unthinkable in creating a character in WCW called ‘Oklahoma’. It was not only a parody of JR, but also made sure to add the tasteless point of ridiculing the way he was now forced to speak.

There was also a time in 2005, when Ross would have to take a leave of absence for colon surgery. Instead of receiving sympathy from WWE, they turned it into an excuse to turn their best announcer into the ‘butt’ of a joke.

It was sickening and juvenile, which is probably why the folks in WWE management at the time seemed so pleased with themselves about it.

On March 22nd, 2017, Jim Ross lost the love of his life. Jan Ross was killed in a brutal road accident after being rear-ended while driving her Vespa. Her injuries were so severe that doctors were unable to save her. It’s something that still haunts the Voice of Wrestling to this day.

With so many roadblocks and such negativity that has been thrown at him, you would think that Jim Ross would have given up by now. That he would be pissed at the world, and rightfully so.

Most men who had suffered such anger, angst, and anguish would have likely withdrawn from society and lived in seclusion. Or even worse… died in seclusion.

But Jim Ross is a fighter. He was raised by a father who taught him to be tough, and later he would thicken his skin even further as part of the pro wrestling world for almost 50 years now.

No matter what life or the business has thrown his way, Ross stayed true to that old wrestling motto: he no-sold it. He took everything like a man, shook it off and trudged forward.

So, if there is anyone that doubts JR will make his comeback as promised? Don’t lay your cards on the table just yet. Because that tough old bird still has a lot of squawking left to do. And just like every other time he’s been knocked down? He will get up again. Because that’s his roots. That’s who he is.

Who knew that good ol’ JR would end up being the toughest cat under a hat?