AEW star Dustin Rhodes recently opened up about Vince McMahon rejecting his idea of a WrestleMania match pitting him against his brother Cody Rhodes.

Going by the name Goldust in WWE, Rhodes had multiple stints with the global juggernaut, the last of which ended in 2019. Since then, the veteran performer has become an integral part of AEW.

What a moment it was when Cody and Goldust captured the WWE Tag Titles from The Shield.

The crowd were HOT for them winning the belts.💪 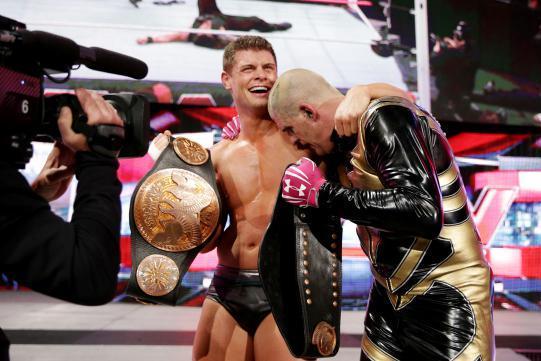 What a moment it was when Cody and Goldust captured the WWE Tag Titles from The Shield.

The crowd were HOT for them winning the belts.💪 https://t.co/f6pxa2fQLD

Recently appearing on the Way of the Blade podcast, Dustin Rhodes looked back on his time in WWE. He recalled his conversations with Vince McMahon about the possibility of booking a WrestleMania match between him and Cody.

The AEW star disclosed that McMahon termed the prospective bout “not good enough” to down at The Grandest Stage of Them All. Rhodes stated it felt “hurtful” what the WWE boss said about the clash. He added that both he and Cody tried to make the match a reality every year but to no avail:

“To go back, like five years before this [Cody Rhodes vs. Dustin Rhodes at Double or Nothing], I had fought so hard every single year to get — to work my brother at WrestleMania…point blank, Vince [McMahon] would always tell me, ‘This match is not good enough to be on WrestleMania.’ That pissed me off. That pissed me off bad, it was hurtful, and it did something to me, it really depleted every ounce of passion that I had man. I fought for it every single year, Cody too. We fought for it every year.” (H/T – PostWrestling)

Dustin Rhodes and Cody Rhodes eventually wrestled at AEW: Double or Nothing 2019

While fans never got to see the two brothers battle it out at WrestleMania, Cody and Dustin eventually locked horns at AEW’s inaugural pay-per-view, Double or Nothing 2019. The match was a bonafide classic, arguably one of the best in AEW’s still-short history.

Though the bout was a blood-soaked epic, Cody and Dustin Rhodes embraced after the finish, putting their differences aside. Later, they went on to compete as a tag team in the main event of Fight For The Fallen 2019 in a losing cause against The Young Bucks.

Cody Rhodes gave an emotional promo after his match with his brother Dustin Rhodes at AEW Double or Nothing 😢 #AEW #AEWDoN https://t.co/Wt9MuZjTFS

Since then, the two have worked alongside on several occasions as part of The Nightmare Family stable. Fans would surely love to see the two enter the AEW Tag Team Championships picture sometime in the future.

Do you think WWE should have booked a WrestleMania match between AEW stars Cody and Dustin Rhodes? Sound off in the comments section below.