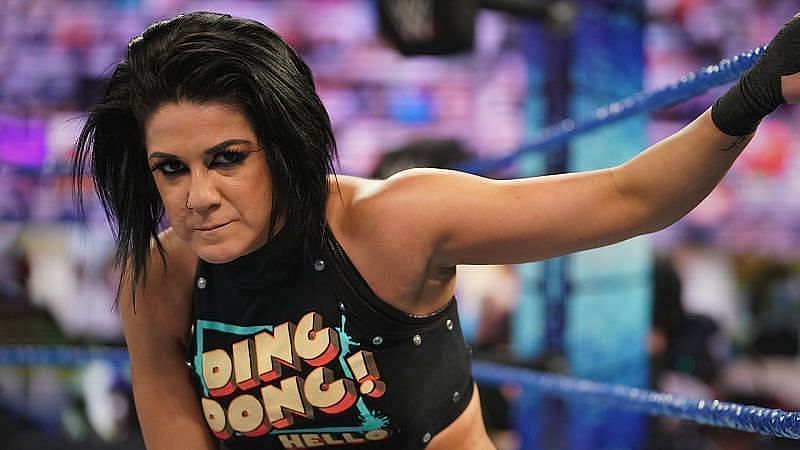 Bayley has offered to help top NXT 2.0 star Zoey Stark. Responding to a tweet from WWE NXT’s official Twitter handle, the WWE Superstar asked Stark if she could help her with her crutches.

The former SmackDown Women’s Champion then sarcastically claimed herself to be a professional in the department.

“Zoey can I help with your crutches I’m a professional” – wrote Bayley.

In early November, it was reported that WWE NXT 2.0 star Zoey Stark had suffered a knee injury. During an earlier episode, a behind-the-scenes segment showed an attack on her by Toxic Attraction members Jacy Jayne and Gigi Dolin. After the attack, Stark was left clenching her left knee.

WWE decided to use the angle to write Stark off television, as she was set to undergo knee surgery. Stark and her tag team partner Io Shirai lost the NXT Women’s Tag Team Championships to Jayne and Dolin in a “Scareway to hell” ladder match.

Despite currently being unable to compete, WWE has decided to keep Zoey Stark on television. On a recent episode of NXT 2.0, the former women’s tag team champion made her way out wearing a leg brace and instead brought out Io Shirai to fight off the likes of Mandy Rose, Dakota Kai, and others.

Bayley herself is currently sidelined due to a knee injury

BREAKING NEWS: @itsBayleyWWE has suffered an injury while training and will be out approximately nine months.

A replacement for her match against @BiancaBelairWWE at #MITB will be announced tonight on #SmackDown.

BREAKING NEWS: @itsBayleyWWE has suffered an injury while training and will be out approximately nine months.

A replacement for her match against @BiancaBelairWWE at #MITB will be announced tonight on #SmackDown.

Bayley is currently sidelined with a torn ACL which she suffered during a training session at the WWE Performance Center in Orlando, Florida. The injury was announced by WWE back in July and it was also confirmed that the Role Model would be out for nine months.

Hence, Bayley’s response to Zoey Stark makes a lot of sense, as the former SmackDown Women’s Champion is likely to be quite used to crutches. As of right now, it remains to be seen when both Bayley and Stark will return to in-ring action.