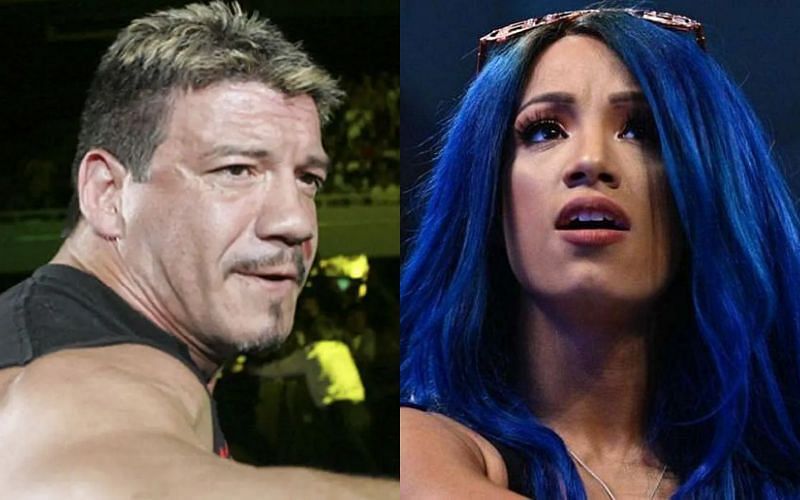 “I was in my mom’s arms just bawling,” WWE superstar Sasha Banks revealed how she learned about Eddie Guerrero’s passing

WWE superstar Sasha Banks recently revealed that she learned about Eddie Guerrero’s sad demise on the day she attended his tribute show.

Eddie is widely regarded as one of the most beloved superstars in pro-wrestling history. His untimely death shocked many fans to the core and the WWE Universe still members him fondly to this day.

“All I wanted to do was show Eddie Guerrero my sign!”

“I saw all these signs saying ‘RIP Eddie’ and I was so confused, a fan came up to me and said he had passed. Everything inside me broke…”

@SashaBanksWWE remembers the moment she found about his passing 💔

“All I wanted to do was show Eddie Guerrero my sign!”

“I saw all these signs saying ‘RIP Eddie’ and I was so confused, a fan came up to me and said he had passed. Everything inside me broke…”

@SashaBanksWWE remembers the moment she found about his passing 💔

Banks grew up idolizing Eddie Guerrero and was excited to show him the signs she made for the show. Unfortunately, he passed away that night, and Banks did not know about the news until she got to the venue. Banks recalled her experience in a recent interview and stated:

“Yes, it’s kind of crazy how the universe works and how that happened to be in Minneapolis, where I lived at the time. I was so excited to go to that show. All I wanted to do was to show Eddie Guerrero my sign. All I was thinking was, ‘Oh my God, I hope Eddie sees my sign.’ I won second-row tickets that night from doing this autograph signing with Ashley Massaro. And I remember going into the arena and I just saw all these signs that said ‘RIP Eddie Guerrero’. And I was so confused. I was like, ‘Well, maybe Minneapolis doesn’t like Eddie.’ Because it was advertised Eddie Guerrero vs. The Undertaker — which I just assumed everybody loved the Undertaker — versus Batista.”

“And a fan came up to me and told me Eddie Guerrero passed away that night and everything inside of me just broke. I couldn’t believe that my hero passed away. I was crying like a little baby, I was in my mom’s arms just bawling. I just couldn’t believe it, but I thought, ‘Wow, I’m going to have to watch it. I’m here for Eddie'” she concluded. (h/t WrestlingInc)

Sasha Banks never forgot her hero and pays him tribute in each of her WWE matches today.

Sasha Banks was the captain of the Smackdown women’s team at Survivor Series. However, she was betrayed by her teammates, especially Shotzi, who caused her disqualification via countout.

This would act as fuel for the ongoing feud between Sasha Banks and Shotzi on Smackdown. The Boss could also bring up the fact that the blue brand lost in the battle for brand supremacy after losing their captain.

It will be interesting to see what’s in store for Sasha Banks on WWE Smackdown this week.

Where were you when you found out about Eddie Guerrero’s death? What was your reaction at the time? Share your thoughts and memories in the comments section below.