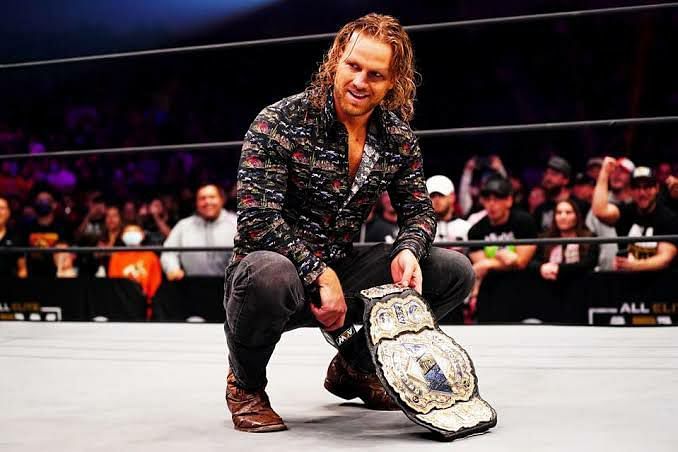 Bryan Danielson might be disappointed that he won’t be facing Kenny Omega for the AEW World Championship, but that didn’t stop the five-time WWE world champion from praising Hangman Page.

The Millennial Cowboy’s story has been one of the longest-running and most gripping storylines in All Elite Wrestling. It concluded at Full Gear when he finally defeated Omega to capture the top prize in the company.

Behind the Scenes: The Making of Hangman’s Full Gear Entrance segment.

Behind the Scenes: The Making of Hangman’s Full Gear Entrance segment.

Speaking on The Wrestling Classic, Bryan Danielson was asked about his opinion on the current champion. The American Dragon said the following:

“So, uh, I think Hangman Page is awesome. I think that when people connect like that with a crowd, it becomes magic, like that’s what you want. He’s not somebody who had, you know Kenny Omega had a name coming in. The previous champions, you know what I mean, you look at Jericho, you look at Moxley and Kenny. You know, Kenny wasn’t in WWE and he had made a huge name for himself in Japan and all that stuff. Hangman didn’t have that big of a name.”

“I look at him as an AEW homegrown star. It’s cool when I’m on a show so when he came out and won ladder match, the loudest reaction of that day was Hangman Page. To me that’s super cool. For me, that speaks volumes of him as far as how he’s been able to progress. It speaks volumes of AEW where they trust somebody to do that. In AEW being the world champion is a big thing,” said Bryan Danielson.

Over the last two weeks, Danielson has displayed the heel side of his character. He has been taking on members of The Dark Order and beating them convincingly, to send a message to Page.

The American Dragon literally knocked Colt Cabana’s tooth out this week on AEW Dynamite while he beat Evil Uno quite decisively last week. In the coming week, he’ll take on Alan Angels on the Wednesday night show.