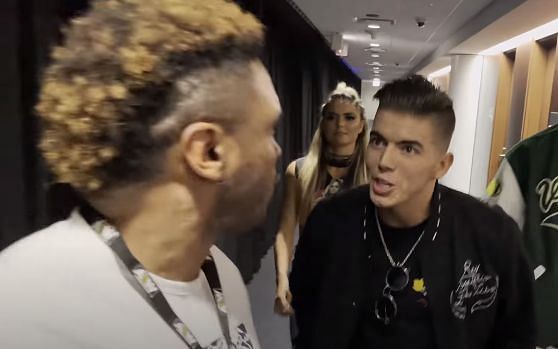 AEW Dynamite aired from Chicago this week, and in the 349th episode of his vlog, Sammy Guevara, Tay Conti and Griff Garrison were being led backstage by Shawn Dean. The Captain promised the trio that he had a surprise for them, which turned out to be Chicago native Armando Estrada himself.

Estrada managed Umaga in 2006 and 2007 as a Cuban businessman. The Samoan Bulldozer defeated Ric Flair as the duo made a successful start to their run in WWE. Estrada was mainly responsible for the mic work while Umaga carried out the business in the ring. Umaga defeated Kane and eventually won the Intercontinental Championship.

AEW has highlighted former ECW, WWE and WCW stars in guest appearances as the likes of Bret Hart, Konnan, Tully Blanchard, Sting and Arn Anderson have featured on AEW programming in various capacities. Estrada’s last professional wrestling foray was with All-American Wrestling when he managed Jacob Fatu, Umaga’s nephew. Can we see him in AEW again?

Sammy Guevara’s next challenger for the TNT Championship will be Tony Nese on the upcoming episode of AEW Rampage. The match was made official on the previous episode when the Premier Athlete challenged the Spanish God. However, Tony Nese proceeded to attack the Inner Circle member and hurt his injured ribs even more.

Tony Nese has only featured on AEW Dark so far. Even though he was restricted to the Cruiserweight Division in WWE, there was ample evidence of him being an excellent worker inside the ropes. Sammy Guevara is one of the bright young stars of AEW and their styles should mesh well. Expect an excellent contest between the two on Friday night.

In another match for Rampage, AEW tag team champions Lucha Brothers will take on the FTR in a two-out-of-three falls match for the tag team titles. The show promises to be quite an exciting hour of professional wrestling!