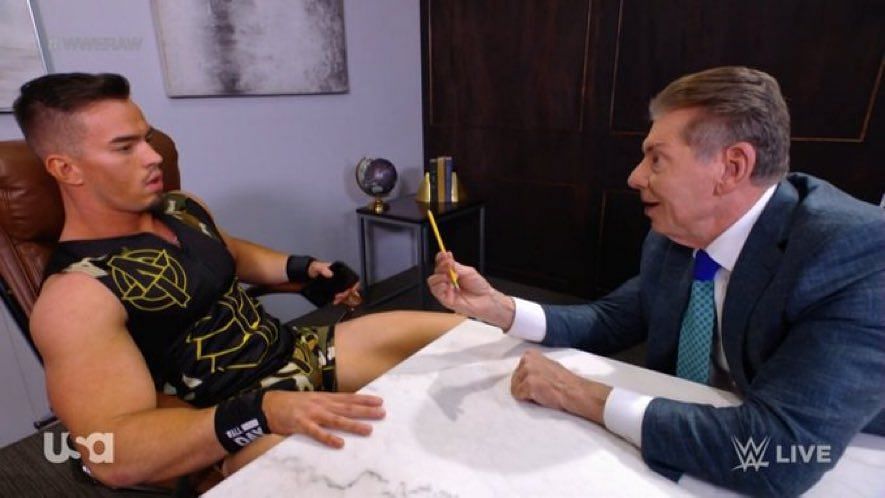 WWE RAW star Austin Theory would be the perfect candidate to retire Goldberg, as per Vince Russo. He thinks the youngster could get “over” with the fans if he defeats the former Universal Champion.

Theory has been getting a push on the red brand over the last few weeks, featuring in segments with Vince McMahon while also feuding with fan-favorite Finn Balor. In the storyline, he has been tasked with impressing the WWE Chairman.

While DDP thinks Reigns should be the man to face the Hall of Famer, Russo believes that a young star like Austin Theory should get the rub from Goldberg.

“People have beaten Goldberg, so Reigns beating Goldberg on his way out, I don’t think it means anything. In my opinion, I think it should be somebody that WWE really wants to build and get over. I’m just going to throw this out there – and, again, I don’t know how serious they are – if they really want to get Austin Theory over or somebody like that, that’s going to mean something,” said Russo.

Goldberg has a two-match per-year contract which is set to expire in 2023. But with the Hall of Famer wrestling thrice this year – twice against Bobby Lashley and once against Drew McIntyre – he has just one match remaining on his current deal.

Goldberg hasn’t closed the door to an extension of his current WWE contract and feels that he can still wrestle and entertain fans. He has had five matches in the last two years, four of which have been for the world title.

Do you think Goldberg should face Austin Theory in his final match? Let us know in the comments below.

Please H/T Sportskeeda if you use any of the above quotes.