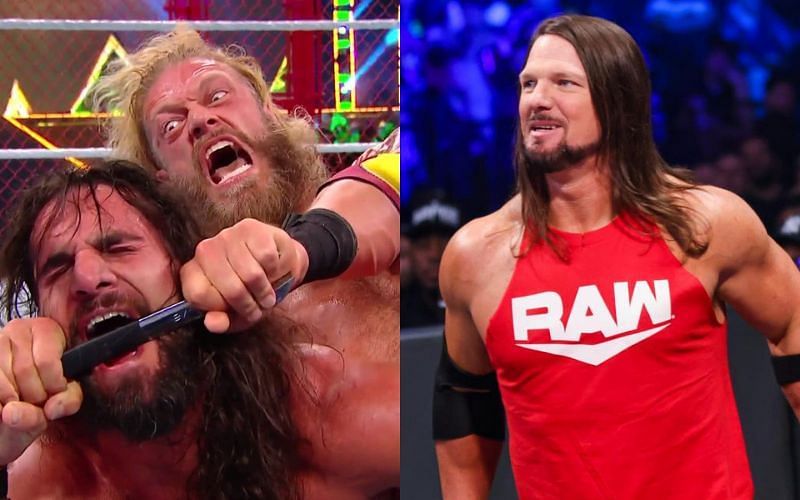 WWE Superstar Edge is set to return on RAW this week. The Hall of Famer confirmed the news on Twitter and asked for suggestions regarding his next target.

Edge made his last appearance at WWE Crown Jewel, where he faced Seth Rollins in an unforgettable Hell in a Cell match last month. The third and final in-ring bout of their intense rivalry ended with the Rated-R superstar picking up victory. The rivalry between the two superstars was highly personal in nature, and they left no stone unturned in delivering one of the best storylines this year.

On my way to #RAW Gonna do a poll. Brand new landscape, so who do I challenge next? My pollsters, who I’m paying with Snickers and dragons blood, will make sure to get me the results. And begin!

Edge was drafted into WWE RAW the same month, and he is now looking for a new challenge on the red brand. He asked WWE fans to share their opinions on his next potential feud. Several fans named multiple superstars, but one name was often seen in the suggestion, AJ Styles. The Phenomenal One is currently working alongside Omos, and many believe he should be involved in a more compelling storyline on WWE RAW.

@EdgeRatedR There’s a built-in story here. He suffered an injured shoulder immediately off your comeback when you hit him with the spear in the 2020 Royal Rumble match. Stems from there and build it up into something… phenomenal. Plus it’ll save his talents from tag team purgatory w/ Omos.
2:29 AM · Nov 29, 2021
56
1

@EdgeRatedR There’s a built-in story here. He suffered an injured shoulder immediately off your comeback when you hit him with the spear in the 2020 Royal Rumble match. Stems from there and build it up into something… phenomenal. Plus it’ll save his talents from tag team purgatory w/ Omos. https://t.co/rYR8IXaoKW

Other potential options for Edge’s next feud include Kevin Owens and Finn Balor, as suggested by WWE fans in replies to his post. Not to forget, Edge wanted one more run with the title and can always go after Big E’s WWE Championship. He can also choose to help his old friend Rey Mysterio by avenging his recent misery at the hands of Bobby Lashley.

Edge is excited to face new challenges in RAW’s changing landscape. Still, he has a strong enough reason to jeopardize Seth Rollins’ guaranteed shot at the WWE Championship. Edge has multiple options to explore following his return, and it would be interesting to see which one would prove to be most appealing for the Rated-R superstar.

Edge fought against all odds to win a shot at Roman Reigns’ Universal Championship. However, his chances at winning the title were compromised by Seth Rollins, who interfered in their match and stopped the WWE Hall of Famer from winning gold at Money in the Bank pay-per-view.

This led to an extended feud between Rollins and Edge, as both superstars engaged in a taxing rivalry. The Rated-R superstar mocked his opponent by labeling him “Edge Lite,” while Rollins made a massive statement by invading the legend’s home.

The writers did well in drawing a parallel between their respective WWE careers. Both Rollins and Edge had one victory under their belts before their final meeting at Crown Jewel.

As mentioned earlier, Edge and Rollins unleashed the most brutal sides of their personality during their Hell in a Cell match at the pay-per-view. The in-ring narrative was fantastic, as was the action that unfolded inside the squared circle. Following an unforgettable encounter, Edge emerged victoriously and celebrated with fans before taking a month-long hiatus from WWE.

Would you like to see Edge vs AJ Styles on WWE RAW? Let us know in the comments section below.