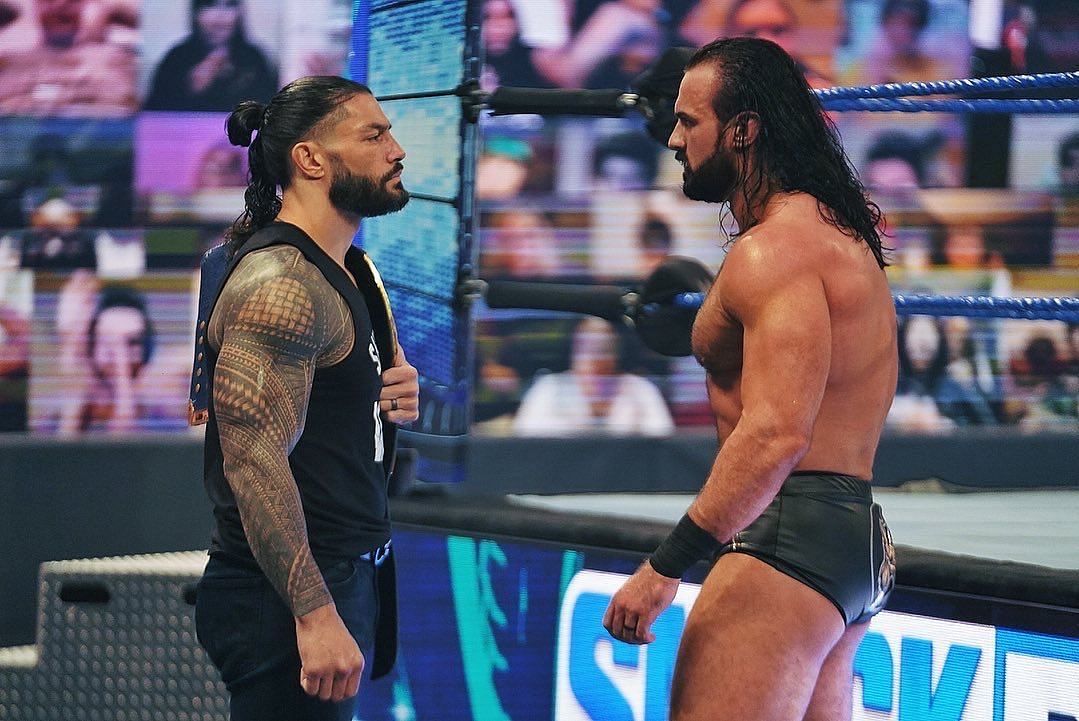 Any WWE fan would agree that Roman Reigns and Drew McIntyre are two of the global franchise’s most invaluable assets. These two stalwarts have led the company through the unprecedented times of the ongoing pandemic and have become mainstays on the main-event scene.

The Tribal Chief, Roman Reigns, is the reigning Universal Champion. Reigns has run roughshod over the entire roster, owning victories over John Cena, Edge, Finn Balor, Kevin Owens, and Cesaro. On the other hand, The Scottish Terminator recently jumped ship to the champion’s turf — SmackDown. McIntyre has distanced himself from the world championship picture but has silently gained momentum to move up the ranks.

If the two-time WWE Champion were to step up to The Head of the Table, Reigns’ days as Universal Champion might be numbered.

Drew McIntyre is the perfect hero to topple the spiteful champion

While Roman Reigns has garnered nuclear heat from the WWE Universe, The Scottish Warrior has fought honorably and bravely, which has endeared him to the wrestling community.

The story writes itself: The honorable and defiant titan rises to topple the malicious champion that has tormented the entire WWE roster relentlessly for so long. McIntyre is tailor-made for the titan’s role in this scenario as he possesses all the attributes, from strength to charisma, to conquer Reigns, the mega-villain.

Drew McIntyre has a score to settle with Roman Reigns

As some fans may recall, Drew McIntyre and Roman Reigns collided in a ferocious champion vs. champion singles match at Survivor Series 2020. It was a strong match-of-the-year candidate, and Reigns won the battle due to Jey Uso‘s outside interference.

McIntyre, then-WWE Champion, could have ended The Tribal Chief’s reign of terror in November 2020. But shenanigans and a well-timed low-blow, followed by the guillotine choke, put an end to those fortunes. It must irk The Scottish Terminator as few have gotten so close to defeating Reigns in the past 15 months.

JEY @WWEUsos IS HERE FOR THE ASSIST!

JEY @WWEUsos IS HERE FOR THE ASSIST!

However, this gives Drew McIntyre an incentive to hunt down Reigns as they have unfinished business. Hence, from a storyline perspective, a program between the two titans makes total sense. Adding the Universal Championship to this heated rivalry spices things up and makes a potential storyline more riveting.

Regardless of the outcome, Drew McIntyre vs. Roman Reigns is a blockbuster dream match that could close out WrestleMania. The latter will have to drop the Universal Championship someday, and McIntyre certainly seems like a viable candidate to topple The Tribal Chief.