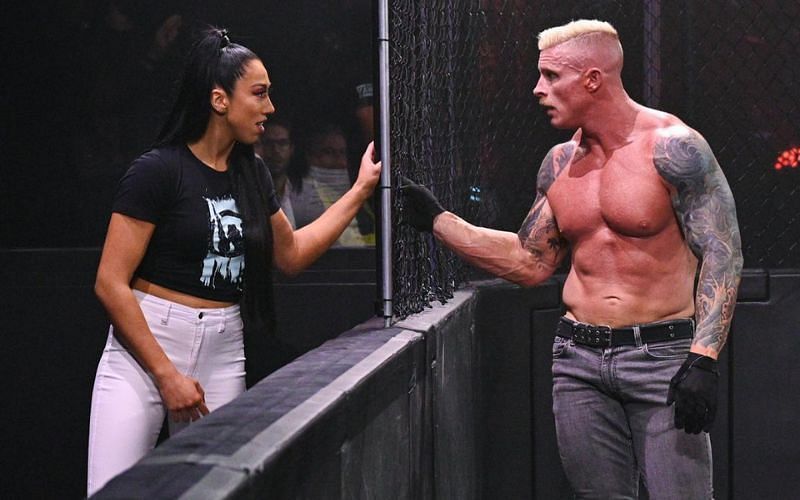 WWE NXT 2.0 Superstar Dexter Lumis has been ruled out of action for over a month in the aftermath of a recent brutal attack.

Earlier this month, North American Champion Carmelo Hayes and Trick Williams teamed up to launch a vicious attack on Lumis. They used steel chairs to brutalize the latter and left him with a fractured arm. Additionally, he suffered from a few broken metacarpals in the attack.

Dexter Lumis’ on-screen wife, Indi Hartwell, revealed the details mentioned above on NXT this week. She noted that taking Lumis can no longer draw comfortably, which is the most hurtful part for her.

Sexy Dexy is such an amazing artist 👨‍🎨 https://t.co/LmNgpuSUyd

As of this writing, it hasn’t been confirmed if Dexter Lumis sustained a legitimate injury. However, Hartwell did say that he wouldn’t be returning for more than a month.

The WWE creative team is using his absence to help Indi Hartwell’s current run on NXT 2.0. She competed in a match alongside Persia Pirotta in a tag team match against Kayden Carter and Kacy Catanzaro.

Unfortunately, Pirotta and Hartwell lost the match because the latter was too distracted worrying about Lumis’ injury. Persia Pirotta insisted that she should compete alone for the time being and she even defeated Gabby Stephens and Jenna Levy in a two-on-one handicap match recently.

Dexter Lumis and Indi Hartwell delivered one of the most entertaining romantic storylines in WWE’s recent history. The two superstars engaged in a dramatic yet adorable angle that led to their on-screen wedding. This also led to Lumis saying his first words on WWE television, “I do.”

The writers are keen to exploit his absence by using it as a reason behind Hartwell’s current run. It will be exciting to see what’s in store for the couple on WWE NXT 2.0 as we advance.