Are we about to see the return of ‘Crazy’ Nikki Cross?

When Nikki Cross first made the jump from NXT to WWE‘s main roster, she brought her kooky, crazy character with her.

And what a character it was. Cross was not only dangerous in the ring, she also seemed like she could be a danger to society, in general. Often acting like an escaped mental patient, she would snap in the middle of matches. It was a great psychological advantage in terms of her onscreen character, and she played it to perfection.

Because she wasn’t the cookie cutter, Barbie Doll type of female wrestler that many of her cohorts were at the time, Nikki Cross was adopted by fans as a lovable underdog. They couldn’t wait to see her draping her body through the ropes or screaming and pulling her own hair, all while laughing maniacally.

Then, earlier this year, she went from being Nikki Cross to Nikki A.S.H. (Almost a Super Hero)

Nikki Cross is now referring to herself Nikki ASH 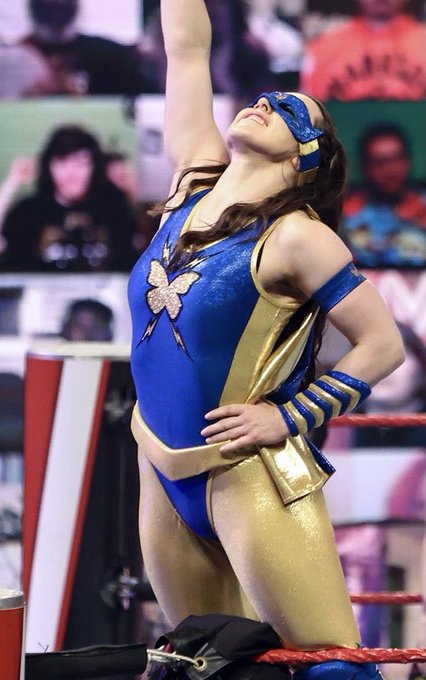 Nikki Cross is now referring to herself Nikki ASH

While some fans were willing to give the gimmick a chance at the time, many just dismissed it as another dumb move on WWE creative’s part.

Although the gimmick change resulted in her winning her first RAW Women’s Championship, it didn’t last long (33 days) and she has been mostly mired in mediocrity since. Her only tangible success has come when teaming up with Rhea Ripley, and even that has been tenuous at best.

On this week’s episode of RAW, Nikki finally seemed to show some signs of frustration and being at a turning point

There have been clues over the past several weeks that point to how much failure has been getting to Cross’s character, and it feels like even she knows this has all been a failure.

Hopefully, this will lead to a storyline where Nikki Cross can find a way to finally burn the cape and mask, and put on her old duds again. It’s time to see the lovable lunatic that we used to know return to a RAW ring. That Scottish spitfire who always made you wonder how much lithium it would take to control her mania.

She can still be a hero, but just less like Wonder Woman and more like Mel Gibson in ‘Lethal Weapon’: Borderline crazy, but with good intentions.

It’s the only role that has truly fit her during her time in NXT and WWE. It’s time to let her go back to what originally made her successful and leave her ‘secret alter ego’ behind.

Do you think Nikki Cross is about to rid herself of her superhero gimmick? Share your thoughts in the comments section below.