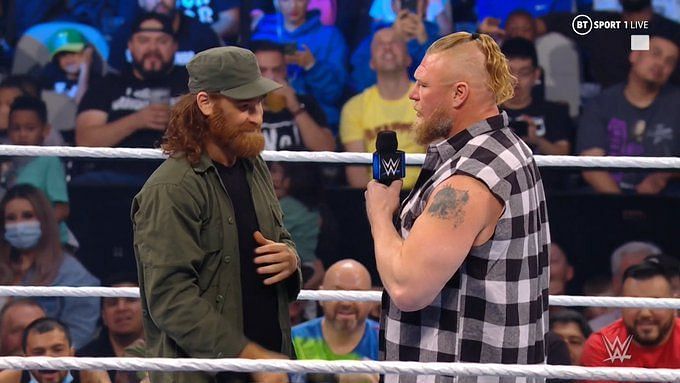 Are fans buying Brock Lesnar as a babyface?

In the running storyline between Brock Lesnar and WWE Universal Champion Roman Reigns, there has been a complete role reversal between the two Superstars.

It has featured one of the biggest 180 degrees turns we’ve seen in recent sports entertainment history. After years of babyface Reigns handing out tons of Superman punches and Spears to vanquish the villain Lesnar, we’re living in ‘Bizarro World’ now.

In what would have been unheard of just a few years ago in WWE, Lesnar is now the sheriff riding into town to tackle the evil land baron Roman Reigns.

The Tribal Chief and The Bloodline have been running roughshod over all of Smackdown – doing whatever they want to do – and the brand needs a hero to bust up their gang.

Ironically, that hero is Brock Lesnar.

The idea of Lesnar being the white knight of the blue brand may seem a little odd, but fans appear to be enjoying seeing a different side of him. He gets a great reception when the first sound effects of his theme song starts to play. In the end, The Beast Incarnate is so good that he’s kind of hard to boo anyway.

This is a personal switch for Brock Lesnar, as he has admitted at times in the past that he doesn’t necessarily care for the adulation of the fans.

An incredibly private person, he stays on his huge swath of property in Saskatchewan and generally avoids the public. It’s not that he hates people… he just doesn’t particularly like them much either.

This week, he ‘persuaded’ Sami Zayn into taking his title shot at Reigns, clearing the way for Lesnar to challenge for the crown at WWE Day 1.

It’s pretty clear that Brock Lesnar is the most serious threat to Reigns’ 450+ day run as the WWE Universal Champion. He will now have that opportunity to kick off the new year in a big way.

Lesnar was supposed to be in Zayn’s corner for support in the main event. Instead, The Beast Incarnate had been setting him up all along. He laid waste to Sami and left him for Reigns to squash quickly. It was the perfect move – for the good guy to outsmart the bad guy.

It also set up precisely the way Brock Lesnar wanted as he will have nothing and no one in his way to his collision course with Reigns.

All in all, Brock Lesnar has done an admirable job as the babyface foil to Roman Reigns thus far. He’s almost like a different person and seems to be enjoying this current run.

As we all know, he will likely return to being a heel sometime before the end of 2022, but it will still be intriguing to watch this current side of Lesnar evolve in the weeks ahead.

What do you think of Brock Lesnar as a babyface? Share your thoughts in the comments section below.