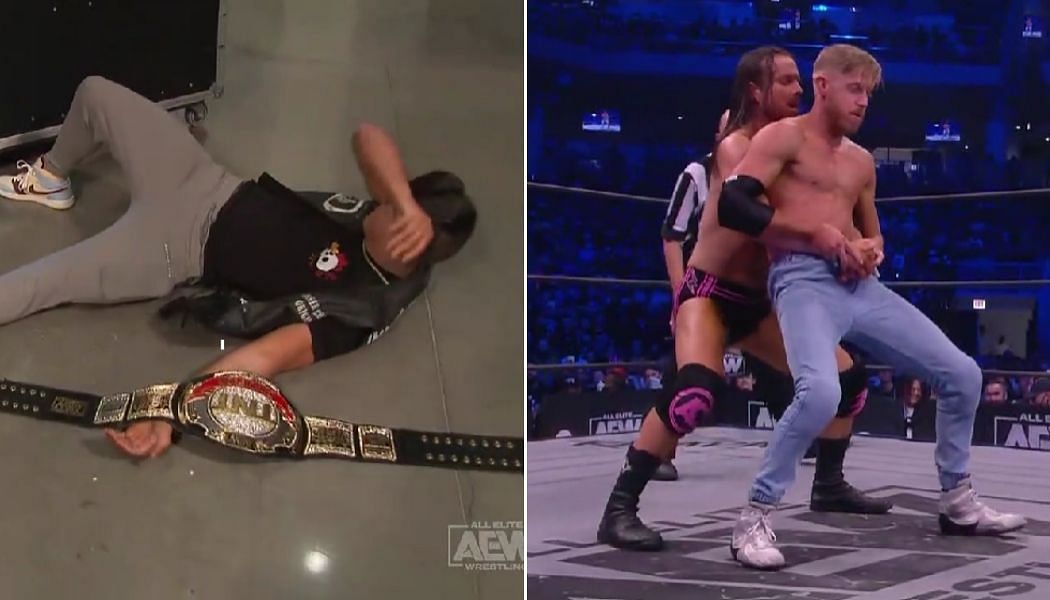 We got a very good Black Friday edition of AEW Rampage with three stellar matches on the card, including AEW Women’s Champion Britt Baker in action.

The main event saw the much-anticipated clash between Daniel Garcia and Eddie Kingston with 2.0 at ringside. Also, on the show, a former WWE star sent out a challenge to Sammy Guevara before attacking him backstage.

.@orangecassidy is a one man show on #AEWRampage NOW on @tntdrama! https://t.co/pfbhDvGBCC

Orange Cassidy tagged in, and we saw some great double teamwork from Cassidy and Wheeler Yuta. Cole ate a bodyslam before taking back control and tagging Bobby Fish back in. Fish rained down strikes on Wheeler Yuta in the corner before Cole returned.

Adam Cole hit Wheeler Yuta with a Ushi Goroshi before the heels traded tags again, continuing to work on Yuta. Wheeler struck back, and both men went down.

Fish was the first man up and got the tag. Cole charged at Yuta but was thrown out of the ring.

He went to make the tag, but Cole pulled Orange Cassidy out of the ring. Yuta finally made the tag and Orange Cassidy came in with lazy kicks to Adam Cole and Bobby Fish. Cassidy followed it up with a double dropkick and then a DDT on Fish.

Orange Cassidy and Wheeler Yuta then hit a double dive out of the ring, taking Cole and Fish. Yuta then hit a top rope splash on Cole for a nearfall. Yuta followed it up with a German Suplex to Fish, transitioning into a cover for another nearfall.

Bobby Fish had Orange Cassidy in a kneebar but Yuta broke it up. Cassidy then hit Cole with a Beach Break. Cassidy was setting up for the Orange Punch, but Cole pulled him out of the ring and tossed him into the steel stairs.

A big Black Friday win for @theBobbyFish and @AdamColePro against #BestFriends. Great way to kick off a Black Friday #AEWRampage on @tntdrama. Tune in NOW! https://t.co/SSCwTgt1Lx

Meanwhile, Bobby Fish hit Wheeler Yuta with a Falcon Arrow from the top rope to win.

Premier Athlete @TonyNese has been scouting @sammyguevara from the stands and challenges the Spanish God for the TNT Championship before going after Guevara’s injured ribs. Watch #AEWRampage NOW on @tntdrama!
8:48 AM · Nov 27, 2021
229
72

Tony Nese was backstage on AEW Rampage with Tony Schiavone. He said that he had been scouting talent over the last few weeks and wasn’t impressed. He said that he was ready to challenge Sammy Guevara for the TNT Championship.

Sammy then came and confronted Nese, saying that he was tired of new guys coming in and running their mouths. Nese hit Sammy with a cheap shot to take him down before walking away.

Don’t let the small frame fool you, @riho_gtmv is as tough and physical as they come! Watch #AEWRampage NOW on @tntdrama https://t.co/SO7JTXbvZ2

Riho started the match really strong, taking down Baker with multiple dropkicks. Britt rolled out to ringside to regroup and Riho headed to the top rope and took out Baker and Rebel with a crossbody. Back in the ring, the Doctor smashed Riho’s head against the turnbuckle to take back control.

Back from the break, Britt Baker took Riho down with a slingblade followed it up with right hands. Riho tried to fight back with strikes of her own but Baker tossed her into the corner. Baker went for an Air Raid Crash but Riho maneuvered out of it and hit a snapdragon suplex for a nearfall.

Riho headed to the top rope but missed her double stomp. Baker finally hit the Air Raid crash for a nearfall.

Baker went for a Curb Stomp but missed. Riho took her down and hit a double stomp from the top rope. Riho missed with the running knee strike but she then rolled up Baker for the three-count.

Eddie Kingston took control of the match early on AEW Rampage, raining down strikes in the corner. 2.0 ended up pulling Daniel Garcia out of the ring so that he could regroup.

Back in the ring, Garcia briefly took control of the match but Kingston bounced back and started dominating the young star.

Daniel regained momentum during the ad break, striking Kingston across the face and taking him down.

Garcia went to work on Kingston’s leg, wrenching it back and trying to ground him. Daniel then tried to lock in an armbar but The Mad King blocked it. Instead, Garcia booted Eddie in the face repeatedly before dragging him back to his feet.

Kingston’s leg was definitely hurting but he hit back with a Saito Suplex. He went for a second but Garcia retaliated with elbows to the back of the head. Garcia then locked in a kneebar but Kingston managed to grab the bottom rope.

Garcia went back to working on Eddie’s leg, losing his cool at one point, and striking Kingston with elbow strikes.

Garcia and Kingston traded strikes again before the latter hit a Spinning Backfist for the win.

2.0 attacked Eddie Kingston after the bell, leading to Chris Jericho running down from the commentary booth to make the save.