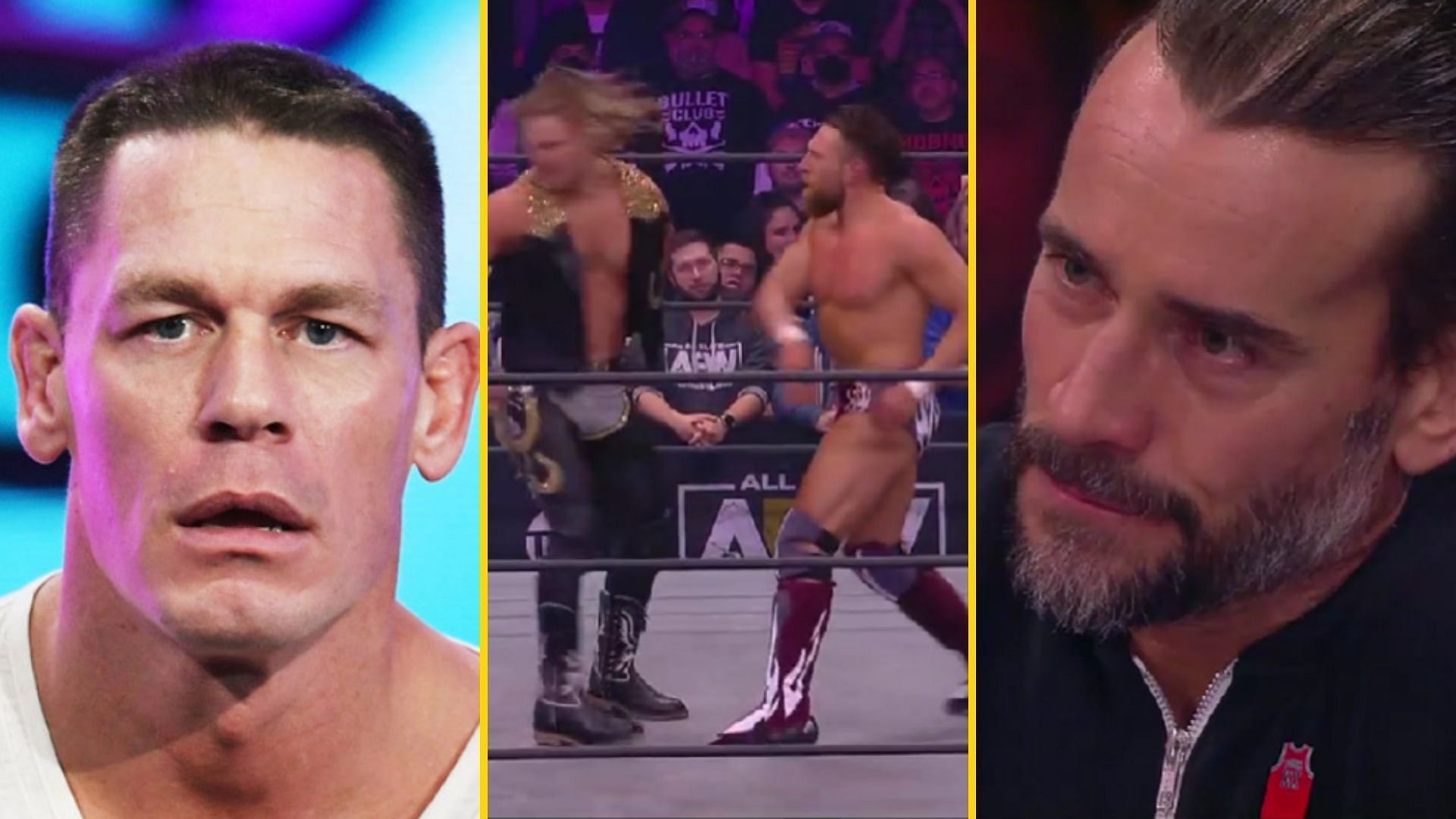 This week’s edition of AEW Dynamite was a fantastic watch from beginning to end, especially the opening segment between CM Punk and MJF. The feud between these two is heating up. Both CM Punk and Bryan Danielson also wrestled on the show tonight, and we had a major eight-man tag as the main event.

After all the talk, @The_MJF shows his true colors and backs away from @CMPunk – Watch #AEWDynamite LIVE everywhere on @tntdrama NOW! https://t.co/QeVeZ7IuSP

CM Punk came out for his match against QT Marshall, but he was first interrupted by MJF.

The Salt Of The Earth said that if CM Punk went toe to toe with him on the mic, it would be curtains for him, and he would be finished faster than his UFC career. MJF added that while CM Punk dropped pipebombs, he dropped nukes.

Punk grabbed a mic of his own, saying that he didn’t know MJF’s name was Maxwell, while he was under the impression MJF stood for ‘My Jealous Friend.’

Punk further added that what MJF was doing was not revolutionary, and in reality, he was just a less famous Miz.

MJF hit back, saying that CM Punk’s breath smelt like s**t, from all the a** he was kissing. He added that by the look of Punk’s eyes, he was the one who needed to Go To Sleep. MJF then namedropped John Cena, saying that CM Punk may as well teach ‘Hustle, Loyalty, Respect.’

MJF added that CM Punk should be scared because in WWE, he was treated as the cult hero because fans thought he was held down. He then challenged Punk to prove everyone wrong.

MJF added that while he was every promoter’s dream, Punk was just a tattooed guy from the worst part of the midwest – Chicago. He finished off by saying that Punk had always been second best, whether it be to John Cena and Triple H in the past or now to him.

CM Punk replied that he had indeed been scared when he came back after seven years. Punk replied that he was not scared any longer. The Straight Edge Superstar went on to say that when he decided to sign with AEW, he chose Darby Allin, something that must eat up MJF from inside.

Punk added that The Pinnacle Leader was so busy saying he was one of the pillars of AEW, he didn’t even realize Britt Baker had replaced him. Punk added that the only way MJF could become the No.1 guy in AEW would be if everyone waited long enough for Tony Khan to have a daughter he could marry.

CM Punk finished off by saying that the last time he was in Chicago he gave everyone free ice cream, and the thing he could give them that’s even better was by punching MJF.

.@CMPunk flies in with the clothesline on @QTMarshall – Watch #AEWDynamite LIVE everywhere on @tntdrama NOW! https://t.co/gKTcMKAdLU

CM Punk started the match strongly on AEW Dynamite, and Nick Comoroto and Aaron Solo were quickly ejected from ringside by the referee.

Punk took QT down with a back elbow before hitting a series of punches in the corner before Irish Whipping him into the opposite turnbuckle. Marshall briefly took control, but Punk wiped him out at ringside with a running clothesline.

QT took back control during the break, hitting Punk with a vertical suplex. Marshall locked in a side headlock. As Punk tried to break free, he took a knee to the midsection. QT then slapped Punk across the face, telling the latter that he was “nothing.”

Punk replied with a boot to the head, taking QT down.

QT put in a valiant effort, but it wasn’t enough.

#JurassicExpress have a ton of momentum and are the top ranked tag team in AEW! @Christian4Peeps is going to make sure they win the #AEW Tag Team Championships. Watch #AEWDynamite LIVE everywhere on @tntdrama NOW!
7:11 AM · Nov 25, 2021
388
103

#JurassicExpress have a ton of momentum and are the top ranked tag team in AEW! @Christian4Peeps is going to make sure they win the #AEW Tag Team Championships. Watch #AEWDynamite LIVE everywhere on @tntdrama NOW! https://t.co/K0m6xxoqnK

Christian Cage was backstage with Luchasarus and Jungle Boy on AEW Dynamite. Cage said that he’d just found out his pals were the No.1 ranked tag team and added that he was ready to help them win the gold.

Eddie Kingston was in catering when he was once again interrupted by 2.0 and Daniel Garcia. Matt Lee said that Kingston was happy and content now, and he was not hungry anymore. Daniel Garcia then tossed a cup of coffee in his eyes. Kingston had to be restrained by staff.

Billy Gunn and Colton Gunn blindsided Bear Country to start the match. Out at ringside, Bear Bronson charged at Colton Gunn, who sidestepped him, leading him to crash into the ring. Billy Gunn took out Bear Boulder at ringside with help from Austin.

Meanwhile, Colton Gunn hit Bear Bronson with the Colt 45 to pick up the win.

Sting’s music hit after the match. Austin Gunn charged up the ring to confront him, but Darby Allin took him out. Sting and Darby then headed to the ring, forcing Colton and Billy Gunn to back off.

Dante Martin was backstage on AEW Dynamite with Tony Schiavone, Lio Rush and Team Taz. Martin had the Team Taz contract in front of him. Rush tried to stop Dante, but he ended up signing the contract and leaving with Team Taz.

Both Thunder Rosa and Jamie Hayter locked up to start the match before it quickly spilled out to ringside. Rosa sent Hayter crashing into the barricade. Jamie hit back with clubbing blows across the back before the match got back into the ring.

Hayter took Thunder Rosa down with a back elbow and followed it up with a kick to the kidneys. Thunder Rosa hit back with a leg-trip, sending Hayter crashing into the bottom rope.

The match spilled back out to ringside. Rosa sent Hayter head-first into the barricade before getting back into the ring and hitting a baseball slide dropkick. That looked nasty.

Thunder Rosa in full control until a snap suplex from Hayter back in the ring.

Rosa tried to lock in a guillotone but Hayter easily powered out, tossing the former NWA Women’s Champion across the ring. She replied with a running dropkick to the corner on Hayter.

Jamie Hayter locked in a modified cravat hold but Thunder Rosa got back on her feet. Both women traded right hands before Hayter clubbed Thunder Rosa across the back.

She hit back with a Russian Legsweep before locking in the Peruvian necktie. Rebel then distracted the referee as Britt Baker broke the hold. Baker then accidentally hit Hayter with a superkick. Thunder Rosa then rolled up Jamie Hayter for the win on AEW Dynamite.

Jamie Hayter wasn’t happy with how things went down and pushed Baker away before walking to the back on AEW Dynamite.

We were backstage on AEW Dynamite with Dr. Britt Baker, Rebel and Tony Schiavone who were celebrating Thanksgiving.

Schiavone then informed Britt Baker that Riho had never been eliminated from the Casino Battle Royale and Tony Khan has now booked a match between her and Dr. Britt Baker for the Black Friday edition of Rampage.

Bryan Danielson was all over Colt Cabana in the early stages of the match, going for an armbar. But Cabana managed to grab the bottom rope. Bryan then charged at Colt Cabana in the corner but ran headfirst into the turnbuckle after the Dark Order member sidestepped him.

Bryan Danielson quickly hit back with a German Suplex and followed it up with a running boot in the corner. Danielson then unloaded with chops and tried to follow it up with a backdrop from the top rope. Cabana sent Danielson crashing to the mat and hit a moonsault for a nearfall.

Danielson replied with stomps in the middle of the ring and then locked in the Labelle Lock, forcing Cabana to tap out.

Bryan Danielson was interviewed by Tony Schiavone after the match on AEW Dynamite. Danielson said that AEW Dynamite would be in Atlanta next week and two Dark Order members were from that city. He asked anyone of them to step up and fight him.

AEW World Champion Hangman Page came down to the ring and challenged Danielson to a match then and there.

Bryan Danielson replied that Hangman wanting to wrestle him after he had already competed wasn’t ‘cowboy s**t’ but it was coward s**t.

Hangman said he wanted to fight and would let Bryan take the first shot. Danielson then slapped Hangman across the face. Hangman hit back with a boot and then went for the Buckshot Lariat but Bryan rolled out of the ring.

Cody Rhodes and Dax Harwood started things off, with the former taking the latter down early with a shoulder tackle. Cody followed it up with a powerslam before tagging PAC in. Cody had tossed his belt into the fans before tagging out but it was thrown back into the ring.

PAC worked on Dax Harwood‘s arm before Wheeler tagged in on AEW Dynamite. Wheeler had a wristlock on PAC, who hit back with a boot to the head. PAC then hit a bodyslam before tagging Penta in.

The luchador hit a diving kick from the top rope. Wheeler and Penta then traded strikes before Penta hit a superkick. Wheeler hit back with a clothesline before tagging Andrade in. Fenix also tagged in for his team on AEW Dynamite.

Fenix took Andrade down before Death Triangle hit a triple dropkick following a double tag. Cody Rhodes tagged himself in to a shower of boos. Rhodes got triple teamed in the corner while the referee was distracted. Malakai Black tagged in, as did Fenix.

Fenix was all over the heels, taking down everyone in sight. He hit an Escalera followed by a hurricanrana to Malakai Black, and got a boot on Andrade. Black hit back with nasty looking kicks in the corner.

The heels had Fenix isolated in their corner during the commercial break. Fenix hit back with a spinning kick, tagging Penta back in. He hit a double DDT to FTR followed by a Backstabber to Andrade. The match broke down at this point. Cody Rhodes accidentally hit his partner, PAC, with a superkick. Andrade capitalized and hit Cody but his running knees attempt was thwarted by PAC on AEW Dynami.

Tully Blanchard and Arn Anderson were the last men standing after all the competitors took themselves out, and they squared off inside the ring. Jose then got into the ring, and both Tully and Arn took him out.

Fenix then wiped out FTR with a splash. Penta and Fenix dived out of the ring, taking out Dax and Cash. Black hit PAC with the mist to the eyes aAndrade then hit the hammerlock DDT to pick up the win for his team on AEW Dynamite.