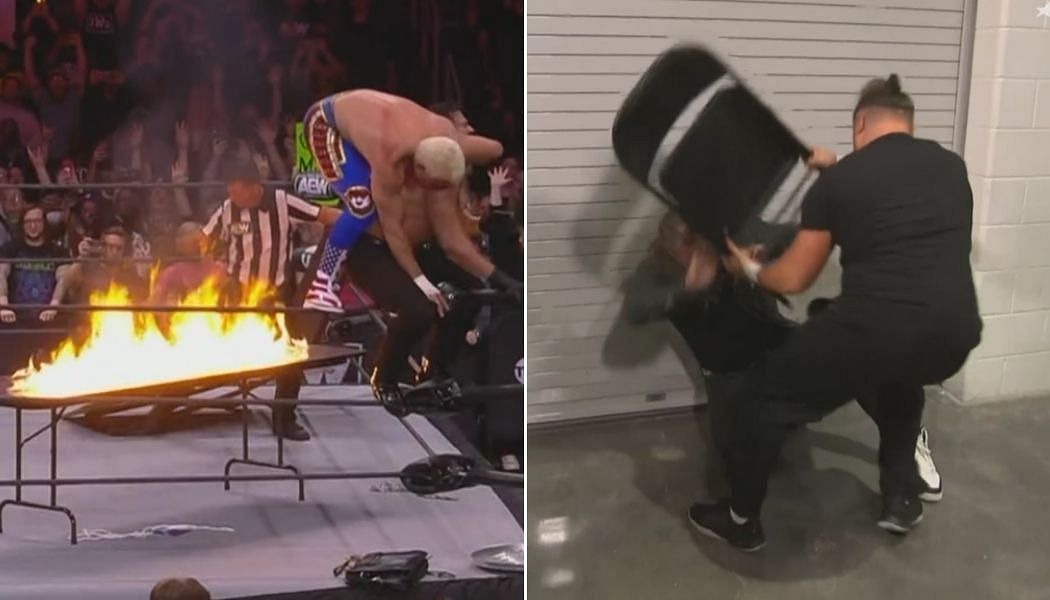 The card was stacked with Bryan Danielson and CM Punk also competing tonight. Sting and Dary Allin also wrestled against the previously undefeated Gunn Club. The show also featured the last quarterfinal of the TBS Title tournament between Kris Statlander and Ruby Soho.

Angels started the match strong but Danielson soon took control. Bryan had Angels reeling early on bon, he got back in it and sent Danielson crashing out of the ring.

Alan then hit a moonsault from the the turnbuckle to the outside. Back in the ring, The Dark Order member went for a second moonsault but missed his target.

Danielson stomped the hell out of Angels before quickly locking in a Kneebar and forced his opponent to tap out. Another incredible performance by Bryan Danielson.

Following the match, Tony Schiavone was in the ring with Danielson, who was showered with boos by the fans in attendance.

Danielson mocked the crowd in Atalanta by saying Alan Angels was the best competition they had.

He then said that AEW would be live from Long Island next week and he would be ready to kick John Silver’s head in.

With Tony Khan decreeing that Hangman Page needed to keep his hands off Bryan Danielson, the former WWE Champion tried to goad Page to come down to the ring.

John Silver came out and ran down instead. Danielson rolled out of the ring and tried to get Hangman to slap him before walking to the back.

MJF came out to do commentary on AEW Dynamite for this match before the bell rang. He spent most of the time running CM Punk down.

Punk got a headlock early on before Lee Moriarty hit back with a lateral press and transitioned it into an armbar. The Straight Edge Superstar hit back with shoulder charges in the corner and followed it up with a leg lariat.

Punk was in control of the match at this stage, whipping Lee into the corner. He went to follow up with a Running Knee Strike but ended up hitting the turnbuckle. Moriarty quickly took advantage and locked in a modified crossface. Punk looked like he was in deep trouble but managed to crawl over and put his foot on the rope.

Moriarty headed to the top rope but CM Punk caught him with a palm strike. Lee hit back with a lariat followed by a boot to the head for a nearfall.

Moriarty went to hit a suplex but CM Punk reversed it into the GTS. Punk then pinned Lee Moriarty for the win.

MJF took the mic after the match and berated Punk for calling himself the ‘Best In The World’ when he struggled to beat QT Marshall and Lee Moriarty.

Punk got a mic and told MJF to shut up and come down to the ring. The Salt Of The Earth refused the offer and promised to show him what a real professional looked like when he wins the Dynamite Diamond Batte Royal next week. MJF sank so low as to then take shots at CM Punk’s beloved dog Larry.

Dr. Britt Baker, Rebel and Jamie Hayter were backstage with Tony Schiavone on AEW Dynamite. She said it was disgusting that she had been forced to face Riho last week.

There was some tension in the group after what went down with Jamie Hayter’s match on the last edition of Dynamite. Baker then announced that Jamie Hayter will face Riho next week.

Adam Cole was out next and he headed for the commentary desk. Orange Cassidy’s music hit and he walked up to Adam Cole. Cole got into Cassidy’s face. Orange Cassidy then put his hands in his pockets as The Young Bucks sneaked up from behind.

Even though Cassidy spotted them, Adam Cole hit him with a low blow. The Bucks then superkicked Orange Cassidy. Chuck Taylor and Wheeler Yuta then came out with steel chairs to make the save.

Tony Nese said that Sammy Guevara doesn’t deserve to be TNT Champion and he would change that on Rampage.

Nese warned Guevara that he had taught him a valuable lesson on Rampage, before adding that he would see Sammy in the ring on Friday.

Wardlow took out AC Adams on AEW Dynamite with a powerbomb and quickly followed it up with a second. There was no respite for Adams as Wardlow hit a third powerbomb, quickly followed up by a fourth before pinning him.

Shawn Spears got into the ring after the match and smashed AC Adams with a steel chair to rub further salt into his wounds.

Sting and Darby Allin vs Gunn Club on AEW Dynamite

Darby Allin and Colten Gunn started the match. Darby took Colton down early with a legtrip and followed it up with an arm drag and a shotgun dropkick. Both Sting and Billy Gunn tagged in.

Sting took the fight to Gunn with repeated backfists followed by a chop. The former WCW Heavyweight Champion then went for a Stinger Splash but Billy rolled out of the ring.

Darby Allin tagged in and Billy Gunn planted him in the middle of the ring. Billy then tagged his son back in and Gunn Club had Allin isolated in their corner and continued to wear him down.

If you have this on your 2021 Bingo Card, bravo #AEWDynamite https://t.co/oMiwYt70AX

Darby Allin looked like he was busted open on AEW Dynamite. He hit Colten Gunn with a jawbreaker forcing him to tag his father back in. Billy Gunn showed off his incredible strength once again, hitting a standing Fallaway Slam followed by a Tilt-a-whirl bodyslam.

Colten Gunn tagged back in and locked in a Scorpion Death Lock on Darby Allin, mocking Sting as he did so. Darby managed to tag Sting back in.

Sting was all over both Colten and Billy Gunn, hitting Stinger Splashes on both men. Sting then took out Billy Gunn before locking in a Scorpion Death Lock, the real one, on Colten Gunn. Austin Gunn clocked Sting in the jaw with a cheap shot while the referee had her back turned.

Darby Allin wiped out both Austin Gunn and Billy Gunn with running tope suicidas out to ringside.

Allin then hit Colten Gunn with a Stunner and Sting followed it up with a Scorpion Death Drop. The Icon then pinned Colten Gunn to pick up the win for their team.

This was Gunn Club’s first loss in AEW, bringing their undefeated run to an end.

Chris Jericho was backstage with Alex Marvez when he was ambushed by Daniel Garcia and 2point0. Matt Lee took out Jericho with a steel chair, leaving him in a heap.

The odds don’t look good for @TheLionelGreen going up against #TeamTaz, especially now that they have signed @lucha_angel1 – Watch #AEWDynamite LIVE everywhere on @tntdrama NOW!
7:48 AM · Dec 2, 2021
269
66

The odds don’t look good for @TheLionelGreen going up against #TeamTaz, especially now that they have signed @lucha_angel1 – Watch #AEWDynamite LIVE everywhere on @tntdrama NOW! https://t.co/aNoGcYj4jY

Lio Rush came out with a mic and confronted Team Taz on AEW Dynamite. He said that he’d had the odds stacked against him all of his career. Rush added that he was a fighter, saying that even if he had a one percent chance of winning the Dynamite Diamond Battle Royale, he still wouldn’t go down without a fight.

Dante Martin and Ricky Starks then came out and confronted Rush as the segment ended.

Both women started off strong but it was Statlander who took control early. A lot of back and forth ensued at the beginning before Ruby Soho took control following a Flatliner.

Statlander hit back with a powerslam but Ruby Soho countered with a strike to the back of the head. Both women were down but it was Soho who was back on her feet first.

She headed to the top rope and hit a senton for a two-count. Statlander showed off her incredible power, hitting Soho with a Buckle Bomb followed by a Falcon Arrow for a nearfall.

Ruby Soho fought back with strikes in the corner but Statlander put her in a dangerous spot. Ruby countered with a poisonrana but it wasn’t enough to pick up the win. Statlander literally kicked out at the last second.

Soho then went to hit the No Future but it was blocked. Statlander went for the Big Bang Theory but Soho rolled her up for the win.

Nyla Rose attacked Ruby Soho after the match but Kris Statlander chased her away.

Andrade charged up the ramp as Cody Rhodes made his entrance on AEW Dynamite. Cody and Andrade brawled into the fans before fighting back to ringside. The former WWE star sent Cody face-first into the steel steps.

Cody then took a steel chair from T-Pain who was at ringside and smashed Andrade across the back.

Back in the ring, Cody Rhodes took off his weight belt and went to hit Andrade. But he was caught with a low blow. Andrade then took the belt and whipped Cody Rhodes with it before taking out a laptop and smashing Cody with it.

Andrade followed it up with a steel chair shot before taking out more weapons from under the ring.

Back inside the squared circle, Andrade hit an incredible split-legged moonsault. Cody Rhodes fought back and went for a Cody Cutter but the former NXT Champion pushed him out of the ring.

Jose and Arn brawled on the entrance ramp as Cody went to hit a Cross Rhodes on the apron. Andrade broke free and booted Cody Rhodes in the head.

Andrade had a steel chain wrapped around his fist and he smashed it into Cody Rhodes’ face. El Idolo looked to follow up with a moonsault but Cody flung the chair into his face mid-air.

Rhodes went on to follow up with a top suicida but this time Andrade smashed him with the chair.

Cody Rhodes then took out a sledgehammer from under the ring and then tossed it away to take out a golden shovel. He struck Jose with it before Andrade wiped him out with a dive on AEW Dynamite.

Back in the ring, Andrade hit a steel chair assisted double knees onto Cody’s face in the corner. Andrade then set Cody up on a table and headed to the top rope.

Cody stopped him and climbed up. Andrade went for a moonsault but Cody wiped his feet out from under him.

Brandi Rhodes then hit the ring and put lighter fluid on the table and lit it on fire. Cody Rhodes hit a reverse suplex to Andrade through the flaming table to pick up the win to close AEW Dynamite.