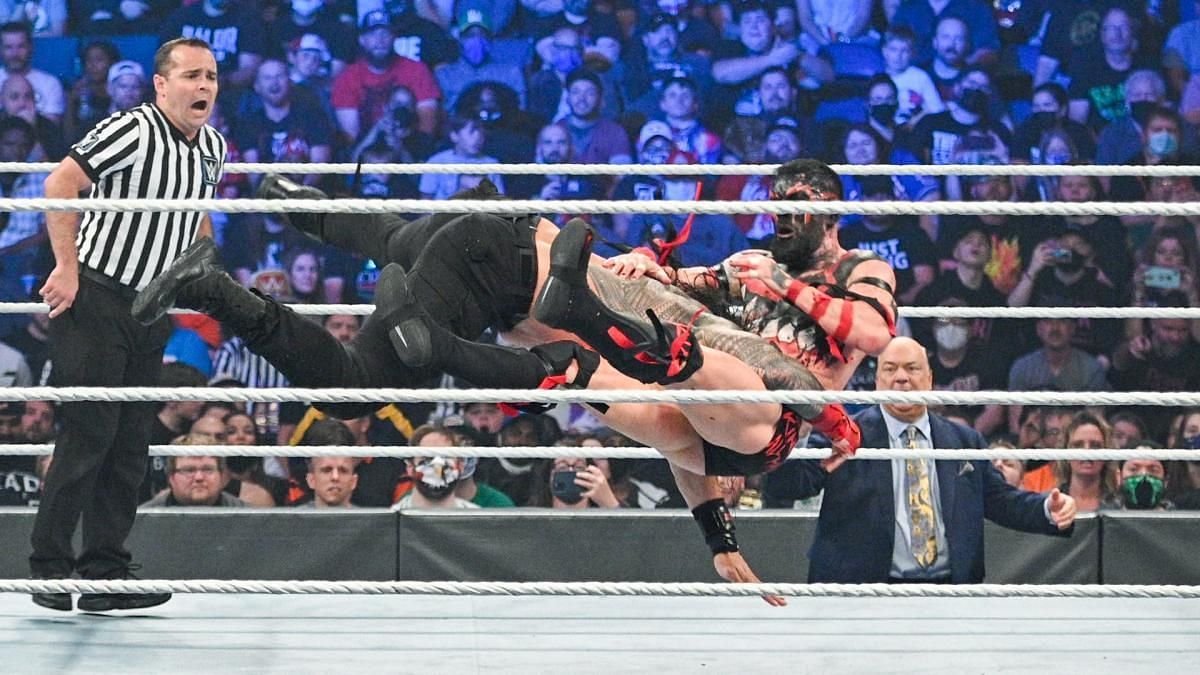 6 most effective finishers in WWE today

The finisher is the most important weapon in any wrestler’s arsenal.

While a signature move helps put the opponent down, the finisher seals the deal if executed to perfection.

Over the years, the WWE Universe has seen legends execute their finishers with great effect in overcoming opponents. Some of the most famous finishers have been – The Stunner by Stone Cold Steve Austin, The Pedigree by Triple H, The Rock Bottom by The Rock, Sweet Chin Music by Shawn Michaels and, to top the list, The Tombstone Piledriver by The Undertaker.

In this article, we look at the six most effective finishers in WWE today:

Former WWE Champion Drew McIntyre’s primary weapon of destruction, the Claymore Kick, is one of the most lethal finishers in WWE.

The Scottish Superstar has put a host of opponents down with this move, the likes of which includes of Randy Orton, Bobby Lashley, Roman Reigns and Brock Lenar. Drew, in this move, comes at his opponent at full speed from the opposite end of the ring kicking through the air in their face. The momentum that he manages in this maneuver makes it a very effective finisher.

In an interview with WWE Hall of Famer Stone Cold Steve Austin on Broken Skull Sessions last year, McIntyre revealed how he came up with this finisher:

“It was brought to me because of 3MB. The greatest thing that 3MB ever gave me was the Claymore. If you remember the beginning of 3MB, we had the super tight leather pants that the office made because I certainly did not have them commissioned.”

The Scottish Warrior has certainly soared leaps and bounds in WWE using this move.

AJ Styles has used his finisher, The Phenomenal Forearm, to great effect in WWE.

The Phenomenal One in this move leaps from the top rope, like Superman slamming his fist in the opponent’s face. Styles makes the maneuver look very real and has put countless superstars to rest with this move.

Apart from the Phenonmenal Forearm, the former two-time WWE Champion has also used his other finisher, The Styles Clash, to reap effective results.

There are few finishers in WWE today as effective and popular as The Curb Stomp by Seth Rollins.

The Visionary has decimated a host of opponents with this move, with the latest casualties being Jeff Hardy at Survivor Series 2021 and Finn Balor on the latest edition of RAW. Rollins, in this move, runs towards his kneeling opponent and stomps his head into the mat which spells the end for the opponent.

The move has been so effective for the former four-time world champion that most often than not it earns him the pin.

Better watch your back #RKO Viper 🐍

Better watch your back #RKO Viper 🐍

The RKO is by far one of the most effective as well as versatile finishers in WWE.

Future WWE Hall of Famer Randy Orton has been decimating opponents for almost two decades with this finishing move. The best part about this maneuver is The Viper strikes with the RKO when the opponent least expects it and it doesn’t take much out of him.

In this move, Randy jumps towards the opponent and grabs his head in a three-quarter facelock while parallel to the ground. He then finishes it by slamming the opponent’s face on the mat in a cutter.

The reigning RAW Tag Team Champion has been using this move recently on his rival AJ Styles to great effect, striking the Phenomenal One with the RKO out of nowhere.

Brock Lesnar hitting the F5 on John Cena after #SummerSlam went off the air!! https://t.co/YPaxRaTwzk

One of the most destructive finishers in WWE today is the F5. It’s no surprise that it comes from a man who believes in complete domination and destruction, Brock Lesnar.

The Beast Incarnate has annihilated plenty of opponents over the last two decades with this move, which most often gets him the win. The F5 is a face buster where Brock picks up his opponent on his shoulder and slams him face first on the ring mat.

The former eight-time world champion continues to use the move to great effect to this day in WWE.

The Spear is a finisher used to great effect by a host of superstars like WWE Hall of Famers Goldberg and Edge, as well as Bobby Lashley.

With that being said, one man has made this move very famous by making it his finisher. Universal Champion Roman Reigns has overcome numerous opponents with the Spear and continues to reign supreme in WWE with this finisher.

In the manuever, Reigns charges towards his opponent and brings him down by attacking his midriff. The Tribal Chief recently used this finisher to great effect on Big E at Survivor Series 2021. He emerged victorious and as a result was anointed the top World Champion in all of WWE.

What is your favorite finisher in pro wrestling today? Let us know in the comments section below.