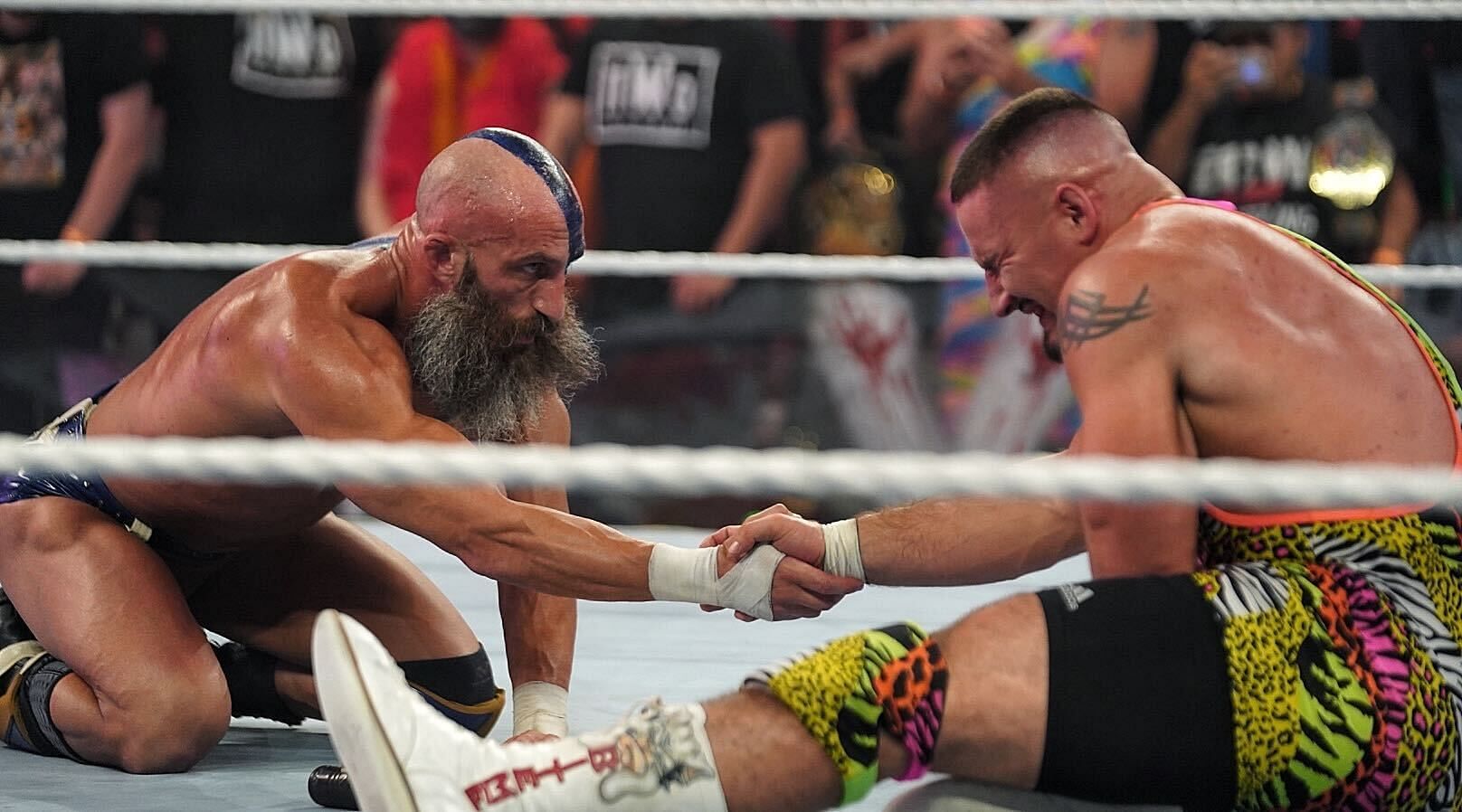 5 things that must happen at NXT TakeOver: WarGames 2021

WWE NXT TakeOver: WarGames 2021 will be the final TakeOver event for the revamped brand this year. Several new superstars have come in the past couple of months. Their inclusion will help the creative team build better matches in the future.

The youngest NXT Superstar, Cora Jade, will team up with former champions Raquel Gonzalez, Io Shirai, and Kay Lee Ray for the women’s WarGames match. They will take on the heel team of Dakota Kai, Mandy Rose, Gigi Dolin, and Jacy Jayne.

Duke Hudson and former NXT Million Dollar Champion Cameron Grimes will face each other in a Hair vs. Hair contest. Imperium will defend the NXT Tag Team Championships against Von Wagner and Kyle O’Reilly.

NXT knows how to book some great matches, and fans will look forward to the creative team giving them the best action before the end of the year. Who will come out on top at the end of Sunday night? Will NXT 2.0 reign supreme over the veterans at WarGames?

This will be the first time Undisputed ERA will not be part of the event. Check out the five things that must happen at NXT TakeOver: WarGames this year.

#5. Harland must lash out at Diamond Mine at NXT TakeOver: WarGames 2021 Joe Gacy will challenge Roderick Strong for his title at NXT TakeOver: WarGames 2021. The NXT Cruiserweight Champion will come out with Diamond Mine for his title defense.

Joe Gacy will likely have Harland by his side for the match. The former has been rather impressive as an in-ring performer and will have all the confidence walking into the contest.

Strong will rely on some help from The Creed Brothers and Ivy Nile during the Cruiserweight Championship match at TakeOver: WarGames. Surprisingly, NXT has pulled him out of the rivalry with Jacket Time and Odyssey Jones for a new rivalry.

NXT must allow Harland to show up with Gacy and decimate The Creed Brothers at ringside. He must also attack Strong, costing Joe the match via disqualification.

The angle will further push Harland as an unstable individual while giving Strong a successful title defense without pinning Gacy. Since The Messiah of the Backbreaker is a true cruiserweight, it will be the right call to keep the title on him.

O’Reilly has won the titles several times in the past. However, this will be Wagner’s first time challenging for the championships. While the duo is doing well as a team, NXT must allow Imperium to retain their titles.

Aichner and Barthel had a rather ordinary run with the titles in their first reign. NXT must look to give the two men a better reign this time around and put down their opponents on Sunday.

#3. Dakota Kai must pick up the win for her team at NXT TakeOver: WarGames 2021

A new chapter will be written in the rivalry between Dakota Kai and Raquel Gonzalez at NXT TakeOver: WarGames 2021. The latter has been able to defeat Kai each time they have faced each other.

Kai will join forces with Toxic Attraction in a match against Gonzalez, Io Shirai, Cora Jade, and Kay Lee Ray at WarGames. NXT must allow The Captain of Team Kick to successfully pick up the final pin to win the match for her team.

Kai has suffered a lot of setbacks during her NXT career. Her team’s victory at TakeOver: WarGames will allow her to climb to the top of the roster and get into the title scene.

#2. Dexter Lumis must get back at Carmelo Hayes at NXT TakeOver: WarGames 2021

Carmelo Hayes and Trick Williams injured Dexter Lumis’ hand weeks before NXT TakeOver: WarGames 2021. This has kept Lumis out of the WarGames match, where he could have been a natural fit.

The Tortured Artist must return at TakeOver: WarGames when Williams is trying to help Team 2.0 during the match. Lumis must lay out Williams and then enter the WarGames structure to pull out Hayes.

His actions could allow Team Black & Gold to take advantage in the ring. Lumis’s rivalry with Hayes and Williams at WarGames could be the perfect place to take their storyline to the next level.

Bron Breakker broke into the NXT Championship picture right after his first match on the revamped brand. While he failed to beat the current champion, Ciampa, Breakker could be back in contention after his actions at TakeOver: WarGames.

NXT must allow Breakker to dominate his opponents inside the WarGames structure and make a statement. Then he must hit his finisher on The Blackheart and pin him to pick up the win for Team 2.0.

The finish will allow Breakker to move back into the NXT title picture. It will also protect the other veterans of the brand from taking the fall.