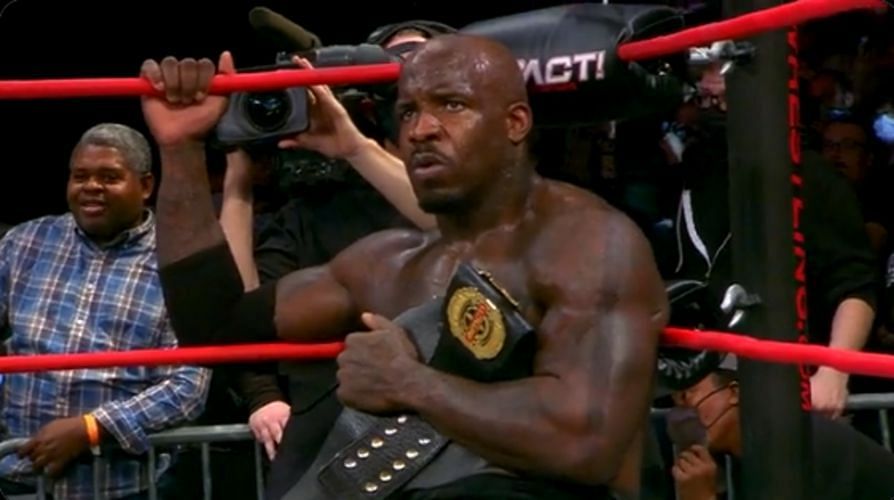 It was a newsworthy edition of IMPACT Wrestling this week, as we witnessed the fallout from the Turning Point pay-per-view. The show also built up towards the Hard to Kill pay-per-view, which will air on January 2022.

Knockouts champion Mickie James had an altercation with her challenger Deonna Purrazzo as they built towards their highly anticipated rematch. X-Division champion Trey Miguel reflected on his successful title retention at Turning Point. Matt Cardona had a few words for the IMPACT World Champion Moose which led to a massive brawl. A former WWE star also made his in-ring debut for the promotion.

So without further ado, let’s check out the 5 Talking Points from this week’s show.

#5 X-Division champion gets into a brawl on IMPACT Wrestling

X-Division champion Trey Miguel battled Steve Maclin and Laredo Kid at Turning Point where he defended his title successfully by pinning the latter. Heading into the match, he had vowed to pin Maclin to retain his title.

Miguel cut a promo where he reflected on his win but expressed his regret at not being able to fulfill his promise when he was blindsided by Maclin. The two had a brawl leading security to separate them but the champion took them all out with a dive and stood tall.

Maclin has been relentless since joining IMPACT Wrestling.

Can’t get rid of me, can’t beat me, you simply can’t kill me @TheTreyMiguel
#MACLIN

Can’t get rid of me, can’t beat me, you simply can’t kill me @TheTreyMiguel
#MACLIN

Heath and Rhino have been feuding with VBD for a long time. The duo faced them at Turning Point, where they were unable to walk away with the win.

After conquering their foes, VBD turned their attention towards their longtime rivals, Willie Mack and Rich Swann. The two teams had a tag match where the latter picked up the win.

Violent By Design assaulted Rich Swann & @Willie_Mack after their match but @HEATHXXII & Rhino were there to even the odds!

Violent By Design assaulted Rich Swann & @Willie_Mack after their match but @HEATHXXII & Rhino were there to even the odds!

However, VBD attacked them after the match and gained the upper hand, thanks to their numbers advantage. Heath and Rhino made the save and sent VBD packing.

Jai Vidal, a local competitor who was squashed by Eric Young a few weeks ago, begged IMPACT Wrestling‘s Executive Vice-President Scott D’Amore for another chance.

The latter put him in a match with JONAH, who shocked the world when he made his IMPACT Wrestling debut at Turning Point when he brutally attacked former IMPACT World Champion, Josh Alexander.

JONAH made a triumphant start to his in-ring career in the IMPACT Zone by making quick work of his opponent.

Just a taste of whats to come.

“To be the best, you have to go through the 𝖙𝖔𝖕 𝖉𝖔𝖌.”

“To be the best, you have to go through the 𝖙𝖔𝖕 𝖉𝖔𝖌.”

Just a taste of whats to come.

JONAH previously competed in the WWE under the ring name Bronson Reed. He was an integral part of NXT where he feuded with the likes of Roderick Strong and Karrion Kross. He even held the NXT North American championship for a short reign of 42 days before dropping the title to Isiah Scott of Hit Row.

Deonna Purrazzo made her return by launching an assault on the Knockouts champion Mickie James after the latter successfully defended her title against Mercedes Martinez at Turning Point.

The Virtuosa also declared that she be invoking her rematch clause at Hard to Kill next month. Chris Sabin faced Matthew Rehwoldt this week where Purrazzo interfered in the contest by providing a distraction. However, James attacked her, allowing Sabin to pick up the win.

.@SuperChrisSabin has an ally in the Knockouts World Champion, @MickieJames!

.@SuperChrisSabin has an ally in the Knockouts World Champion, @MickieJames!

IMPACT Wrestling kicked off with a promo from Matt Cardona where he spoke about his match against W.Morrissey at Turning Point. He claimed he would have beaten Morrissey if not for the interference from IMPACT World Champion Moose.

He stated that the only reason he joined the company was to win the IMPACT Wrestling World championship and called out the current titleholder.

Cardona gained the upper hand but Morrissey blindsided him. The numbers game caught up to him quickly but Eddie Edwards made the save which set up the tag team main event for later in the night pitting Edwards & Cardona against Moose & Morrissey.

“You’re nothing but a mid-carder!”

IMPACT World Champion @TheMooseNation sounds off on @TheMattCardona, leading to a wild brawl to kick off #IMPACTonAXSTV!

“You’re nothing but a mid-carder!”

IMPACT World Champion @TheMooseNation sounds off on @TheMattCardona, leading to a wild brawl to kick off #IMPACTonAXSTV!

During the closing moments of the main event, Cardona reversed a uranage attempt from Moose into a pinfall to secure the win for his team.

.@TheMattCardona has scored a pinfall victory on the IMPACT World Champion!

.@TheMattCardona has scored a pinfall victory on the IMPACT World Champion!

Following the match, the faces headed to the back and Morrissey took Moose out with a big boot to close the show. After the show, Scott D’Amore announced a triple threat match between Moose, Morrissey and Cardona for the world title at IMPACT Wrestling: Hard To Kill.

What do you think of IMPACT Wrestling’s product recently? Share your thoughts in the comments section below.