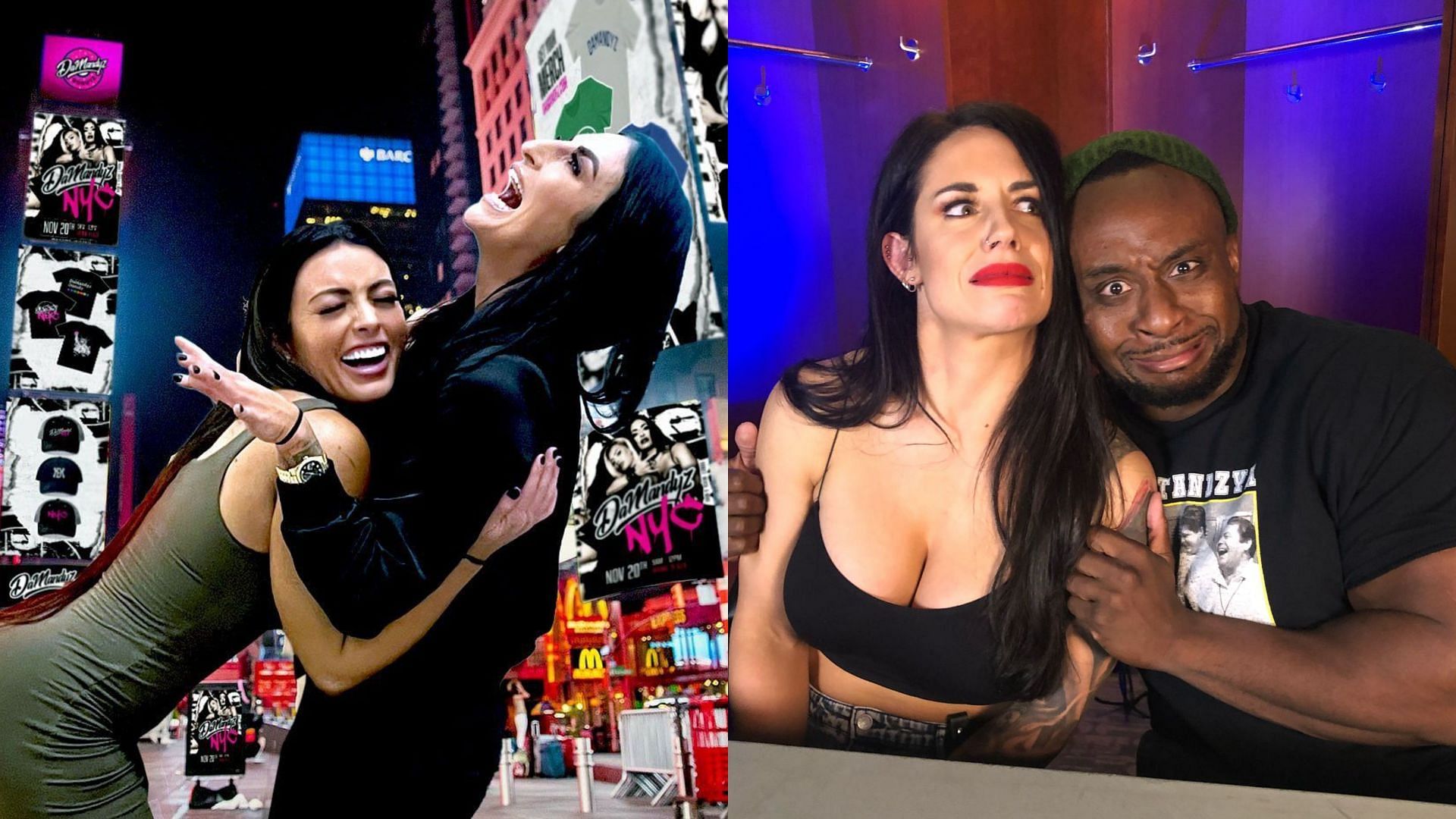 In the past few years, many rumors have suggested that some WWE Superstars were dating. However, these speculations were false.

Several WWE Superstars have got into romantic relationships with their colleagues in the past few years. With some trying to keep their romance private, including Seth Rollins and Becky Lynch, as the couple started dating, rumors about their relationship quickly spread in early 2019 until they later confirmed the news.

Rumors have suggested that a few other WWE Superstars have dated in the past few years. These rumors turned out to be untrue. In interviews, some of these wrestlers addressed the speculations, explaining the truth behind them.

Here are five rumored WWE real-life romantic relationships that were not true.

Big E joined WWE in 2009 and made his way to the Monday Night RAW main roster three years later. Former Divas Champion Kaitlyn was also on the RAW roster at the time. The two wrestlers spent a lot of time together backstage, and several photos of them circulated on the internet.

Kaitlyn and Big E briefly worked together in 2013 and faced each other in a mixed tag team match. Rumors quickly spread about the two wrestlers being in a relationship.

During his appearance on the Oral Sessions with Renée Paquette earlier this year, Big E denied dating Kaitlyn. He also clarified if he is still keeping in touch with the former Divas Champion.

“Not as much as when we were on the road all the time, of course, and she’s busy with her life. But from time to time, I think I texted her a couple of weeks ago because I’m really proud of her journey. She dealt with a really messy divorce and I met her current lover and he’s a great dude,” he said. 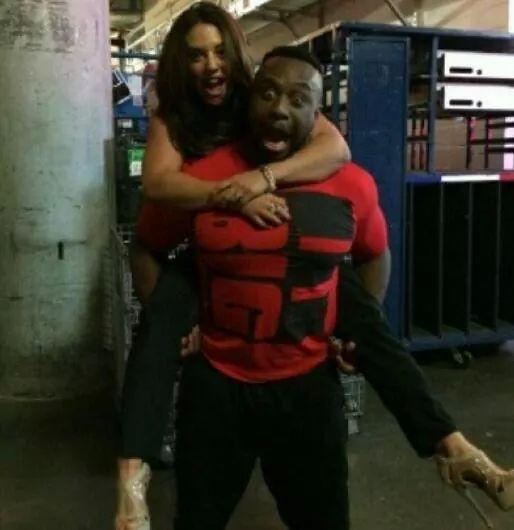 Kaitlyn left WWE and retired in 2014. She returned to the squared circle in 2018 to compete on the independent circuit. That same year, she returned to WWE for the first time in four years to participate in the Mae Young Classic tournament, where she was eliminated in the second round. The former Divas Champion also appeared with Big E in an episode of WWE Playback to watch their 2013 match together.

Kaitlyn made her last WWE appearance in 2019 during the RAW Reunion episode. The 35-year-old has not competed since December 2019 and lost her final match against Nicol Lucero at GWA’s 3rd Annual Toy Drive.

The Baylor Era in NXT was hands down one of the best times in NXT. Both Finn and Bayley made great champions. I miss their adorably wholesome interactions ♥️ 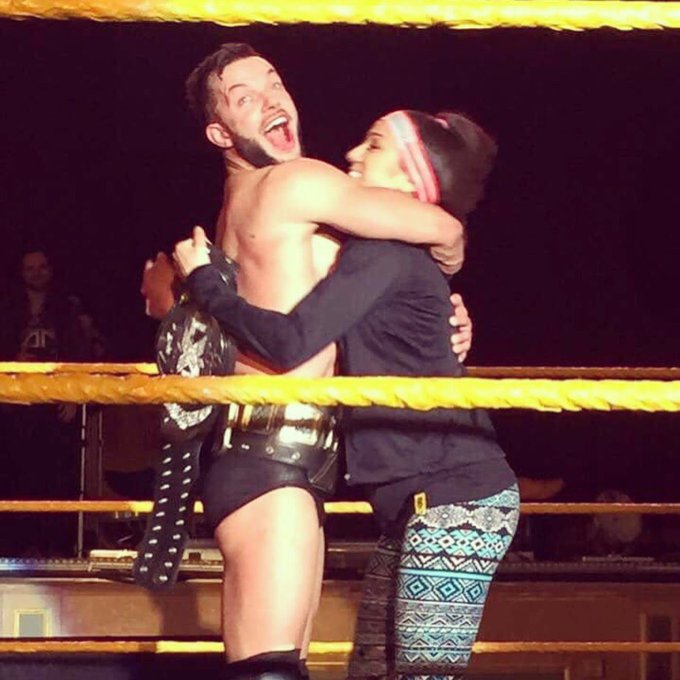 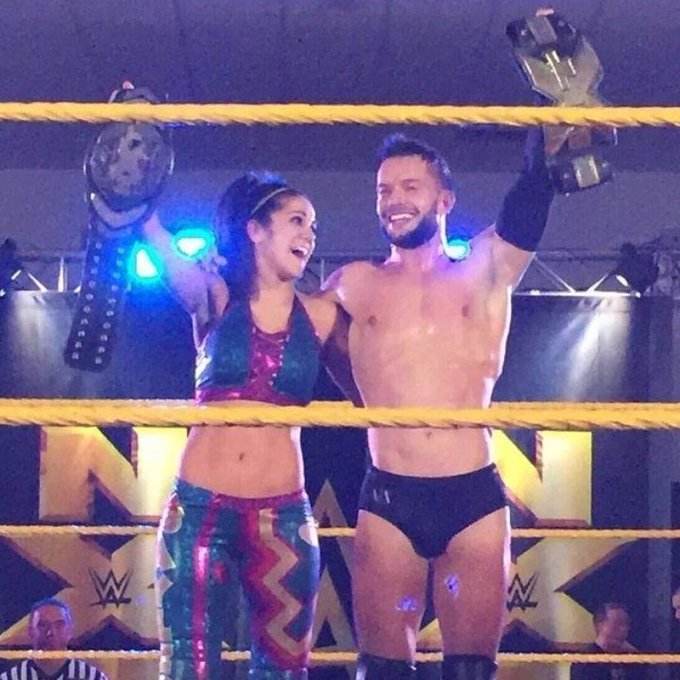 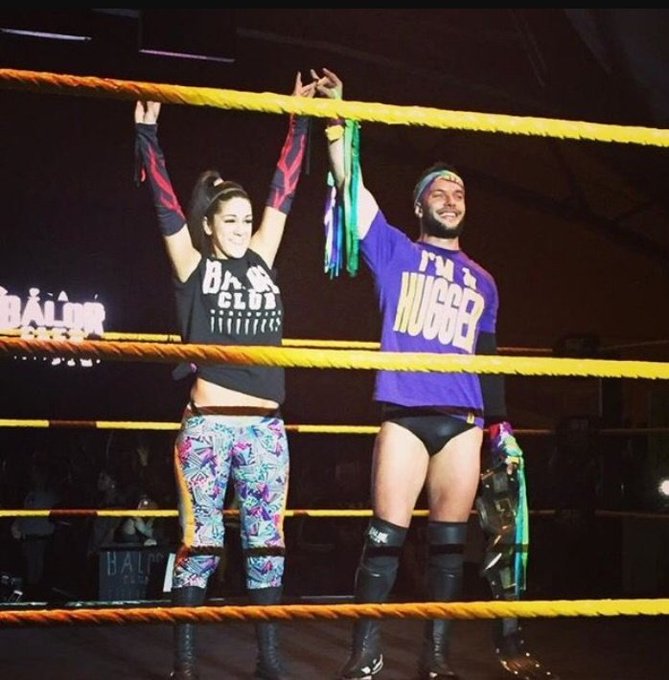 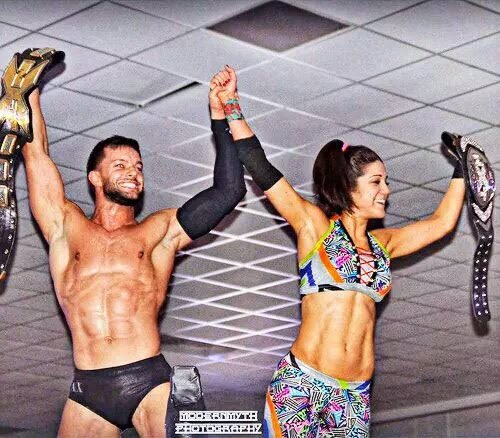 The Baylor Era in NXT was hands down one of the best times in NXT. Both Finn and Bayley made great champions. I miss their adorably wholesome interactions ♥️ https://t.co/eKXifBCCr7

Bayley and Finn Balor have worked together several times in WWE. They also imitated each other’s entrances on NXT and even participated as a team in the 2018 Mixed Match Challenge.

In the past few years, the two wrestlers took several pictures together backstage. In 2017, Balor posted a photo with his parents and Bayley backstage and captioned it “meet the parents.” The post raised questions about Bayley and Balor’s relationship. Rumors spread about them being a real-life couple.

Earlier this year, Bayley addressed these rumors, revealing that they got her in trouble in her past relationship.

“One time, I had gotten into trouble for this in my past relationship. We took a picture with his [Finn Balor] parents when we were backstage. And then people went ‘Oh my god! are you really together?’ (…) We are not married. He is married to a beautiful woman and he seems so happy. That was so fun, and then we got to be Mixed Match Challenge partners,” she said on Renee Paquette’s Oral Sessions podcast. 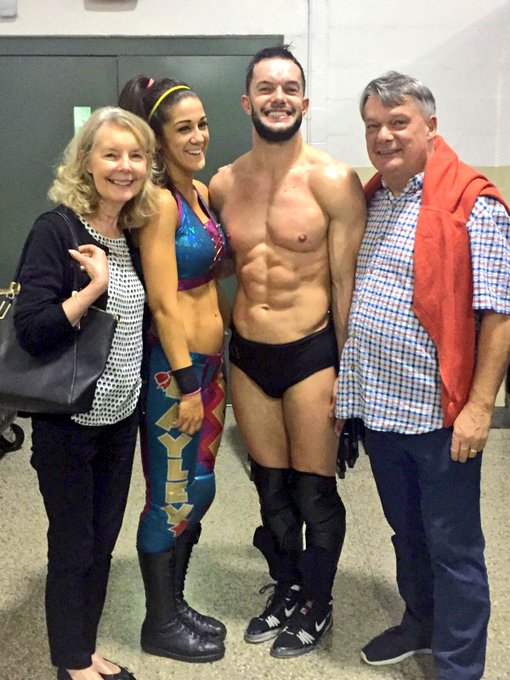 ⓘ this user misses Andrade and Zelina Vega together 😥 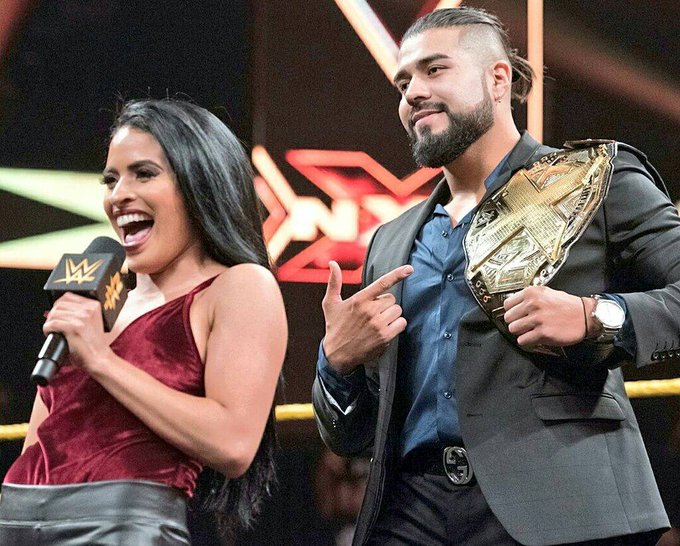 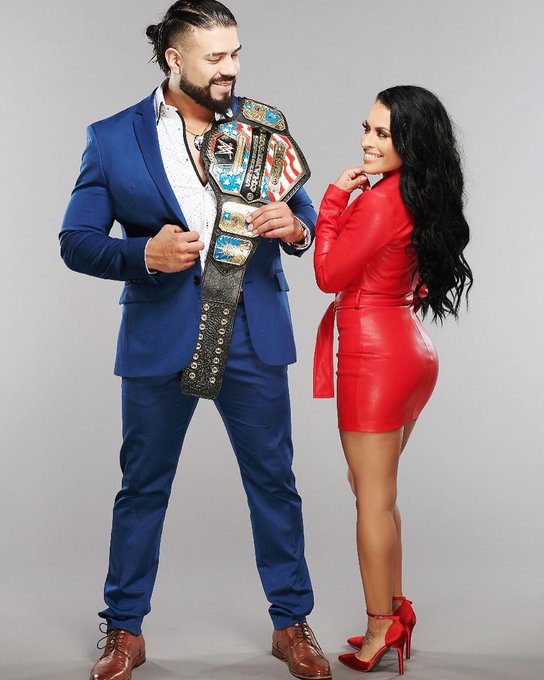 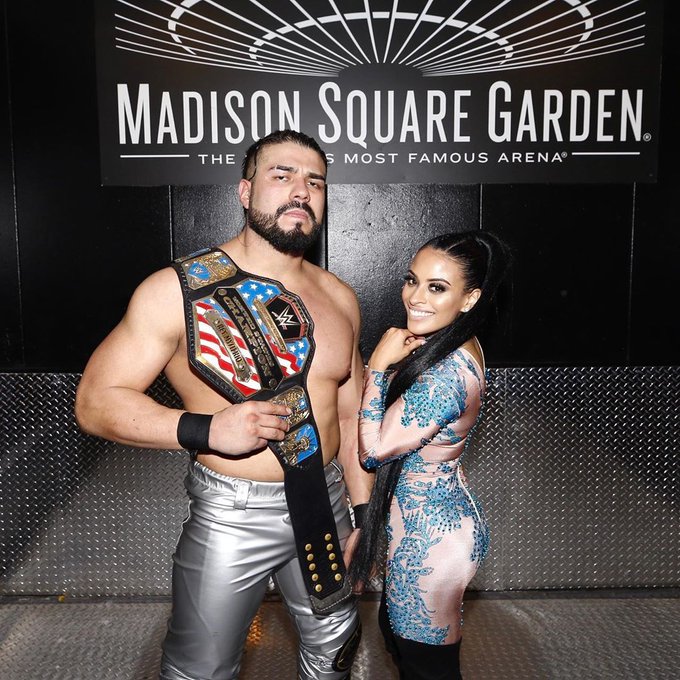 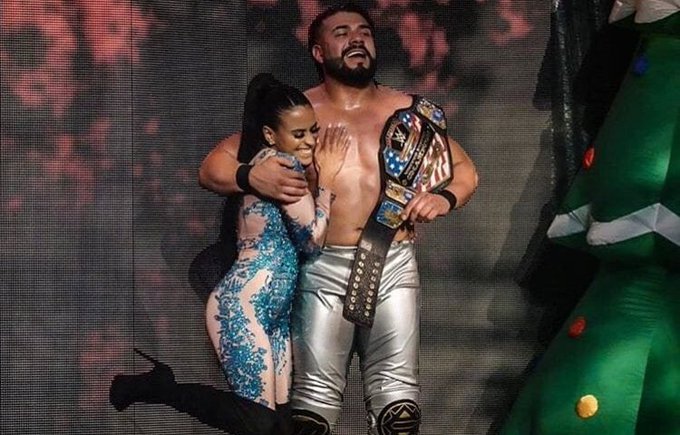 ⓘ this user misses Andrade and Zelina Vega together 😥

Zelina Vega joined WWE in 2017 and soon became Andrade’s manager on NXT. The two had great on-screen chemistry that led WWE to keep them together for nearly three years.

As they continued working together on-screen, rumors circulated online that Vega and Andrade were dating in real life, and all the speculation was untrue.

Unlike what people thought, including Triple H himself, Vega was not dating Andrade but former WWE superstar Malakai Black in real-life. The Game was surprised when the current Women’s Tag Team Champion told him she was marrying Black.

Let’s be honest, Andrade’s days were numbered after Zelina Vega got released from WWE

Let’s be honest, Andrade’s days were numbered after Zelina Vega got released from WWE https://t.co/WIHqqPgUV6

Andrade also started a relationship with Charlotte Flair in early 2019. They announced their engagement in January 2020. The Mexican wrestler left WWE last March and is now a current competitor in AEW.

John Cena has dated a few WWE Superstars in the past two decades. Nonetheless, Carmella was not one of them.

Cena was engaged to Nikki Bella until they decided to call off their wedding in April 2018. Earlier that same year, Carmella confirmed her split from her boyfriend, Big Cass. Rumors started spreading that The Leader of the Cenation and Carmella had begun dating.

In May 2019, Carmella addressed these rumors on The Bellas Podcast. She denied ever dating the 16-time world champion.

“Oh my God. That is the most insane rumor because at the time that was when I broke up with my ex and because John lives in Tampa, I lived in Tampa… It was so insane. I don’t know how you did it for so long. Where do they come up with this s**t?” she said.

Which is better couple? 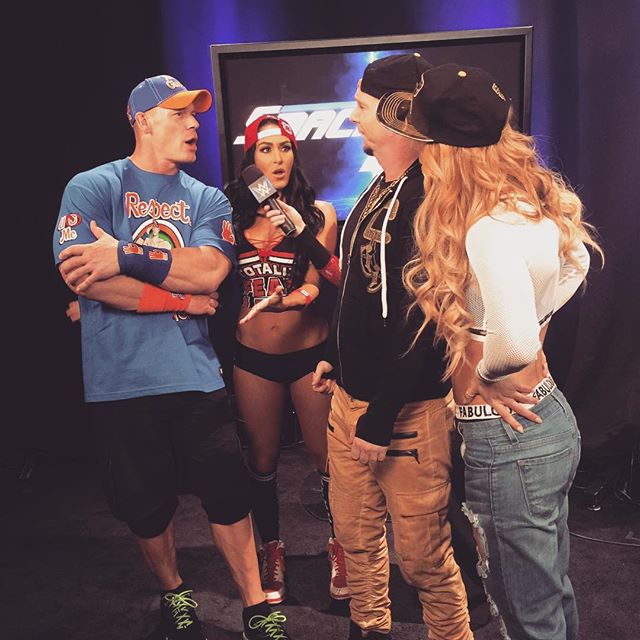 Which is better couple?

RT for John Cena & Nikki Bella
Like for James Ellsworth and Carmella https://t.co/gnQd10LB7F

Both Sonya Deville and Mandy Rose participated in the sixth season of WWE Tough Enough in 2015. Despite not winning the competition, WWE signed both women. Two years later, they debuted together on the main roster as part of Absolution, alongside Paige.

After Paige’s retirement, Deville and Rose continued their partnership, forming Fire & Desire on SmackDown. The once roommates were not just on-screen partners but also real-life best friends, who launched a YouTube show called Damandyz Donutz and did several photoshoots together.

Seeing how close Rose and Deville were, a rumor spread that their relationship was more than friendship. Many people have speculated that the former members of Fire & Desire were dating in real life.

In 2019, the current NXT Women’s Champion addressed these rumors in an interview with Distractify.

“I think it’s obviously just rumors. Everyone can get different vibes from the way we are portrayed on TV. I feel like for my character too, it’s a little bit more hot bombshell, a little more sexual too, so I think some of the things I do can be portrayed as that. But as of now, we are just going to have to wait and see,” Rose said.

Fire & Desire disbanded last year as Rose and Deville got into an on-screen feud. Their feud ended at last year’s SummerSlam when God’s Greatest Creation defeated her former tag team partner. They have gone their separate ways in WWE ever since.

Meanwhile, Deville and Rose remain best friends and business partners in real life despite not working together on-screen. They regularly post photos of their photoshoots and outings on their Instagram accounts.