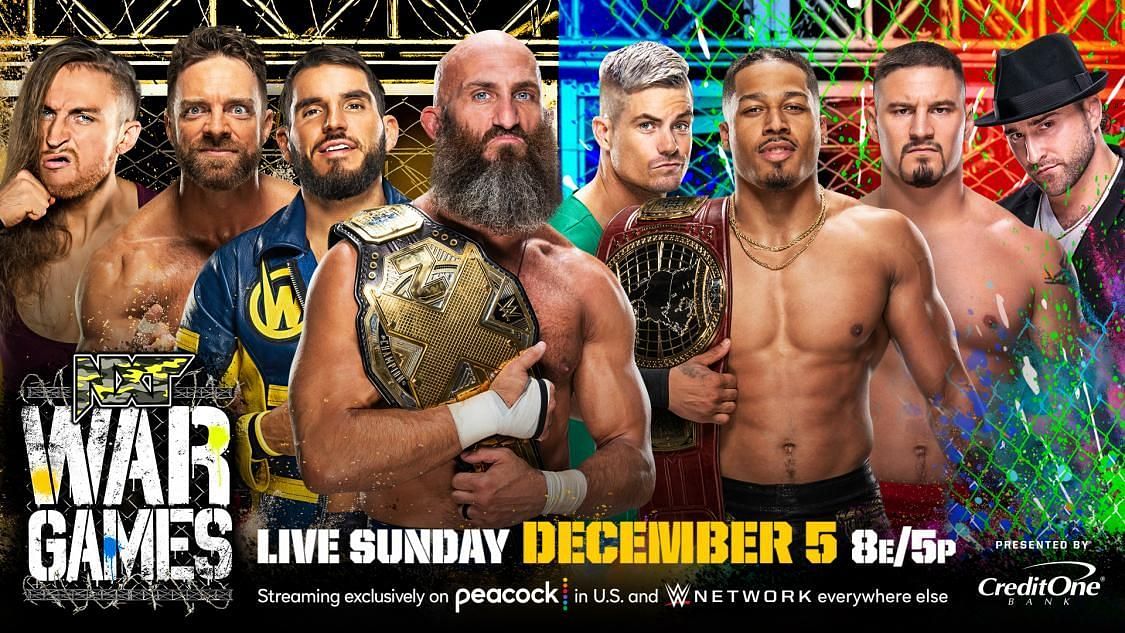 5 potential finishes to the men’s match at NXT TakeOver: WarGames 2021

NXT TakeOver: WarGames 2021 is projected to be one of the biggest pay-per-views of the year. Many fans believe the eponymous matches are the highlight of the brand’s annual events.

The women’s match will see Team Raquel take on Team Kai in a grudge match. On the men’s side, the newcomers of NXT will take on the veterans of the brand in a battle of supremacy.

The brand has recently gone through a revamp, and it will be tough for the NXT creative to award a clean victory to either team. However, the result of the match could change the entire landscape of the brand and lead it into a new era.

Fans could end up seeing some underhanded tactics by both teams to gain an unfair advantage on Sunday night. With that being said, let’s look at the five possible ways the match between Team Black and Gold and Team 2.0 could end at TakeOver: WarGames.

On the go-home episode of WWE NXT before TakeOver: WarGames, Bron Breakker won an advantage during a ladder match against Johnny Gargano. Team 2.0 will be the heels on Sunday, giving them a license to do whatever they want during the match.

Breakker’s team could utilize the advantage to take out a member of Team Black-and-Gold early in the match before heading to the cage. Undisputed ERA has used this tactic in the past, and Team 2.0 could do the same this year.

Grayson Waller could come out of the cage as the second man for his team to attack the LA Knights and take him out of competition. His attack could earn Team 2.0 an even bigger advantage as they could win the match.

It will be the perfect way to hand the veterans of NXT a loss without denting their value. Ciampa and his men cannot afford a clean loss to the newcomers. Putting them at a disadvantage on Sunday will somewhat protect them.

LA Knight is the newest superstar of Team Black and Gold for NXT TakeOver: WarGames. Many fans wanted to see Kyle O’Reilly or Dexter Lumis in his place, but Knight could put on an incredible performance on Sunday.

However, he is the only superstar in Team Black and Gold without a major title. WWE could look to put him down to put the new guys of NXT 2.0 over at TakeOver: WarGames.

Bron Breakker could deliver the final Military Press power slam to Knight and pin him to pick up the win. The ending will protect Tommaso Ciampa, Johnny Gargano, and Pete Dunne from taking the fall.

The rivalry between Carmelo Hayes and Johnny Gargano has developed nicely in the weeks heading into WWE NXT TakeOver: WarGames. The two men will likely look to take each other out during their match to make a statement.

There has been speculation that Gargano will not be re-signing with the company. However, if he decides to stick around, NXT could use him to silence the rumors.

Johnny Wrestling could hit the Final Beat to Melo to win the match for Team Black and Gold. The finish will give Gargano another chance to challenge Hayes for the NXT North American Championship.

After the match Carmelo Hayes & Trick Williams come out and attack Dexter. They target his arm with a Steel Chair but Johnny Gargano chases them off. #WWENXT 🟡

After the match Carmelo Hayes & Trick Williams come out and attack Dexter. They target his arm with a Steel Chair but Johnny Gargano chases them off. #WWENXT 🟡 https://t.co/iKEjGMEDZr

On the final episode of WWE NXT before TakeOver: WarGames, Indi Hartwell got the news that Dexter Lumis had broken out of the hospital. A few weeks ago, Carmelo Hayes and Trick Williams injured his hand.

The Tortured Artist will be coming back for revenge soon, and he could be back on Sunday. Lumis could show up during the WarGames match when Team Black and Gold is down and out. He could force his way into the cage and take out Hayes to weaken Team 2.0.

His actions could allow Tommaso Ciampa and his men to take advantage and pick up the win. The result will protect Team NXT 2.0 from a clean loss while keeping veterans of the brand on the top.

The spotlight will be on Bron Breakker and Tommaso Ciampa at NXT TakeOver: WarGames. Both men will be leading their respective sides during the titular match on Sunday night.

Breakker was unsuccessful during his first shot at the NXT Championship. He could turn things around and earn another shot by scoring the final pin at WarGames.

On Sunday night, Breakker must hit the Military Press power slam to The Blackheart and pin him to pick up the win for Team 2.0. A victory would allow Breakker to shoot back into the NXT Championship picture with ease.