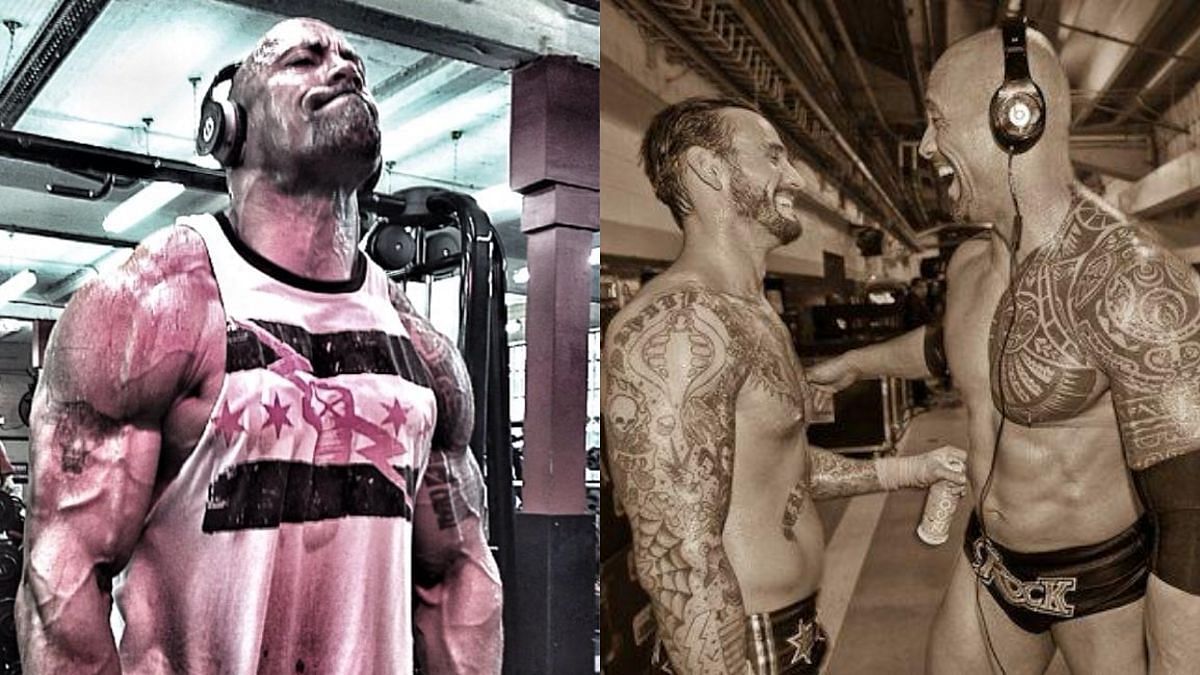 5 friends of Dwayne ‘The Rock’ Johnson in AEW

AEW has pulled in a few WWE legends over the past couple of years. Dwayne ‘The Rock’ Johnson is one superstar the company most likely has its eyes on at all times.

The Rock is one of the biggest names in the entertainment industry today. His star power is unlike any other, and one appearance from him could spike a company’s ratings to new heights. Even if The Great One appears in AEW for a short promo, it will help solidify the promotion as one of the top ones in the industry.

AEW has a few top names who are good friends with The Rock behind the scenes. The Great One’s inner circle’s bonds could bring him to the company in the future.

With that being said, take a look at the five AEW stars who are friends with Dwayne ‘The Rock’ Johnson in real-life. 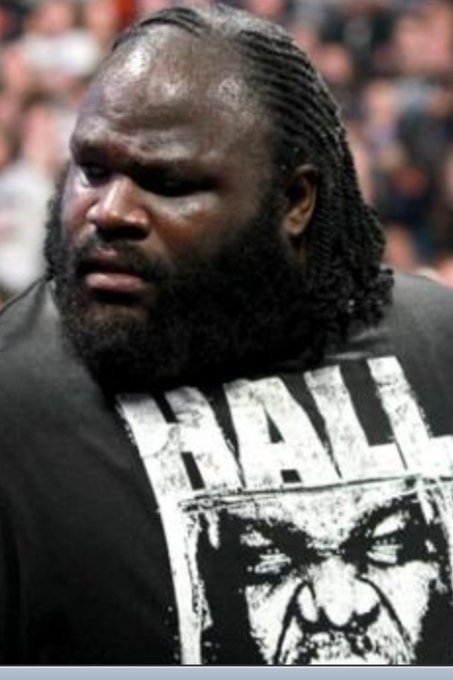 It’s no secret that AEW star Mark Henry is one of Dwayne ‘The Rock’ Johnson’s closest friends. He has praised Johnson whenever he’s got a chance and looked out for him early in his career.

The Rock didn’t have any money or a place to stay when he first came into WWE. Henry was kind enough to offer him a place to stay and helped him out in his early years. In an interview, the now-AEW star opened up about looking out for The Rock early on.

“When he came here [WWE], he didn’t have two nickels to rub together. I had an apartment in Stamford and I told him like ‘Man, I got extra room in my apartment, you can just move in with me.’ He was like ‘Man, I don’t have no money to pay you,’ but I was like ‘look, you’re going to get some money, don’t worry about it. Pay me back when you get it,’” Henry said

The two started getting very close together, and The Rock used to help Henry get up for work and train with him. They also worked together on-screen and were prominent in the Nation of Domination.

“We got along real good [as roommates] because he put his headphones on when he went to sleep, then knock on my door – because I didn’t use to set an alarm,” Henry added.

The two men have remained friends ever since their early years. Henry is now a commentator on AEW and could influence Dwayne ‘The Rock’ Johnson to appear on the promotion someday.

AEW star Cody Rhodes has made some influential friends during his career, including Dwayne ‘The Rock’ Johnson.

The Rock was pretty close to Cody’s father, Dusty Rhodes. This helped the two men form a bond while they were in WWE. After AEW made it big thanks to Cody’s hard work, Johnson praised him and the new promotion.

In an Instagram Live session, The Rock accepted that he watches AEW and likes the competition that has been created.

“Do I watch AEW? Yeah, I watch AEW—of course I do. I’m very happy for the success of that company, because it’s always a good thing and it creates a hunger, which is good,” The Rock said.

Congrats my friend. So f’n cool!
That’s some real legacy and history you’re now a part of. Proud of you. Your pops is lookin’ down and smilin’ BIG!
#10LbsOfGold #NWAHeavyweightChamp twitter.com/CodyRhodes/sta…

The Rock has also praised Cody’s work on the mic and in the ring. The two men have had some pleasant exchanges on Twitter. It shows that they are always thinking about each other even though they are working in different fields. 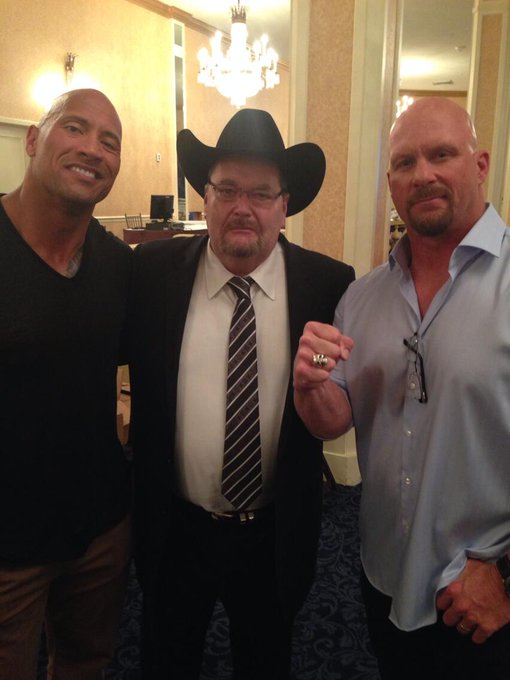 AEW commentator Jim Ross and Dwayne ‘The Rock’ Johnson spent some time together in WWE. The two men worked together in different capacities for a long time before The Rock moved on to acting.

In March 2017, Ross’s wife met with an accident that led to her demise. This loss shook JR. Several friends and fans reached out to the AEW commentator to show their support.

In an interview with Inside the Ropes, Ross recalled when The Rock called him in the middle of the night while he was in the hospital with his wife. The AEW star said that the WWE legend was in Europe filming a movie but decided to call his old friend to offer his condolences.

“He was somewhere in Europe taping or filming a movie the day my wife got killed. I was at the hospital sitting with her, she was on life support. Her family had not had time to fly in from California yet. So my phone rings and it’s Dwayne. So it’s like, I don’t know what time it was where he was, it’s like the middle of the night where I was. It just shows he’s not too big to reach out to an old friend and offer the condolences.” JR said.

JR also noted that no amount of money could change who The Rock is inside, calling him one of the industry’s most sincere and caring athletes. It’s good to know that the WWE legend and the AEW commentator are still close to each other.

@WWE Champion @CMPunk I know where to find you Phillip. And I will.. #Rumble2013 http://t.co/w2vQzWFQ 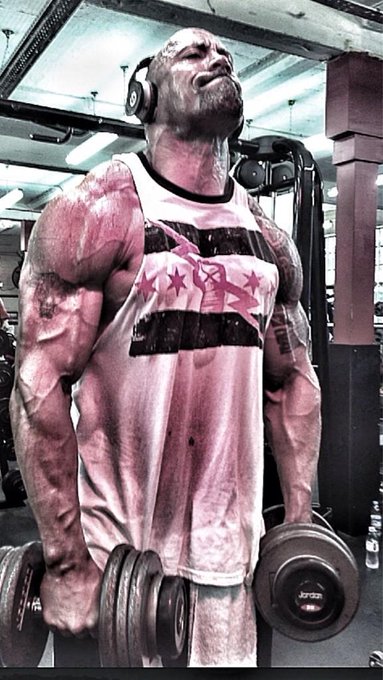 @WWE Champion @CMPunk I know where to find you Phillip. And I will.. #Rumble2013 http://t.co/w2vQzWFQ

Initially, AEW star CM Punk and Dwayne ‘The Rock’ Johnson had trouble getting on the same page in WWE. The two men had a rivalry in 2013 that saw them trading insults on the mic.

Behind the scenes, it looks like the two men became close friends. The Rock even called the AEW star on the phone during an off-air segment in WWE where fans were chanting for The Best in the World.

The AEW star later spoke about missing The Rock’s call and figuring out what was going on.

“I was in the elevator, going to the bottom floor to walk Larry. I was in the elevator, no reception in the elevator. My phone, no messages, I get in the elevator, it’s really slow, by the time it gets down and I walk out and I have 87 messages on my phone. I think somebody is dead! I had no idea what was going on until I’m done with the walk, ‘Oh, Rock is calling me, live from the Staples Center, okay. I started texting him immediately after that, he got right back to me like, I’m like, ‘Oh, brother! I was trying to answer, I was outside, I was in an elevator.’ It just didn’t work out.” CM Punk said.

I work off instinct, always listen to the people and try to give em something special. Huge positive feedback from @WWE Universe. Fun night twitter.com/bardown/status…

After Raw went off air, @TheRock called @CMPunk from the ring and left him an awesome message. VIDEO@ bardown.com/after-raw-went… 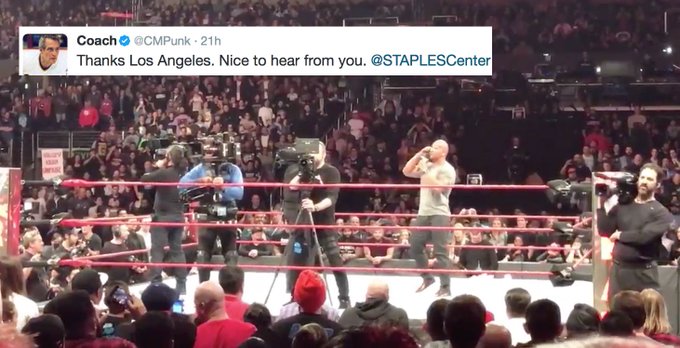 After Raw went off air, @TheRock called @CMPunk from the ring and left him an awesome message. VIDEO@ bardown.com/after-raw-went… https://t.co/YihwCHAkwM

I work off instinct, always listen to the people and try to give em something special. Huge positive feedback from @WWE Universe. Fun night twitter.com/bardown/status…

It’s good to know that the two men have buried the hatchet and are pretty close together in real-life. They are among the top stars in the industry and have done well in their respective fields over the past decade. Will they meet once again in AEW?

This means a lot, thank you brother for these words. You’re one of the GOATS and man the fun we had electrifying the millions around the world.
What an honor.
And I still owe you a receipt for that tobacco spit incident 🤢🤣 twitter.com/IAmJericho/sta…

Going down the @YouTube rabbit hole tonight and one thing is clear….he may be the biggest box office draw in Hollywood today, but my goodness, let’s not ever forget how GREAT @TheRock was in the ring. One of the best ever …

This means a lot, thank you brother for these words. You’re one of the GOATS and man the fun we had electrifying the millions around the world.
What an honor.
And I still owe you a receipt for that tobacco spit incident 🤢🤣 twitter.com/IAmJericho/sta…

Arguably the biggest moment of AEW star Chris Jericho’s career came in 199 when he debuted in WWE by interrupting Dwayne ‘The Rock’ Johnson.

Since then, Jericho has become a household name in the sports entertainment industry and had a good run in WWE and AEW. Y2J and The Rock had some memorable rivalries on-screen during their time together.

Outside the ring, the two men are good friends. In an Instagram video, The Rock recalled when he headlined a show in Hawaii with ‘Le Champion.’

“We went to Hawaii, and I wrestled a guy by the name of Chris Jericho, a very good buddy of mine today, and I gotta tell you guys, I’ve had the honor and the privilege. I’ve been a lucky son of a b–ch to have the career that I’ve had in professional wrestling. I’ve wrestled around the world in very major arena in this country, every major arena around the world, and the most meaningful match I’ve ever had was to go back to Hawaii at the Blaisdell Center in the main event. Sold it out by the way. Faster than Elvis did. I’m just saying,” said The Rock

The Rock and Jericho have managed to stay friends even though they’re far from WWE now. Y2J will likely retire in AEW, while The Rock might only return for a few WWE matches before hanging up his boots.