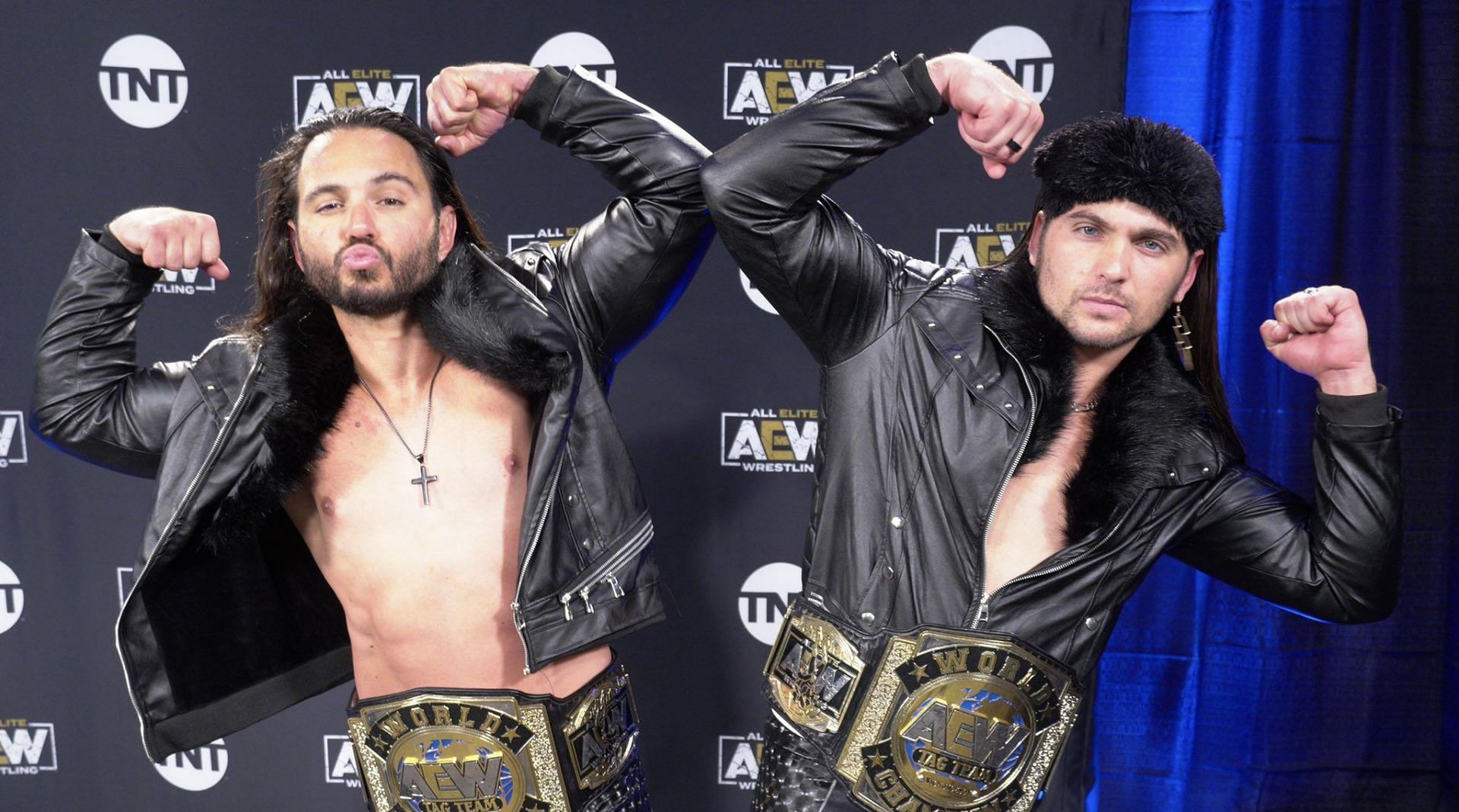 5 dream matches for The Young Bucks in WWE

The Young Bucks occupy the top of the mountain when it comes to tag team wrestling, and you’ll be hard-pressed to find a better tandem out there. Throughout the past decade, they have toured the world facing the best competition and collecting championships wherever they go. They went on to co-orchestrate the landscape-changing All In event, which served as the spiritual pilot for AEW. 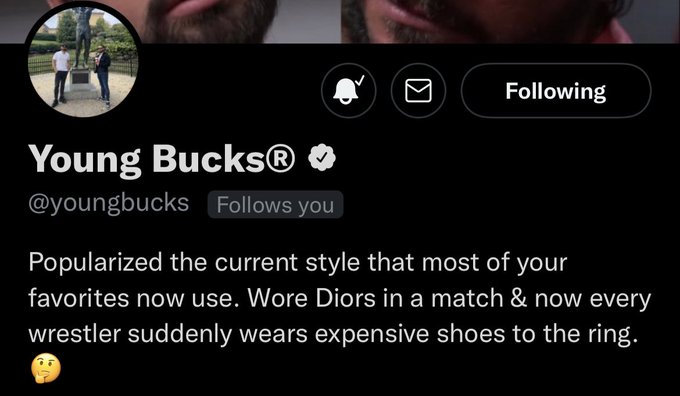 The Young Bucks have reached the peak of their careers in AEW thus far, capturing the prestigious AEW World Tag Team Championship titles from FTR and reigning as the longest defending champions in the titles’ history.

They have been integral to the success of AEW since its birth and have featured in some of the most prominent and high-stakes storylines, as part of The Elite faction with Kenny Omega.

When it comes to the best of the best, fans will forever speculate about the unknown and what appears to be out of reach for The Young Bucks. The Jackson brothers have built such an expansive back catalogue of classics that they carry a sense of expectation whenever they are on-screen. The Young Bucks make a lot of noise wherever they are and whoever they lock horns with.

Unfortunately, the solo operation of WWE leaves a set of the best tag teams unavailable to occupy the “Player 2” spot for The Young Bucks; let’s take a look at the best five tag teams in WWE that fans can only dream of standing opposite The Bucks.

#5 The Young Bucks vs. The Street Profits

The Street Profits are a rare example of an NXT call-up done right, the former NXT Tag Team Champions have reigned with both the SmackDown and RAW Tag Titles and remain a cornerstone fixture of the RAW tag team division.

When it comes to WWE, the tag division often finds itself in a state of flux with no teams given concrete assurance that they won’t find themselves split for some reason or another, and as a consequence of this the more tenured and seasoned teams often exemplify the standard expected of a championship winning team. The combination of Angelo Dawkins’ amazing strength and Montez Ford’s supernatural agility make for an interesting dynamic which allows them to click with a wide variety of teams.

The Street profits and The Young Bucks share the fact that they are both remarkable tag teams that understand the craft and offer it the respect it deserves, but what complements their style is their ability to not only present themselves well, but they make their opponents look golden too.

When two tag teams of this type come together in any case there isn’t much room left when it comes to quality, it is either good or really good, and there is no compromise.

We can only hope that one day the stars align and The Street Profits and The Young Bucks come face-to-face.

#4 The Young Bucks vs. The New Day

Did you know The Young Bucks and The New Day battled each other outside of wrestling?

While The Young Bucks cemented themselves as tag wrestling stalwarts on the independent scene, the trio of Big E, Kofi Kingston and Xavier Woods made the most of their last chance when The New Day was founded in 2014. The creation of the faction helped to completely rejuvenate their careers.

The New Day can now look back on a run that has gifted them with accolades and honors, such as the WWE Tag Team Championship, which they held on many occasions. Kofi Kingston has since won the WWE Championship at WrestleMania, Big E won and cashed in the Money In The Bank contract to capture his first WWE Title reign, and Xavier Woods has since been crowned King of the Ring.

With New Day, they don’t just represent a tag team, they are a collective of champions that compete for the top gold.

The way New Day operates makes them a perfect fit with plenty of top tag teams. With the freedom of being able to work with a trio instead of a pair, The Young Bucks vs. New Day could consist of Matt and Nick vs. Woods and Kingston, Woods and Big E or Kingston and Big E. These possibilities offer up something unique for each potential bout.

Unless a forbidden door finds itself ajar, or we see an exodus of talent either way, New Day vs. The Young Bucks remains an impossible fantasy, both tragic and tantalizing for all of the potential possessed.

#3 The Young Bucks vs. The Bar

Who will Step Up To #TheBar at #WrestleMania34?

The Greatest Tag Team on Earth has NO worthy opponents on The Grandest Stage of Them All.

This is an Open Invitation…

Who will Step Up To #TheBar at #WrestleMania34?

The Greatest Tag Team on Earth has NO worthy opponents on The Grandest Stage of Them All.

This is an Open Invitation…

The Bar can easily find themselves lost in the shuffle when describing the greatest tag teams of recent history. Cesaro and Sheamus found themselves thrust into a marriage of convenience when RAW General Manager Mick Foley found a loophole in their Best of Seven Series for a title opportunity, in a very different story to the formation of The Young Bucks.

Instead of either man going for the US or Universal titles on RAW, they would conclude the series in a stalemate and receive an opportunity at the tag titles.

Sheamus and Cesaro are both insanely talented in-ring performers, and while The Celtic Warrior has captured world titles and can look back at a fruitful WWE spell, the tale of The Swiss Cyborg is of immense talent finding itself at the end of bizarre booking.

They meshed well as a team, and had classics with established tag teams like the Good Brothers, FTR (at the time known as The Revival), The New Day and The SHIELD.

Together they conquered the tag division, holding both the SmackDown and RAW Tag Team Championship titles, and quickly became a duo called upon by WWE whenever a top tag team was needed for an important storyline.

The Bar’s growth to their position was organic and nothing felt forced, with both Sheamus and Cesaro loved by the WWE Universe.

The Young Bucks and The Bar share very different origins, with Cesaro and Sheamus having to build their bond through wrestling together after spending time as foes, Matt and Nick have always stood together. A clash between the two teams would be a tale of nature vs. nurture.

If The Young Bucks were to find their way into the WWE tag division, a program with The Bar, whether one-off or long-term, would serve well to highlight the very best of the four involved.

#2 The Young Bucks vs. AJ Styles and Omos

The Young Bucks in WWE is a pipe dream for the unfortunate fact that WWE doesn’t appear to have a vested interest in the tag team aspect of wrestling. While WWE has a strained relationship with tag team wrestling, they on occasion stumble onto gold when pursuing “the next best thing.”

Omos, and in particular his pairing with AJ Styles, has been a highlight of RAW TV in 2021.

AJ Styles really needs no introduction or tagline, his name speaks for itself when it comes to wrestling pedigree and it feels very much like there isn’t a promotion out there that the Phenomenal One hasn’t found success. While Omos is the younger star of the duo, seemingly destined for great things in WWE, Styles has history with The Young Bucks stemming from his time in New Japan.

Styles led The Bullet Club faction The Young Bucks were a part of, and eventually found himself at the end of a betrayal from the Jacksons and Kenny Omega when The Cleaner usurped him. That would serve as the storyline foundation for Styles and Omos vs. The Young Bucks. Styles has his personal colossus in Omos and can seek a measure of vengeance against those who wronged him before.

#1 The Young Bucks vs. The Usos

Death to the > tweets. 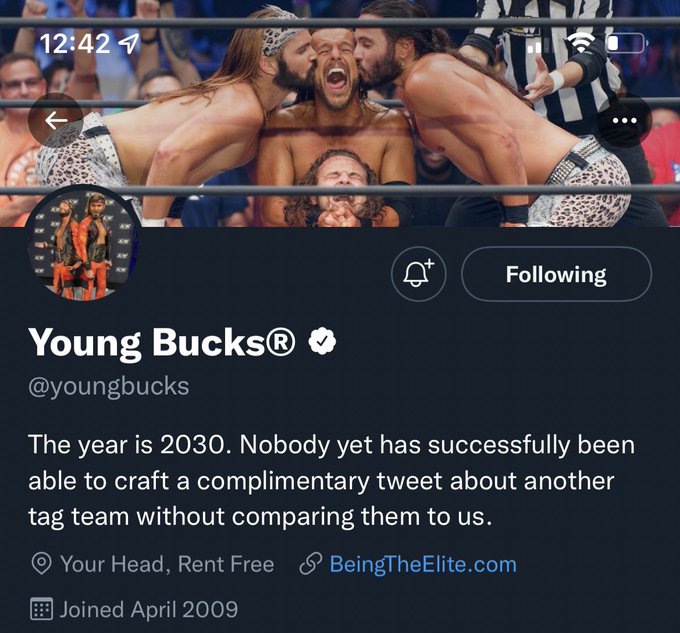 Any other pick for number one on this list would have been incorrect.

The mere prospect of a Usos and Bucks clash will forever be absolute dynamite for the parallels they share, as well as the immense wrestling talent possessed by the brother duos.

Both The Usos and The Young Bucks have been part of dominant factions where they have served as the tag team enforcers, with the former serving in The Bloodline trio led by Roman Reigns and the latter a part of the Bullet Club stable in New Japan and The Elite faction in AEW.

For all of the parallels between the two, the number one reason for any dream match between the two sits at the core of wrestling, they are both highly regarded by fans as the best tag teams in the world and have an obligation to their craft to settle the debate.

The Young Bucks to WWE would be a move wasted and a dream unfulfilled if they were never given the chance to stand opposite Jimmy and Jey Uso; the idea of The Young Bucks in WWE is only exciting for the dream matches that would be unlocked, take the Usos off the list, and the excitement is deflated.

It’s a testament to the two teams that the fact they may never come to blows is a point of fear for wrestling fans.