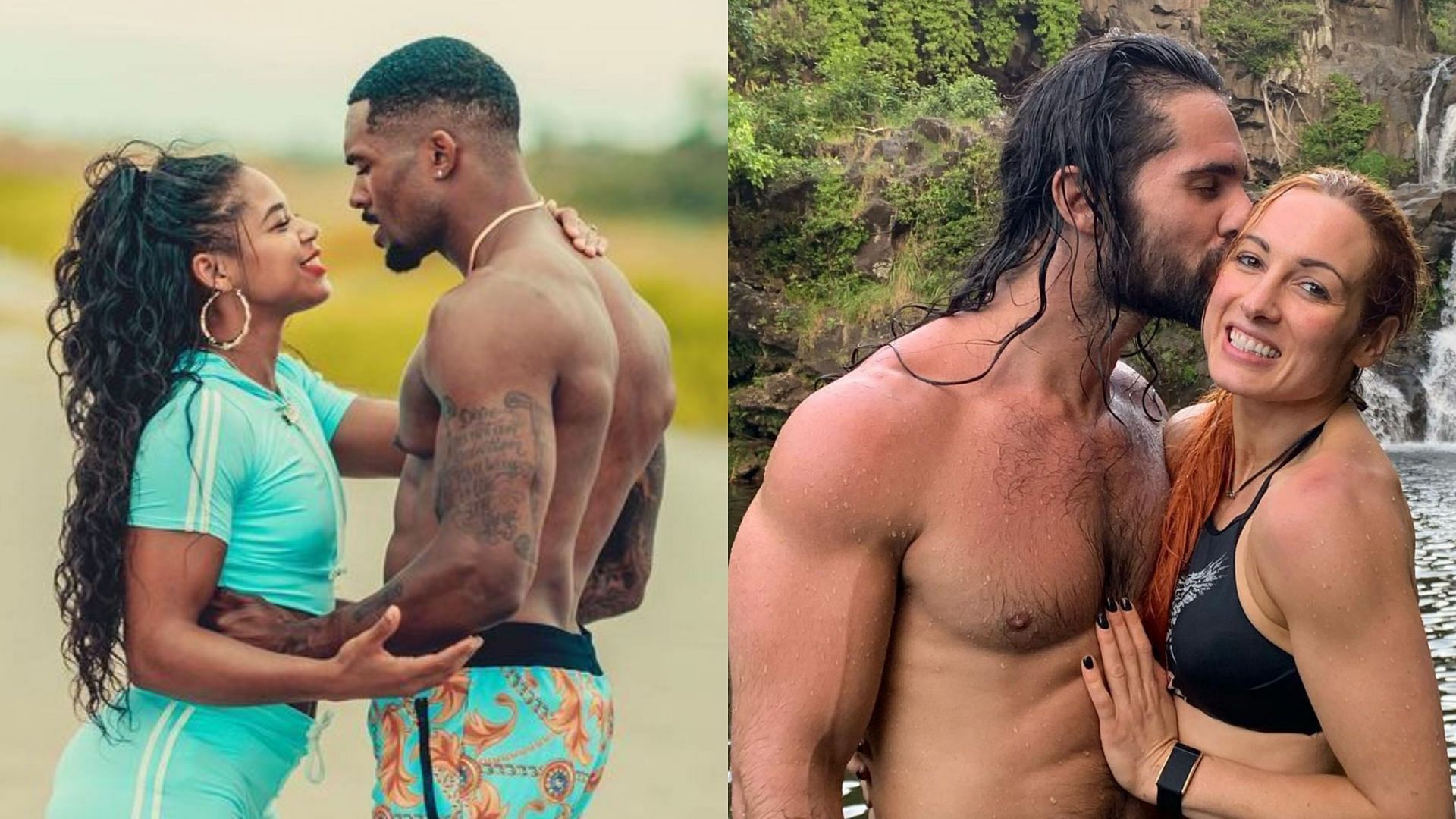 After the release of several WWE Superstars over the past two years, there are only a few real-life couples left on the main roster.

WWE have had many real-life couples in the past few years, including Charlotte Flair & Andrade El Idolo and Malakai Black & Zelina Vega. Nonetheless, the company has let go of several superstars splitting real-life couples. While Flair and Vega are still in WWE at the moment, their partners have both joined AEW.

A few other couples are more fortunate so far as they are both still working together in WWE. However, the number of real-life couples on the WWE main roster has declined drastically over the past 24 months. Today, only a few remain.

Becky Lynch and Seth Rollins are among the few remaining real-life couples on the WWE main roster. The two WWE Superstars are active on Monday Night RAW, where Lynch holds the women’s championship. Big Time Becks’ husband could also become champion soon as he is now the number one contender for Big E’s WWE Title.

Lynch and Rollins’ relationship kicked off in early 2019. They dated for several months before announcing their engagement in August that same year. On the May 11, 2020, episode of Monday Night RAW, The Man revealed that she was pregnant. She gave birth to her and Rollins’ daughter, Roux, last December. The couple then tied the knot last June.

Both Lynch and Rollins recently competed at the Survivor Series pay-per-view. The RAW Women’s Champion went head-to-head with her SmackDown counterpart Charlotte Flair and came out victorious. Meanwhile, The Visionary led Team RAW to victory over Team SmackDown in the 5-on-5 men’s Survivor Series elimination match.

Last Monday, Rollins was involved in an incident where a fan jumped the barricade and attacked him.

Bianca Belair and Montez Ford are another couple currently on Monday Night RAW. The two WWE Superstars met during their time in NXT. In June 2017, the couple announced their engagement. They tied the knot a year later.

Ford was the first to move from NXT to the main roster. He and his Street Profits partner Angelo Dawkins joined Monday Night RAW in the 2019 WWE draft. A few months later, they won the RAW Tag Team Championship.

In the 2020 WWE Draft, the couple moved to SmackDown, where they both had a lot of success, including Belair becoming SmackDown Women’s Champion. Nonetheless, she lost her title to Becky Lynch at SummerSlam.

Belair and Ford recently returned to RAW in the 2021 WWE Draft. Since returning to the Red Brand, The EST of WWE had a few shots at the RAW Women’s Title but came up short.

The WWE Women’s Tag Team Champion Carmella is another Monday Night RAW superstar on this list. Although her fiancé, Corey Graves, is not an active wrestler, he is on WWE’s main roster as a color commentator and analyst on the Red Brand.

Carmella and Graves started dating in early 2019. Their relationship was surrounded by controversy as Graves was still going through his divorce proceedings when they began dating.

Some fans even called the former SmackDown Women’s Champion a homewrecker. The 34-year-old addressed these accusations on an episode of Total Divas.

“I didn’t do anything wrong. I know in my heart I didn’t break up a family. I would never do something like that. I just don’t like that now the entire world thinks I did this horrible thing,” she told Sonya Deville.

The couple have been together for nearly two years now. A few weeks ago, they announced their engagement. As things are going well outside the ring for Carmella, her career inside the squared circle is currently thriving too.

Naomi and Jimmy Uso are currently the only remaining real-life couple on the WWE SmackDown roster. The two wrestlers first met in WWE. They dated for a year before getting married in 2014. Uso and Naomi’s life was featured heavily on WWE’s reality show Total Divas.

The couple have worked together several times on-screen. A few years ago, they were involved in a storyline with Mandy Rose. The two WWE Superstars have also competed together in the ring a few times. They participated as a team in the two seasons of the WWE Mixed Match Challenge. The couple also joined forces in several matches on Monday Night RAW and SmackDown.

Jimmy Uso is currently part of The Bloodline, alongside his brother Jey and his cousin Roman Reigns, the WWE Universal Champion. The Usos recently lost to RK-Bro at Survivor Series.

Meanwhile, Naomi recently joined SmackDown coming from RAW. The 33-year-old is currently engaged in a feud with WWE official Sonya Deville. Since joining the Blue Brand, the former SmackDown Women’s Champion has competed in five matches. She won only one bout and lost the other four. Naomi was also not part of SmackDown’s team in the 5-on-5 women’s Survivor Series elimination match.

Triple H and Stephanie McMahon are probably the most famous couple in WWE history. The Game began his relationship with Vince McMahon’s daughter in 2000. After dating for three years, the couple tied the knot in October 2003.

In the past two decades, Triple H and McMahon have worked together many times on-screen. The last time they competed as a team came three years ago at WrestleMania 34. They competed against WWE Hall of Famer Kurt Angle and Ronda Rousey but suffered defeat.

While McMahon has not competed in the past three years, The Game squared off against Randy Orton in a Street Fight match last January. The Viper defeated The Cerebral Assassin.

Triple H and Stephanie also hold executive positions in WWE. The King of Kings is currently the Executive Vice President of Global Talent Strategy & Development and the Executive Producer of NXT. Meanwhile, The Billion Dollar Princess is the Chief Brand Officer.

Although they are not currently active in-ring competitors, the couple remains part of the WWE main roster. Their daughter, Aurora Rose Levesque, could even join them in a few years as she has already started training to become a pro wrestler.