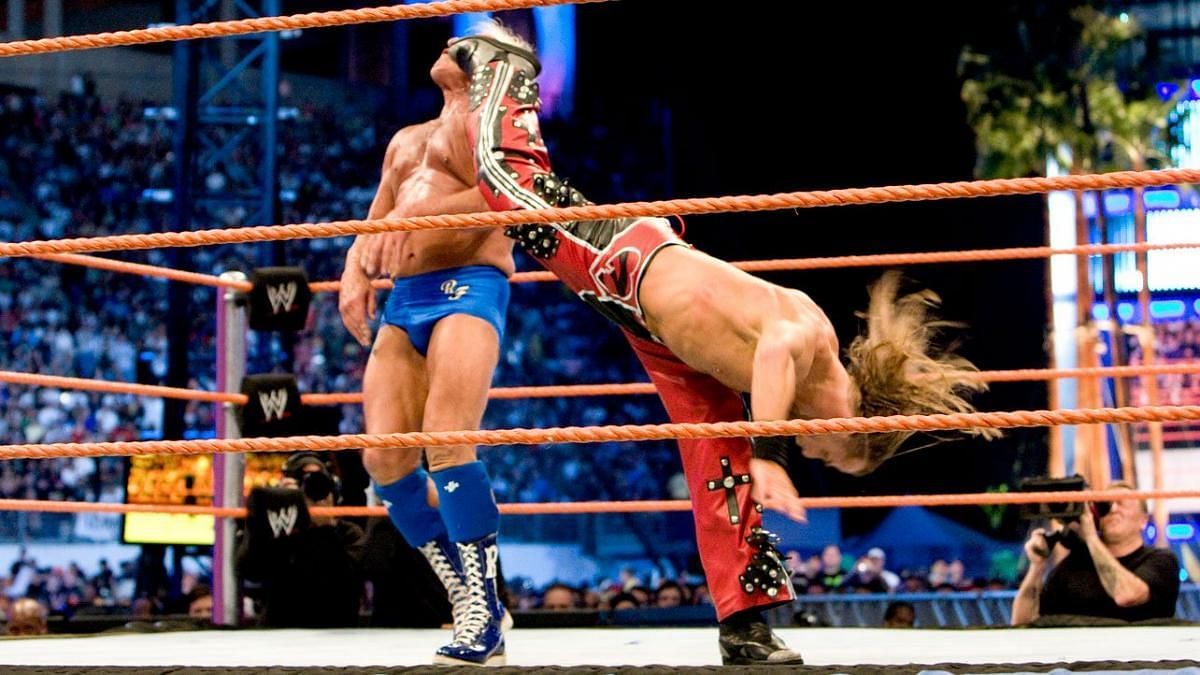 Many WWE Hall of Famers have wrestled with their immorality in figuring out the right time to call it quits. Retirement is never easy for a professional wrestler. These competitors have battled in many different stipulations, whether it be inside a steel cage or in the high-risk element of a ladder match. However, there may not be a more feared match type than a retirement match.

Sometimes, it could be due to a bitter rivalry or for a superstar that is winding down their time inside the squared circle. WWE has presented quite a few stellar retirement matches that usually take place either on pay-per-view or even at The Grandest Stage of Them All, WrestleMania.

There have also been some duds under this stipulation, like Kurt Angle vs. Baron Corbin or Triple H vs. Batista at WrestleMania 35. However, the quality of the better bouts supercedes all of this. In this article, let’s take a look at the five best retirement matches in WWE history.

#5. Lita vs. Trish Stratus for the WWE Women’s Championship (Unforgiven 2006)

another unbelievable match. these two always put on a fantastic show! if cena vs edge wasn’t the main event these two could’ve easily taken that spot! 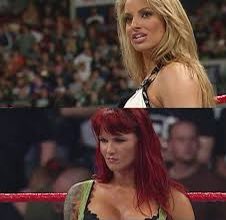 another unbelievable match. these two always put on a fantastic show! if cena vs edge wasn’t the main event these two could’ve easily taken that spot! https://t.co/BhuyldklZH

WWE has seen a renaissance in their women’s division over the past few years. The Divas era outstayed their welcome and in came a surplus of talented women who wanted to be known for their in-ring skills over their looks. Prior to the “Women’s Revolution” as it would be coined, the feud between Trish Stratus and Lita broke norms and delivered quality on a consistent basis.

By 2006, Stratus had accomplished so much in her career. She was a six-time WWE Women’s Champion and stood as the face of the division for the past five years. She finally wanted to retire and was looking to finish on top by winning the gold one more time. The stage was set for Unforgiven 2006 where Trish faced the reigning champion and arch-rival, Lita.

The pay-per-view took place in Toronto, Ontario, Canada, which is the hometown of Trish Stratus. This added to the emotion in this match. These two women had become superstars and legendary figures in women’s wrestling opposite one another. The first women’s main event on RAW and countless battles went into this one evening at Unforgiven 2006.

The hometown hero pulled another Canadian legend, Bret “The Hitman” Hart’s Sharpshooter, to submit Lita and win her record-breaking seventh WWE Women’s Championship. The post-match celebration showed how much this night meant to Stratus. It was an epic encounter that felt important and left a lasting memory that fans will never forget.

Ric Flair was at the tail end of his career when he returned to WWE in 2007. Vince McMahon put down the stipulation that when Flair lost his next match, he would have to retire. This led to months of the 16-time world champion overcoming Career Threatening Matches against the likes of MVP and Mr. Kennedy. When WrestleMania season came, he wanted his biggest challenge yet.

Flair challenged a man who looked up to The Nature Boy and was synonymous with WrestleMania, Shawn Michaels. HBK was hesitant, but he eventually accepted. The two put on a memorable encounter at WrestleMania 24. It was emotional and grueling. The ending saw Michaels say the iconic words, “I’m sorry, I love you”, before hitting Sweet Chin Music for the win.

Who’s ring gear was a more on point for WrestleMania VII? “Macho King” Randy Savage? Or The Ultimate Warrior? I think Savage looked absolutely classic here! What do u guys say?🤔 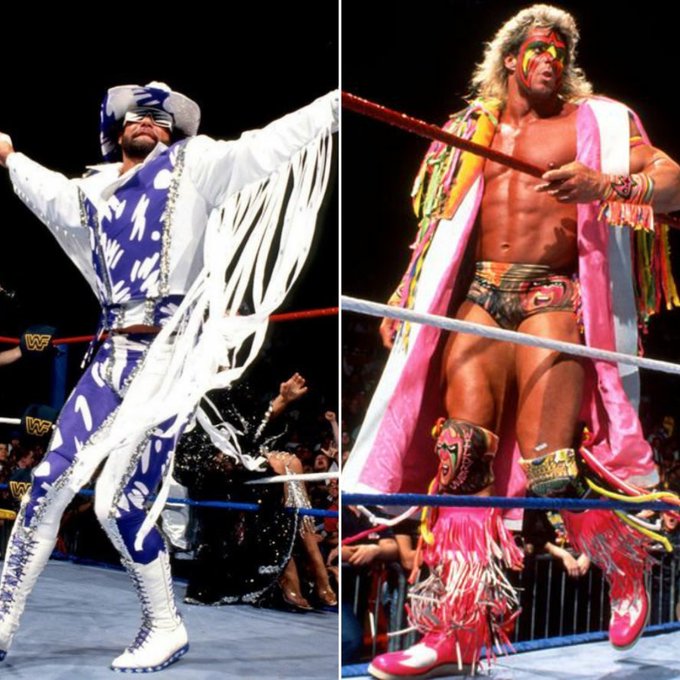 Who’s ring gear was a more on point for WrestleMania VII? “Macho King” Randy Savage? Or The Ultimate Warrior? I think Savage looked absolutely classic here! What do u guys say?🤔

The rivalry between The Ultimate Warrior and Macho Man Randy Savage spanned months and centered on Savage wanting a shot at the WWE Championship. He eventually cost Warrior the title at the Royal Rumble 1991, helping Sgt. Slaughter claim the gold. This led to Warrior vs. Savage with the added stipulation of a retirement match to finally settle the score.

The Ultimate Warrior and Macho Man Randy Savage fought tooth and nail to survive this battle and walk away with the victory. It was physical destruction by both men. Savage looked on the brink of victory after four straight flying elbow drops, but Warrior kicked out, made a comeback and beat him with a running shoulder block to continue his career in the company.

This show one of the finest things I have ever been part of. Thank you @TripleH & @StephMcMahon for making history with me in 2000 – and for remembering it so fondly 20 years later. 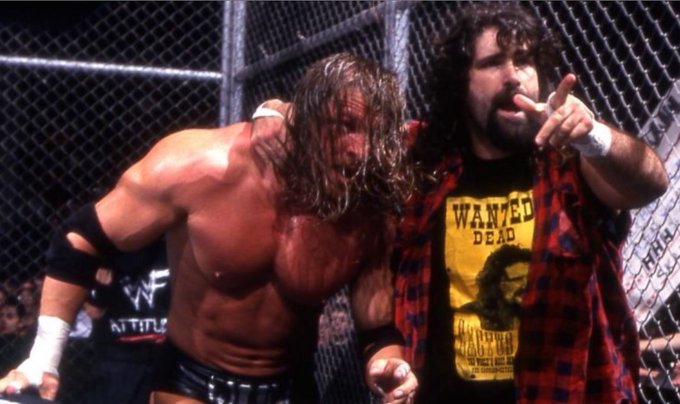 This show one of the finest things I have ever been part of. Thank you @TripleH & @StephMcMahon for making history with me in 2000 – and for remembering it so fondly 20 years later. https://t.co/xSLd1twZkh

2000 was arguably WWE’s most successful year ever. The company had so much momentum and had already clearly won the Monday Night Wars with WCW. They were doing marvelous in ratings, pay-per-view buyrates and merchandise. To kick off the year, Triple H was the centerpiece of the main event scene and won the WWE Championship.

He made all of the babyfaces’ lives a living hell, especially Mankind. The McMahon-Helmsley Regime, headed up by The Game and Stephanie McMahon fired Mankind before The Rock organized a protest to allow them to re-hire his former tag team partner. Mankind also received a WWE Championship Match against Triple H at the Royal Rumble 2000 as well.

This became a street fight and is fondly remembered as one of the greatest WWE Championship matches of all time. The two men fought all over New York City’s Madison Square Garden. They bled and brutalized one another in an effort to walk out with the gold. Mankind, under his Cactus Jack persona, was in top form, while Triple H put on a star-making performance.

The Cerebral Assassin got the win there and wanted to finally end things for good the following month at No Way Out 2000. Not only was it made a Hell In A Cell Match, but Cactus Jack put his career on the line for one last bout against his bitter rival. The intensity was extremely high going in and both men lived up to the lofty expectations going in.

The two put on a phenomenal Hell In A Cell Match that escalated in drama as the match went on. The hatred between these two was palpable and was arguably one of the best matches of a banner year for the company. Triple H retained the WWE Championship once again after backdropping Foley through the roof of the cell and the ring.

#1. Shawn Michaels vs. The Undertaker in a Career vs. Streak Match (WWE WrestleMania 26)

One of the most memorable match in Undertaker streak and whole WWE. Awesome story, high drama and great skills in ring, one of my favourite match ever, also very sad moment for HBK fans, because he had to retire after this 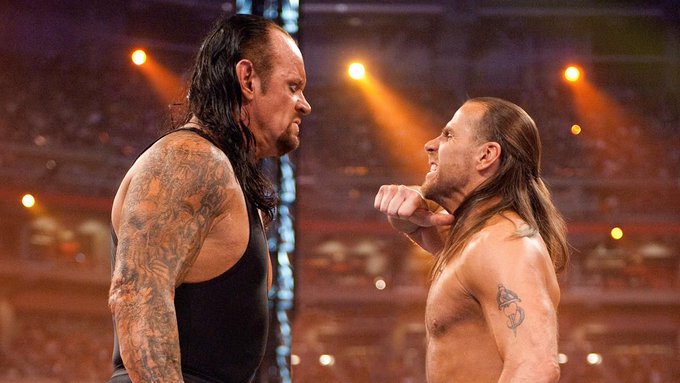 One of the most memorable match in Undertaker streak and whole WWE. Awesome story, high drama and great skills in ring, one of my favourite match ever, also very sad moment for HBK fans, because he had to retire after this https://t.co/e5R2dxEtB7

Shawn Michaels carried the end of Ric Flair’s career with him for the years to follow. It was the driving force behind so many of his feuds and became a battle for him to clear his conscience. At WrestleMania 25, Shawn Michaels looked for the ultimate redemption in his mind. He faced The Undertaker and wanted to be the man to break the Streak.

It was an excellent bout that exceeded all the hype and is widely considered the greatest WrestleMania match of all time. It just might be the best WWE match ever. The loss for Michaels here drove him to insanity in wanting to get another chance against The Phenom. After costing the latter the World Heavyweight Championship, he accepted HBK’s challenge on one condition.

Shawn Michaels had to put his career on the line for this rematch. This Career vs. Streak Match was the headliner for WrestleMania 26 and found a way to live up to what the two men accomplished the year prior. It was a deeply emotional encounter that felt like it could go either way. The Undertaker hit a jumping Tombstone to defeat Michaels and end his career.

The Undertaker and HBK somehow were able to have outstanding feuds in two different decades. They were the two icons who helped WrestleMania move into the stadium era. It felt big time when they stood across the ring from each other, so Michaels retiring against The Phenom was just right. That’s why The Undertaker vs. Shawn Michaels is the best retirement match in WWE history.