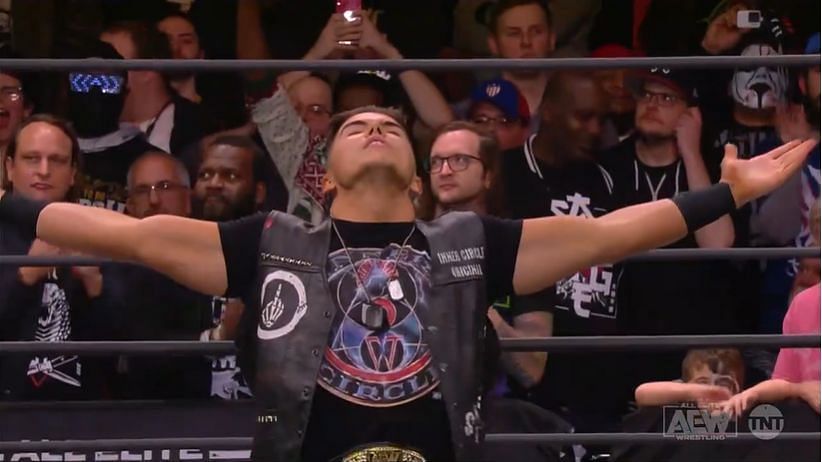 AEW Rampage was not as bold or boisterous as Dynamite this week, but it definitely had its moments.

Aside from a terrific tag team match between FTR and the combination of PAC and Penta El Ziero M, there was some advancement of a storyline in the women’s division that – for once – doesn’t involve Britt Baker.

Having said that, let’s do a deep dive and check on three things that stuck out on this week’s episode of AEW Rampage.

#3 Thunder Rosa is ridiculously over with the AEW audience

When the earrings come off, sh*t goes down 😬 #AEWRampage https://t.co/dK2duIB5ex

The former NWA World Women’s Champion has received nothing but love since she arrived in All Elite Wrestling. It continued on Friday night as she had to play the hero role to save a fellow performer.

After scoring a quick win on AEW Rampage over Janai Kai, Jade Cargill couldn’t stop there. She went for a post-match beatdown before Rosa made the save. Fans were clearly behind her all the way, and she remains one of AEW’s most popular female performers.

It really looks as if the TBS title tournament will come down to Thunder Rosa vs. Ruby Soho in the finals. As much as the fans love Ruby, don’t be surprised if the vast majority of them will be pulling for Rosa.

The TNT Title is one hot commodity 🔥 #AEWRampage https://t.co/hrBHa7IhUH

It was a very solid performance by Nese as he took Guevara to his limits at certain points in the match. However, The Spanish God would prevail in the end.

Guevara, Chris Jericho‘s protege and golden boy of the Inner Circle, has really made a name for himself. He’s no longer that fresh-faced kid who entered the promotion over two years ago. He’s now a legitimate star and one of AEW’s ‘four pillars.’

Guevara has only scratched the surface in terms of what he is capable of. Both as a wrestler and as an all-around performer.

As he continues to grow in front of our very eyes, it will be fun to witness his development.

We are not trynna reap anything from this man 😅 #AEWRampage https://t.co/lSxCCRR3SW

For several years now, Kingston has been known as one of the very best promo guys in the industry. Now, he’s getting the opportunity to showcase that to a global audience.

Kingston’s ability to convey emotion is very rare, and when he speaks in an interview segment or in the middle of the ring, everything feels like it’s coming from the heart.

He has gained a lot of momentum among the fans, be it from his close friendship with the popular Jon Moxley, or the passionate article he wrote recently in The Player’s Tribune. Kingston has connected with the crowd, and he’s a typical underdog hero.

This is very deserving as Kingston sometimes toiled away in obscurity as he watched many of his friends get signed to WWE and go on to achieve big time success.

This week’s AEW Rampage episode was fairly uneventful, save for a handful of moments. This felt more like a preview for next Wednesday night than anything else.

Still, it was a solid show that deserves a passing grade. Nothing spectacular, but nothing stuck out as terribly wrong, either.

What did you think of this week’s episode of AEW Rampage? Share your thoughts in the comments section below.